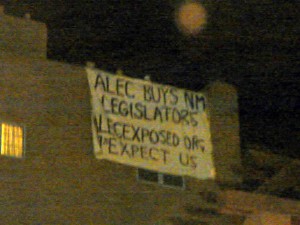 Smart ALECs Get Their Due The news in the past week has been heartening to those who see the transparently corrupt nature of ALEC, an organization that works with legislators to come up with and push pro-business legislation on the state level.  Corporations pay up to $25,000 to get in on the action.

The group, formally the American Legislative Exchange Council, has been slammed for its ties to the “Stand Your Ground” law at the heart of the Trayvon Martin mega-story. Police in Sanford, Florida, cited Florida’s version of SYG, which exists in various forms nationwide, as justifying its decision not to arrest the Neighborhood Watch volunteer George Zimmerman, who shot and killed the young Martin.

As a result of pressure, several large corporations—including Kraft, Coca-Cola, McDonald’s—responded to public embarrassment by backing away from ALEC. This has been applauded as a great victory by critics of ALEC, a progressive coalition that notably includes the Center for Media and Democracy, which has been the leading force in bringing ALEC and its activities to public attention.

It certainly is a victory of sorts. But it’s clear that the corporations’ reaction is no more than a public relations move in the face of a scorching hot controversy. It’s too steamy in that particular kitchen. For now.

The reality is that many big corporations just looove ALEC. In fact, they are ALEC. ALEC is a front for corporate capital and its corrupting influence on the democratic process. And that fact won’t go away when the Martin case spotlight moves on. Proof is in the statements the companies made.

Its involvement with ALEC, Coke said,  was “focused on efforts to oppose discriminatory food and beverage taxes, not on issues that have no direct bearing on our business…”

Those “discriminatory food and beverage laws” are, of course, intended to protect the health of Americans, including millions of obese people suffering from a tidal wave of diabetes and other illnesses.

Kraft, another junk food king, disingenuously said it was not going to renew its ALEC membership “for a number of reasons, including limited resources.” Ha! $25k is about the best deal such an outfit could get for staving off public health and packaging legislation. Kraft’s annual profits customarily exceed $4 billion dollars and keep on climbing.

Not long ago, before the Trayvon Martin shooting, when I was visiting New Mexico, I learned that ALEC was hosting a dinner for local legislators. Curious to find out who attends events put on by this group, I visited the restaurant (so did Occupy Santa Fe). Not surprisingly, most of the legislators in attendance seemed to be white Republicans.

Speaking with one of the lobbyists at the soiree, I got a quick sense of the deal. He was a young Latino, excited to be in the political and corporate arena and on his way up in a system that has not traditionally been very generous to Hispanics; he was clearly flattered that people from afar had taken an interest in him and invited him to this shimmering dinner at such a posh place, where the smell of money was almost palpable.

He seemed a nice enough fellow, and his smile and amiability suggested that nothing was amiss. But while ALEC may be good for his employers, whoever they are (perhaps those concerned about “discriminatory food and beverage taxes”), it’s less clear that the legislative priorities of ALEC’s members are good for the public, or for Latinos, who make up 42 percent of the New Mexico population.

Indeed, check out this report about Obesity and Overweight in New Mexico. Among other things, the report notes that the number of adults who are obese has doubled in the last couple of decades, both in New Mexico and throughout the country. In case we’re not clear on the causes, the report reminds us that “Obesity and overweight result when energy intake (calories from foods and beverages) exceeds energy expenditure (calories the body uses for normal functions and physical activity).”

If the rest of us used a fraction of the energy per capita that ALEC and its fast-food friends devote to turning us into giant blimps, we’d all be a lot thinner.

But the American Legislative Exchange Council has fingers in more pies than fast-food calorie bombs. The group is also involved with voter identification laws whose implicit objective is to discourage turnout from sectors of the population that typically would not be characterized as loyal corporate voters—including, notably, Latinos. And guess who else funded ALEC until they backed off in the current firestorm? Intuit (which makes financial products like Quicken and—relevant this week, TurboTax) and the Gates Foundation. (The Gates FOUNDATION—that’s supposed to be the philanthropic arm, not the predatory commercial wing, of Microsoft.)

The term “legislative exchange” must be an inside joke, with the “exchange” not being among legislators, but between those who have the money and those who want it. And ALEC is just the currently most visible arm of one of the most threatening power grabs by big money ever seen.

As the 2012 election season unfolds, investigative reporters are being advised about the multiplicity of new avenues for corruption of the political system in the wake of the Citizens United decision—and not just on the federal level. As staffers from the National Institute on Money in State Politics write in the current print magazine of the journalists’ organization Investigative Reporters and Editors, there’s a flurry of activity to be concerned about. Among the issues the article pinpoints:

-State supreme court races are really in play, since unlimited funds may now be spent advocating for or against candidates, as long as it’s done “independently.” The authors mention the likelihood that long-time justices, many of them honest and independent-minded, could be thrown out for rulings on controversial issues.

-New ballot measures: “Look for out-of-state money pouring into ballot committees….” The authors don’t say who would likely be pouring massive amounts into other states’ races; while some funds would undoubtedly be from those seeking to influence hot-button issues like marriage equality, the biggest money is likely to come from corporations concerned with regulations and ordinances they find onerous.

-“Check the top industry contributors to campaigns in multiple states. Is there a pattern, perhaps an orchestrated effort to change policies in favor of a particular..industry?”

-“Is a candidate primarily financed by in-state or out-of-state money?”

See where this is going? After compromising the federal government as much as possible, you push for “states’ rights,” and then you go to work compromising one state legislature after another.

There are virtually unlimited funds available to buy the system, and from the corporate point of view, it’s much cheaper to pay pennies on the dollar for friendly votes than it is to institute working-place safety measures, take good care of your customers, produce quality products, and compete fairly in a truly open marketplace.

[To find out what’s being done to fight back against the purchasing of democracy, check out sites like Common Cause and Public Campaign.]