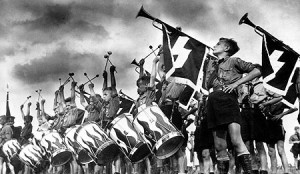 The other day, driving to visit friends, I found myself flipping from one angry right-wing radio station to another. The simplicity, distortions, bile toward the poor and less fortunate, the rhythmic seduction that dominated the talk–it made me shudder.  And this was just California.

The following day, my hostess happened to mention, by chance, a novel she was reading, Ursula Hegi’s Stones from the River. She had been struck by a passage in which a teenaged German girl is taken to a rally shortly after Adolf Hitler took power.  It resonated with her, and she said made her think about America today.

It made me also think of some of the presidential candidates queuing up, and of the talk I’d heard at a recent right-wing bloggers’ conference I’d attended.

He was not nearly as tall as she’d expected from newspaper photos, and he looked straight at her when he talked….Hitler’s mouth moved independently of his eyes. There was something wrong with his face: the features didn’t work together. But he looked directly at her — at everyone in the swollen crowd — like a magician performing some amazing trick of singling out everyone at once, and it was that gaze — filled with an immeasurable greed — that held all of them while his high-pitched voice spun silken ropes around them.

She fought the excitement of his gaze and voice because what he wanted from her was only too familiar — belief without doubts — something she’d resisted since first grade.

She fought him by reminding herself what her father had said…that they lived in a country where believing had taken the place of knowing….. Trudi had a sudden image of…. [t]he greed she’d felt in [Hitler], the greed which had sucked all those people into his influence, was still in the room with him, and she was seized by a deep fear for the world.”