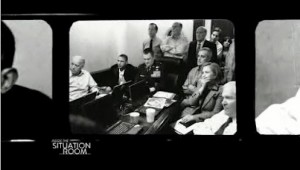 Osama, Obama, and Us: A Shocking Display of Propaganda from NBC When I got an email announcing an exclusive from NBC about the raid that, we’re told, resulted in the death of Osama bin Laden, I dared raise my hopes. The last time a major media organization, the New Yorker, had promised us the inside story about what really happened on that day in early May, 2011, we got a major bit of disinformation.

But, being an optimist, I set my TV to record the hour on NBC’s newsmagazine show, Rock Center, and went out to dinner. When I returned, I settled in and began watching.

I heard the dramatic music, and listened to correspondent Brian Williams’s dramatic intro. Then I began waiting for answers. I waited. And waited. The answers never came. Can you believe an entire hour (or about half an hour plus endless ads) and not one interesting revelation? Can you believe that almost the entire thing dealt with how people in the White House felt that day, what kind of chairs they sat in, etc, and almost nothing on the details of the raid or the disposition of the body? Even the details that sounded vaguely interesting, like the fact that the chopper that crashed was some kind of new, secret craft, were already known long ago.

I got a feeling that the whole thing had been carefully rehearsed, and then I thought: Why would the White House give NBC an exclusive, “first-time” look inside the White House Situation Room? Well, in part because it’s just a room with chairs and flat screen TVs—absolutely nothing interesting. But why even offer this purported exclusive insight into the raid? Because it was nothing of the sort. Because it was propaganda to make these people look good, to quell reasonable doubts about what really happened that day, and to get the president and his team re-elected.

That’s it. If you would like to judge this yourself, be my guest. Here’s the show, blessedly without most of the ads:

Did you see Williams asking any of the scores of questions one might ask: about how no one in that crashed helicopter was hurt; about whether Osama was armed, and if not, then why he had to be killed instead of captured and interrogated for the valuable information he could offer; about how and why the SEALs’ headcams purportedly failed at the critical moment and prevented the White House group from seeing what was going on; about why the body had to be thrown in the sea—and before proper DNA verification was possible; about the wildly conflicting accounts of what took place and the White House’s failure to this moment to explain; about…I could go on and on. But we’ve already laid all that out—you can read those questions here.

Probably the only interesting thing in the entire report was that Vice President Biden fingers a rosary bead when he’s nervous—or maybe that they ordered in pizza while waiting for the raid.

Oh, and one more lesson—that all those people must think we’re really, really, stupid.

Hope NBC reports this as an in-kind donation to the Obama campaign.

I would hope that Mr Baker wasn’t expecting anything other than lessons he concluded this article with in the viewing. What I wonder is if Brian Williams had read Russ Baker’s earlier column on eye witness accounts of the raid and “got educated” or if the Williams of this world prefer just to remain in the bubble that the Meme Strategical Messengers create and therefore avoid an existential crisis?

The perpetrators of 9/11 need to keep a scary boogy man around, since they could no longer use Bin Laden. People were getting too skeptical after not seeing him for 10 years. So it was time to get rid of him. Obama was being pressured on his birth certificate, so it was time to play the Bin Laden card.

Bin Laden was reported as dead from kidney disease in 2002. The SEALs may have killed one of his doubles. That would explain why it was so necessary to quickly throw the body in the sea, and permit no independent DNA testing.

It would be a nice life for some guy – living in a compound for free near the Pakistan military school, with 3 wives, have some kids, and pretend to be Bin Laden. The wives may have really thought he was Bin Laden, that they were marrying a “hero”, and entitled to share in the family fortune.

How intelligent can these ladies be, living with a wanted terrorist and drone strike target? Not to mention sharing a man with 2 other wives. We need to compare the DNA of any of the children, with known Bin Ladens. We need to see the real estate transaction papers of the Abbotabad compound.

And yeah, this whole thing is a multi-skinned onion type deal.

But the Osama myth keeps being constructed… he was such a good employee, they probably have him in some fine retirement resort in Saudi Arabia by now…

9/11 is like a hamburger. The more you look into how it was manufactured, the more likely you’ll have a change of heart and mind and stomach.

“….Then I began waiting for answers. I waited. And waited. The answers never came.”
Brian Williams reported in 2003 that “anonymous White House sources” had stated that the Amerithrax powder had tested positive for bentonite linking it to Iraq’s stockpile, later completely disproven and therefore was nothing more or less than intentional disinformation crafted to mislead the public into supporting the fraudulently conceived invasion and occupation of Iraq.

I have been waiting and waiting for Mr. Williams to clear that matter up and perhaps give up his lying sources but he has yet to be forthcoming.

Is that an unreasonable expectation of, you know, a celebrity “journalist” of national stature?

I still think they were just watching Chicago Bulls highlights on those TVs.

A bunch of liars.  I will not vote this year.  I’m too numb with all the lies.

It is like how two planes bring  down three towers?

it was a miracle

“Oh, and one more lesson—that all those people must think we’re really, really, stupid.”

And incapable of figuring that out as well.

Here is a summary of the whole hoax being perpetrated upon us by these Neo-Con PNAC assholes:
http://www.youtube.com/watch?v=yuC_4mGTs98