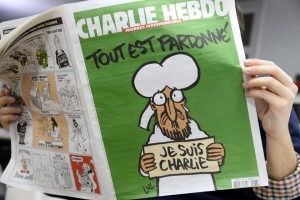 “Je Suis Charlie” and “Boston Strong” are too close for comfort for Dzhokhar Tsarnaev’s defense team.

The recent media-drawn parallels between the Charlie Hebdo attacks in Paris and the Boston Marathon Bombing could re-inflame passions among potential jurors in Tsarnaev’s trial, his attorneys argued in a motion asking U.S. District Judge George O’Toole Jr. to suspend jury selection for at least a month.

In the motion filed on Jan. 13, Tsarnaev’s attorneys say that:

even before the Paris attacks, there was no modern precedent of which we are aware for attempting to seat an impartial jury in a community that had been so recently, so grievously, and so widely affected by a single series of crimes. Now, at the very moment that this attempt is to be made, the Boston bombings are being newly placed at the center of a grim global drama. At a minimum, the Court should pause long enough to let this latest storm subside.”

The parallels between events surrounding the Paris attacks and the Boston Marathon Bombing are close enough to Boston for the kind of facile, surface-level comparisons that quickly gain traction in media accounts.

For example, on Jan. 7, the third day of jury selection, terrorists killed 12 people at the offices of the magazine Charlie Hebdo. The next day, a policewoman was fatally shot in another related Paris attack. On Jan. 9, four hostages were killed by a terrorist at a Paris kosher grocery store. The suspects in the Charlie Hebdo attack, who were killed later that day by security forces, were brothers.

Perhaps that’s the biggest reason why almost immediately after the attacks,

the press, politicians, and commentators drew parallels between the French attacks and the Boston Marathon bombing. The supposed parallels included the fact that the suspects were brothers, that they reportedly were influenced by the lectures and writings of Anwar al-Awlaki, that they were ‘home-grown’ terrorists, and that they attacked civilians in a Western city.

Then there is a potential government witness who’s made public statements about the similarities. Evan Kohlmann, a terrorism consultant whom the government plans to call to the stand in the Tsarnaev case, also weighed in. While he was quoted in USA Today as saying it was too early to determine how similar the two attacks are, the motion quotes him as saying that:

Obviously it’s tempting to look at the . . . suspects in France through the lens of the Tsarnaev brothers.

The other potential comparisons the defense thinks could affect the Boston jury include:

•  Area residents who attended a rally on Boston Common “in solidarity with France” were quoted in the New York Times as saying that the events in France “created more fear” and “gives [Tsarnaev] a global context,” and that some of those attending the rally held banners saying, “Boston is France” and “Boston Strong.”

•  A video presentation on CNN emphasized those parallels in particularly dramatic and graphic form.

•  WBUR quoted Congressman Bill Keating (D-MA) as describing the similarities as “almost eerie,” and detailing how the attacks resonate in Boston.

Even now, the “Boston Strong” slogan still resonates among Bostonians, and as WhoWhatWhy has pointed out, that kind of emotional sloganeering often acts to cloud more rational assessments of facts and events.

So with “Je Suis Charlie” now echoing in the media chorus alongside “Boston Strong,” it’s understandable that the defense is concerned that the remaining 1,000 or so potential jurors are hearing it, too.

Judge O’Toole, however, was unpersuaded. He denied the motion, stating that his “detailed review of the juror questionnaires in preparation for voir dire has confirmed, rather than undermined, my judgment that a fair and impartial jury can and will be chosen.”