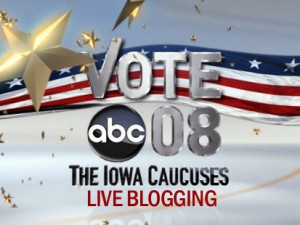 The conventional media love to baffle us with bullshit.

Following months of endless horserace reporting on the upcoming GOP caucuses in Iowa, they are now publishing warnings that…it is all virtually meaningless.

The takeaway from this is that the media are essentially admitting that they fill your free time with political “reporting” that is about as relevant as watching televised poker matches.

That, of course, is instead of figuring out what is deeply wrong with America and what can (maybe) still be done about it.

Big outlets like the New York Times, CNN and Politico serve up an endless junk food diet of polls, random street interviews, daily candidate posturing, and essentially flood the field with personnel. They give us the excitement of dark horses coming suddenly from behind, as in this, from CNN the other day:

A new survey of people likely to attend Iowa’s Republican caucuses indicates that former House speaker Newt Gingrich’s support in the state is plunging while former Pennsylvania Sen. Rick Santorum’s is surging, with support for Santorum more than tripling since the beginning of December.

According to a new CNN/Time/ORC International poll, 25% of people questioned say if the caucuses were held today, they’d most likely back former Massachusetts Gov. Mitt Romney and 22% said they would support Rep. Ron Paul of Texas. Romney’s 3-point margin is within the poll’s sampling error.

Meanwhile, Gingrich has plunged from 33% to 14% this month while Santorum grew to 16%. The poll’s release comes six days before the Iowa caucuses kick off Republican nominating contests.

Then, suddenly, with the days counting down to the all-important Iowa caucuses, a new refrain begins to play from the pipes. Iowa…means almost nothing.

…. In a state of three million people, a bare 119,000 Republicans showed up for the caucuses. Some 60% of them identified as evangelical or born-again Christians—­a far higher percentage than in any presidential contest in any large non-Southern state that year.

A day or so later, we get a similar, if more entertaining version, from the New York Times’ columnist Gail Collins.

Only days until the Iowa caucuses! Can you believe it? Less than 8,000 minutes to go!

Perhaps this would be a good time to point out that the Iowa caucuses are really ridiculous.

Not to blame Collins, who is a fine essayist and humorist, but her paper is a huge part of the problem. Using the Lexis-Nexis articles database, searching only the New York Times for articles with both the words “Iowa” and “caucuses,” during the most recent 90-day stretch, I got 409 results. (Not all are entirely or principally about Iowa, but many of them are.) Between just Christmas day and the 29th (five days) I counted 24 different reporter-writer bylines within these results.

Why do they now tell us it doesn’t matter? Because, having filled their pages with entertaining horse race material, they now  (You choose): (a) realize they’re doing everyone a disservice; (b) can cynically put themselves into the “responsible” camp at this late date; (c) might like to stop certain candidates who are surging in Iowa by dampening interest in the result.

Whatever this is about, and most likely it’s about nothing but numbers, and low hanging fruit, and laziness, what we have here is: “look—look—look—look—…. Why are you looking? Nothing useful here!”

Why does this matter that the media wastes so much of its energy and our bandwidth with nonsense? Because it keeps us from asking the important questions. Like: Is the GOP so shallow and—well, dumb—that this cast of pathetic characters is the best it can find? Or are they conceding the election to Obama and making Jeb Bush look positively presidential by comparison?

With such zaniness, it’s all great fun, of course, a good substitute for watching football or professional wrestling. But, tell me again: what does it really have to do with the price of bread—or the next war on the horizon?