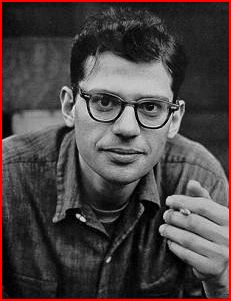 Sanity – a trick of agreement.

What if someone gave a war and nobody came?

To gain your own voice, forget about having it heard.

Poetry is not an expression of the party line. It’s that time of night, lying in bed, thinking what you really think, making the private world public, that’s what the poet does.

They censor words not the things they denote: It would create less of a stir to drop a piece of shit on Grant’s tomb than to write it out in white paint.  Because people recognize that’s what memorials are for–old bums & dogs to shit on.

I don’t think there is any truth. There are only points of view.