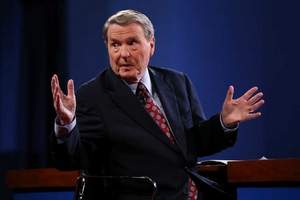 Watching the first presidential debate, this thought went through my mind: What are these guys talking about?

I had virtually no idea, and the moderator, Jim Lehrer, apparently didn’t either.

That those of us who cover politics can barely follow the claims and counterclaims of the candidates should serve as a warning.

These debates, even these campaigns overall, are a far cry from educating the public about anything—what the options are, what the real differences are, what each candidate really wants to do and is even able to do, what is likely to be the outcome of all this rhetoric and parsing.

There are real differences between the worldviews of the two parties, and between what the backers of each candidate (if not the candidates themselves) want to happen in this country. Yet the current system is not an effective one for communicating, clearly and reliably, how this will all shake out—and affect ordinary Americans.

The media, by and large, are left to argue over who “performed better,” or who “won” that round, rather than to tell us what we need to know. And certainly it’s easy to get worked up about Romney’s masterful job of thoroughly mixing up what he stands for, and Obama’s inability to sound animated or express outrage at Romney’s sudden turn into a deeply compassionate person—in complete contradiction to his policy proposals.

What can we learn from this first presidential debate? That we urgently need better journalism. It’s our job to study not just the candidates, but the system itself, and try to explain, coherently, how things work. And what it will take to change how things work.

All of you pay for those debates and for the campaigns themselves—if not through campaign contributions than by buying the products that bracket the debates and enable the networks to run 90 minutes of commercial-free fare.

What will you pay for good journalism? Only a handful out of the thousands who regularly read what we at WhoWhatWhy produce bother to make even a small contribution to support its continuance and expansion. But, as the saying goes, you get what you pay for.

If it’s important to you that this country move beyond confusing rhetoric and spectacle to clarity and a truly informed electorate, you need to invest in institutions that can move us in that direction.

Please take a minute to support our work—and to help us do more of it.