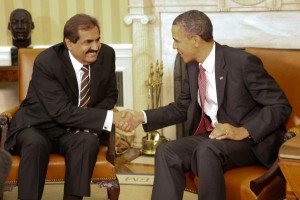 President Obama with the Emir of Qatar, big boss of Al Jazeera

How reliable, really, is Al Jazeera? A lot of people, sick of the superficial and officially-inspired “reporting” found in the Western corporate media, have turned with enthusiasm to the news newcomer¸ a Middle East based tv outfit that employs feisty journalists and often produces on-the-ground reporting not found elsewhere.

That’s great, as far as it goes. But what is Al Jazeera, who is behind it, and to what extent should we count on it to report the news with neither fear nor favor?

First thing to note is that the network is the creation of the royal family of the tiny, natural gas-rich emirate of Qatar, one of the most affluent countries in the world. Next, let’s look at the actions and aims of Qatar itself, and then at how Al Jazeera coverage does or does not deviate from those aims.

We start with Libya. Qatar, which is already known to have helped fund the Libyan rebels by marketing their oil,  has just publicly announced that rumors it had troops and special forces operating in Libya were true—basically bragging that it had a central role in bringing Qaddafi down.

According to The Guardian:

Qatar has admitted for the first time that it sent hundreds of troops to support the Libyan rebels who overthrew Muammar Gaddafi’s regime.

The Gulf state had previously acknowledged only that its air force took part in Nato-led attacks.

The revelation came as Qatar hosted a conference on the post-Gaddafi era that was attended by the leader of Libya’s ruling National Transitional Council, Mustafa Abdel-Jalil, who described the Qataris as having planned the battles that paved the way for victory….

It also has emerged that now the fighting is over, Qatar is to lead international efforts to train the Libyan military, collect weapons and integrate often autonomous rebel units into newly established military and security institutions – seen by the UN and western governments as the key challenge facing the NTC.

Qatar played a key role in galvanising Arab support for the UN security council resolution that mandated Nato to defend Libyan civilians in March. It also delivered weapons and ammunition on a large scale – without any clear legal basis.

Why is Qatar making this public? Because it’s all about hearts and minds—the corporations behind the land grab know that it is important to sell this to the public as an indigenous Middle Eastern thing with the West just “helping out” for “humanitarian purposes.”

Indeed a leaked plan from months ago for post-Qaddafi Libya includes a carefully thought-out proposal for avoiding the mistakes made in the Iraq occupation—including an initial occupying force “resourced and supported” by the United Arab Emirates, with essentially no (visible) Western “boots on the ground.”

What’s interesting about Qatar’s role is that it had no actual beef with Qaddafi—nor any direct national security motivation for doing what it did. No, it did it as a favor to the Western countries that wanted Qaddafi out. Because with Qaddafi out, and Arab Spring making things dicey, the Western militaries that protect the families that essentially own entire countries and their oil supplies get a new place to base their troops. This, of course, is crucial to the survival of the Qatari emir and similar dictators.

What then of Al Jazeera, which was started and funded under the emir’s authority and operates from Qatar?

If you look carefully at its recent coverage, you can see the extent to which it operates with the Emir’s interests in mind—more often than not, also in accord with Western objectives when they don’t seriously conflict with the Emir’s.

Perhaps you’d like examples? The biggest is Al Jazeera’s compliance with the sheep-like behavior of nearly all major Western news organizations in falsely describing the Libyan intervention as humanitarian in nature—and fully participating in disinformation designed to weaken Qaddafi and build international support for his ouster. (For more of what you did not see on Al Jazeera, see our Libya Primer. Then, if you’re motivated enough, check out Al Jazeera’s website and see what the thrust of their Libya reporting was. Almost no questioning of the NATO line—indeed, hook, line and sinker. Bingo! A lot like CNN’s.

Meanwhile, consider the extent to which it ignores anything that could give problems to the Emir’s fellow dictators over in Saudi Arabia. For example, WhoWhatWhy had a p.r. firm send our big story with major new revelations on ties between the Saudi royal family and the 9/11 hijackers, to dozens of Al Jazeera reporters and producers. Not one of them followed up.  It can’t be the content–which is surely of great interest to its core audience. (We know that because we see visitors from the Arab and Muslim world coming to our site with growing frequency—hungry to know what is really going on in their own countries, and why. In that sense, they’re just like Americans.)

Qatar-run Al Jazeera is not going to mention anything that could raise questions about the Saudi elite, which is a parallel of its own elite as oil producers and non-democratic rulers.

Similarly, Al Jazeera did not properly cover the uprising in nearby Bahrain, another oilagarchy, where Qatar helped Saudi Arabia put down democratic protests that threatened Bahrain’s royals. And it did not properly investigate the wild inconsistencies and outlandish claims in US accounts of the raid that purportedly killed Osama bin Laden—including the odd, little noticed claim that the US dumped Osama’s body into the ocean in part on advice from Saudi intelligence.

As if Al Jazeera was not already dancing to the Emir’s tune, consider seemingly reliable rumors that the next head of Al Jazeera will be….the Emir’s eldest son. Don’t tell us controlling information and public perceptions is not crucial to that family’s survival.

More important than the self-serving purpose of Al Jazeera for its royals, we might ask to what extent Al Jazeera (and Qatar itself) serve as just another front for Western oil producers’ efforts to make sure they remain the “one percent”? Al Jazeera is itself a brilliant stroke in the disinformation battles—an “alternative” to Western news that is still controlled ultimately by the same interests.

As The Guardian noted (without bringing Al Jazeera’s coverage into the mix—The Guardian and Al Jazeera appeal to a similar audience):

For some analysts the emir’s strategy is to support democratic forces selectively in the Arab world, partly to improve the country’s international standing while diverting attention from the Gulf, where anti-regime protests have been crushed in Bahrain and bought off in Saudi Arabia.

We can root for Al Jazeera’s journalists to do their best, while remaining wary of the sponsorship of this outlet.