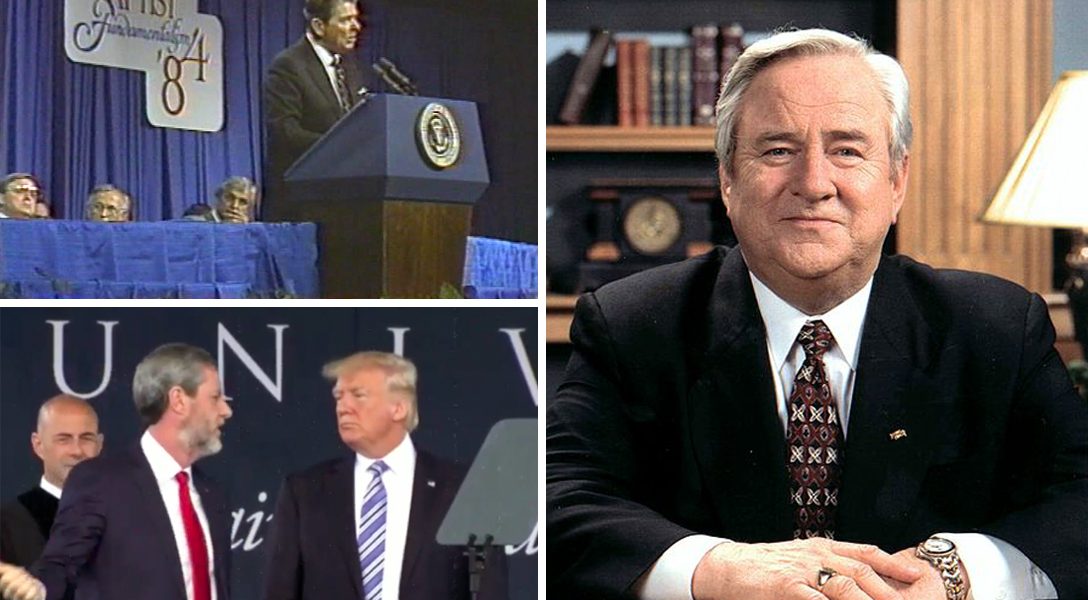 Trump and Evangelicals, the Culmination of an Unholy Alliance

To an objective observer, it might seem odd that President Donald Trump received a hero’s welcome at Liberty University Saturday. However, the religious right’s idol-worship of the president is only the latest chapter in a long history of conservative Christians selling their souls for 30 pieces of silver, which, in American politics, is a seat at the table.

President Trump was invited to deliver the commencement speech for the graduating class of 2017, the second time a sitting president has done so since George H.W. Bush gave the address there in 1990.

Jerry Falwell, the legendary televangelist and conservative leader who died ten years ago yesterday, founded the university in 1971. Located in Lynchburg, Virginia, Liberty University is well known as a bastion of conservative, fundamentalist evangelicalism.

For nearly four decades, evangelicals and the GOP have maintained a strong alliance, the seeds of which were planted by the late Falwell. They shared policy positions and goals such as wanting small government, a strong military, pro-life, pro-Israel, pro-Second Amendment, favoring supply-side economics, and being suspicious of multiculturalism.

Over the years, Falwell helped grow Liberty into the largest Christian university in the world, with over 80,000 online students, a $1.1 billion endowment, sprawling 7,000 acre campus, and a soon-to-open campus gun range.

The school has become a mandatory campaign stop for would-be Republican politicians. Texas Senator Ted Cruz chose Liberty as the place to announce his presidential candidacy in March 2015. And Trump’s May 13 commencement address was the third visit for the president. Last January, he made a campaign stop on the campus right before the Iowa caucuses.

You could forgive those who had a hard time picturing the reality TV star as the embodiment of piety.

During his speech on Saturday, he made a point of expressing his gratitude to his local supporters. With good reason. “And I want to thank you, because boy did you come out and vote,” said the president, speaking to LIberty’s packed football stadium.

On Election Day, 81% of white evangelical Christians voted for Trump, a slightly higher percentage than their previously overwhelming votes for the past three Republican presidential candidates.

Pundits were not entirely sure how the evangelical vote would turn out, considering Trump’s known baggage: twice divorced, previously pro-choice and in favor of universal healthcare, and feeling the heat from the recently leaked Access Hollywood “grab them by the pussy” remarks. (Jerry Falwell, Jr., the current president of Liberty, blamed the leak on a conspiracy of GOP establishment leaders.)

Indeed, some evangelical leaders, such as Southern Baptist president Al Mohler, expressed grave concern: “But I could not possibly be consistent and somehow vote for someone whose character I believe eclipses Bill Clinton on so many of those very same concerns.” He later referred to Trump as a sexual predator.

“Donald Trump is a deeply ambivalent hero for any religious movement, whose only explicit religious beliefs seem to be impulses rather than a deeply-held worldview and whose spiritual loyalties seem malleable,” Professor Kate Bowler, who teaches church history at Duke Divinity school, told WhoWhatWhy.

But by and large evangelical leaders got behind the billionaire tycoon, including Franklin Graham Jr., the son of Billy Graham; Focus on the Family’s James Dobson; 700 Club founder Pat Robertson; theologian Wayne Grudem; and of course, Jerry Falwell, Jr.

At the Liberty commencement, after prayers, the pledge of allegiance, and the singing of the national anthem, Jerry Falwell Jr. introduced the president: “I do not believe that any president in our lifetimes has done so much that has benefitted the Christian community in such a short time span than Donald Trump.”

For his part, the president reminisced about Reverend Falwell, Sr.:“I used to love watching him on television, hearing him preach. He was a very special man.”

Outsiders may have trouble understanding the evangelicals’ embrace of Donald Trump. Yet the symbiotic relationship between evangelicals and the GOP stretches back to the 1970’s, just before Ronald Reagan’s election. A Georgia Peanut Farmer and “The Moral Majority”

In 1976, Jimmy Carter seemed like the evangelicals’ dream president. A peanut farmer from Georgia who taught Sunday school every week, he was widely seen as a person of integrity — likely one of the reasons he was elected in the wake of the Nixon-Watergate scandals.

Carter was very open about his Christian faith, and many evangelical leaders had high hopes for him. Bailey Smith, a mega-church pastor from Oklahoma, said that the country needed a “born again man in the White House. And his initials are the same as our Lord!”

Jimmy Carter won the presidency as a Democrat, and Newsweek magazine declared 1976 the Year of the Evangelical.

An admirer of President John F. Kennedy, Carter was instrumental in the historic peace agreement between Egypt and Israel in 1978, known as the Camp David Accords, and he was a strong advocate for civil rights, a commitment that went back to his farming days in Georgia.

But increasingly, evangelicals found themselves uncomfortable with Carter’s politics and policies, especially his stand on civil rights. The history of slavery, Jim Crow, and segregation in the south was intimately tied up with churches that condoned it for generations. The genesis of the Southern Baptist denomination itself was born out of a split over slavery, with the northern Baptists siding with the abolitionist movement.

It took the Southern Baptist church until 1995 to formally renounce slavery and segregation, and to issue an apology for their long-standing failure to support the civil rights movement.

Indeed, Jerry Falwell Sr. was a vocal opponent of Brown v. Board of Education, though he later repented of his sin.

While opposition to desegregation was common among evangelicals, it wasn’t the only issue at play. Many evangelicals thought that public schools were forcing a kind of “secular humanism” on their children, indoctrinating them with belief systems antithetical to their own.

Other important factors in the evangelical disaffection with the Democratic Party were abortion, the Equal Rights amendment, and gay rights. But it was a dispute over money that sealed the political alliance between evangelicals and the GOP.

During the 1970s, the IRS attempted to take away the tax-exempt status of Bob Jones University, an ultra-conservative Christian college in Greenville, South Carolina, because of its history of racial discrimination, including the failure to admit African-American students, and later prohibition of interracial dating.

The possibility of losing their tax exempt status was a threat to many private Christian schools throughout the south and midwest, many of whom were on a tight budget. Jerry Falwell was incensed and used the collective outrage of southern evangelicals to organize vocal political opposition to what he saw as extreme government overreach.

Falwell’s influence and power grew, and an alliance was forged between conservatives and evangelicals who were fed up with the federal government’s intrusion into their “religious” affairs. Falwell managed to focus their frustration against Carter, even though the IRS actions predated his presidency.

The alliance between religious and political conservatives found its ultimate expression in Falwell’s political organization known as “The Moral Majority.”

Despite its origins in opposition to desegregation and concern for maintaining tax exemptions for religious institutions, the Moral Majority fashioned itself as a pro-America, pro-family values political organization.

Its adherents were strongly opposed to abortion, and though Carter was opposed to it personally on moral grounds, he did not waver from the Democratic party’s support of the Supreme Court decision, in Roe v. Wade, permitting abortion under certain circumstances.

“Carter made a distinction between his private faith and what he would try to do in public policy that was hugely disappointing to evangelicals,” explained Professor Dowland from Pacific Lutheran University. “The thing that Carter didn’t do that these high-profile evangelical endorsers wanted him to do was to really champion an evangelical policy agenda in office.”

Falwell and his organization actively campaigned for GOP candidate Ronald Reagan in the 1980 presidential election, and raised money for TV and radio ads that targeted Carter.

“He [Falwell] showed himself to be more loyal to Republican politicians, particularly Reagan, than virtually any other evangelical leader,” said Dowland.

Reagan won the presidency in a landslide, and the Moral Majority became a force to be reckoned with. No longer could any presidential candidate afford to ignore evangelicals as a political power. Fast forward to 2004. The US is in the midst of a bloody conflict against insurgents in Iraq, one year after President George W. Bush’s “Mission Accomplished” speech. Americans are tired of the war and coming to the realization that the case for invading Iraq was based on lies.

Despite the bloodshed and deceit perpetrated by the Bush administration, the incumbent president won re-election. The consensus of journalists and political scientists was that many Americans, despite any doubts they might have had about the war, voted for Bush over the Democratic candidate Senator John Kerry because of what they called “moral values.” This translated into concern about abortion and gay rights, issues which divided Kerry from the evangelical voting bloc, who overwhelmingly rallied to Bush.

The disconnect between a “moral” vote for someone who initiated a pre-emptive war under false pretenses which led to hundreds of thousands of deaths remained inexplicable to many outside the faith.

But when evangelical zeal was translated into politics by the likes of Jerry Falwell, the result was a focus on maintaining traditional institutions and customs against what was perceived as a relentless assault by the forces of modernity .

As a consequence, the nearly 40-year alliance with the GOP has put evangelicals in the awkward position of supporting a president and political party whose policies would appear profoundly antithetical to many of their core principles.

They are preaching the Prince of Peace, who was a champion of outliers of all kinds, yet reluctant to denounce endless war and show concern for sexual minorities. They believe in God’s good earth but appear unconcerned about its environmental degradation. They warn of the dangers of money while lauding billionaire oligarchs and tax breaks for the wealthy. They teach compassion and care for the poor and sick but aligned with politicians whose actions belie their claims of empathy.

But these apparent contradictions did not prevent an overwhelming majority of white evangelicals from casting their vote for Donald Trump in the 2016 election. For many of them, “Make America Great Again” signified a cause they identified with, on the conviction that their economic duress and ever decreasing influence on popular culture were maladies that Trump could remedy, despite his not knowing the proper way to cite “2 Corinthians.”

As Dowland explained, “that nostalgia is implicitly connected to an era when white Christians had more control, and the ideal was assimilation, not multiculturalism.”

So evangelicals went to the voting booth in 2016 with their minds made up. Trump was on the right side of the issues they cared about the most.

“In the course of the campaign,” said Bowler, the Duke University professor, “Trump became the unlikely advocate for hot-button evangelical issues — a thrice-married man fighting for ‘traditional families,’ a sexual braggart at the helm of a purity-obsessed culture.”

And the students at Liberty who enthusiastically cheered Trump were following in a long tradition of evangelicals who have learned to redefine “moral values” in ways that would be unrecognizable to the founder of their own religion.