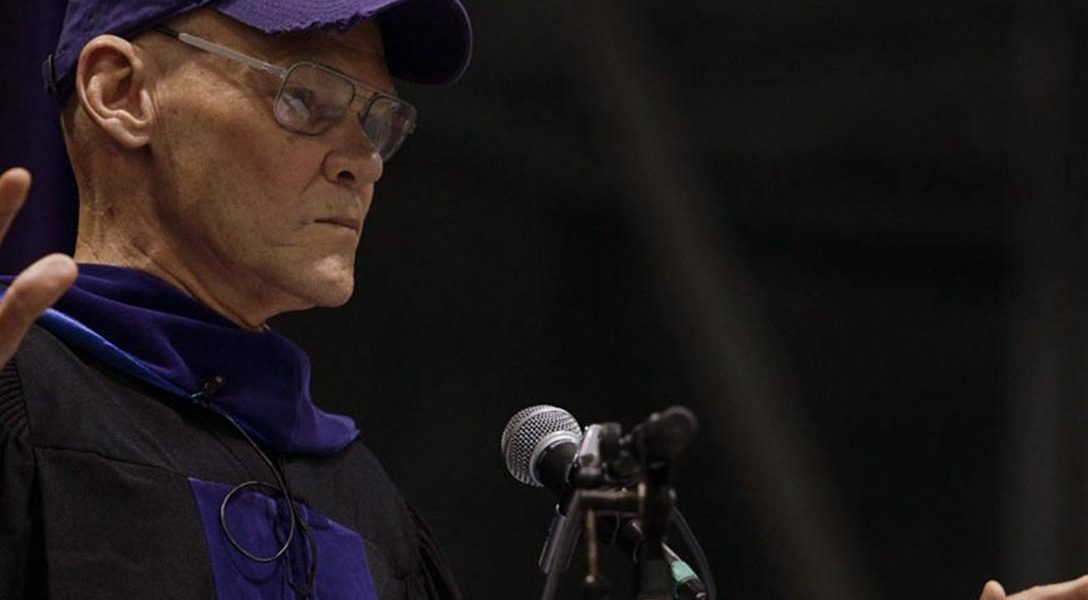 James Carville assails those who see education as a commodity in the new documentary “Starving the Beast,” by Steve Mims and Bill Banowsky.  Photo credit: Starving the Beast (starvingthebeast.net)
Education

Carville is a marble-mouthed authentic Cajun, and I wasn’t always sure quite what he was saying, but I got the drift. He’s mad as hell about the movement to fundamentally change the nature of a college education.

“They say education is a commodity,” Carville tells the crowd. “It’s a barrel of oil, it’s an ounce of gold, it’s a stock. It’s anything.”

Starving the Beast, by Steve Mims and Bill Banowsky, raises the alarm on a topic that most of us probably don’t think of as an imminent crisis: the future of public universities.

The subject itself comes, as do so many consequential developments, in plain brown wrapping seemingly designed to elicit yawns: under the rubric of “higher education reform.”

The film chronicles a battle being waged for the soul and future of America, between the advocates of a classical “liberal education”  and promoters of conservative, market-oriented philosophies.

Some of the latter think that it is a waste of taxpayers’ money to teach anything that does not appear directly applicable to a career. They believe that students ought to be treated as customers, charged full fare for an education focused on work skills, and be able to shop for professors based on survey rankings.

They want to see universities get out of the research business, and they want to eliminate tenure. And, to be sure, many also see in “liberal education” an agenda to seduce their children with strange and subversive ideas.

Universities have always been places where young adults were exposed to unconventional and alien cultures and viewpoints. This may now be changing.

Although the conflict has origins deep in our past, the current battle was joined where so many others have been — in Texas. Texas, after all, is the home of many textbook publishers, some of whom are revising both history and science. They even wield significant influence on the content of textbooks published outside the state. So, these publishers are dealing with those “strange” and “subversive” ideas early in a child’s life.

Former Governor Rick Perry, playing to strong conservative sentiment and presumably with an eye on higher office, picked up the arguments of a think tanker and sought to exert market-oriented control at two state institutions — Texas A&M and the University of Texas.

Starving the Beast debuted, fittingly, at the South by Southwest festival, in Austin, where UT is located and where the filmmakers live.

The academics interviewed in the film each seem to think they’re faced with a unique situation. But while the particulars vary, the extent of the issue is national. Beyond Texas, the filmmakers take us to Virginia, Louisiana, Wisconsin and North Carolina, among other places. And they have since reported hearing from people at a staggering 110 universities reporting their own struggles. Cuts in funding and challenges lurk everywhere.

It’s presumably no coincidence that Perry was not the only presidential aspirant to sense an opportunity in this fight. Scott Walker is one of the other main proponents of this “reform.”

The forces behind this movement are closely related to those who see liberal ideology everywhere as undermining traditional American values. The current attack on higher education is an echo of notions we first heard from Richard Nixon, Spiro Agnew and Ronald Reagan, amplified by George W. Bush and Sarah Palin, and finally sent bubbling over entirely with the 2016 crop of GOP candidates and the presumptive nominee, Donald Trump, all railing against “elites” and “political correctness”

Lurking in the background (although not, as I recall, mentioned in the film) are those who set out decades ago to “defund the Left,” led by the likes of the soon-to-be Supreme Court Justice Lewis Powell — in a now-infamous 1971 memo — and Pat Buchanan.

Today, of course, we have the Koch brothers and their spiritual brethren. Make no mistake: big money is behind this shift.  (And to see what else the Kochs et al are doing to dumb down the American people, please read this recent WhoWhatWhy article, Will the Radical War on Science Transform America?)

The spiritual godfather, front and center in Starving the Beast, is Grover Norquist and his movement to defund government altogether.

Although it’s pretty clear what the filmmakers think, they do pass the journalistic test of giving a fair hearing to those who openly admit they want to stripmine public education. Some of the interviewees, working out of well-funded, corporate-sponsored think tanks, are smooth talkers and know how to frame it all as being in the public interest. Others are more candid about their own values and worldview.

Says Frederick Hess of the American Enterprise Institute: “If somebody wants to write about sexually dystopian themes in 14th century epic poetry, I think that’s fine, [though] I have no earthly idea why taxpayers are supposed to subsidize this or subsidize students to learn it.”

One comes away with a clear sense that this bunch doesn’t want young Americans encouraged to think, and to question. Which calls to mind this line from the classic book “Propaganda,” by Edward Bernays, the father of modern public relations:

The conscious and intelligent manipulation of the organized habits and opinions of the masses is an important element in democratic society. Those who manipulate this unseen mechanism of society constitute an invisible government which is the true ruling power of our country.

There may be an “invisible government,” but since Bernays’s day, its operatives have increasingly come out into the open.

“The film chronicles a battle being waged for the soul and future of America,
between the advocates of a classical “liberal education” and promoters of conservative, market-oriented philosophies.”
I do support classical liberal education. However, the US public universities are far from delivering anything that resembles such.
In practice, both conservative and liberal are in support of state run (or heavily
influenced) higher educational system. Alternative options do not even cross
their minds. The state rarely serves public interest, people running it have
different agendas. Battle being waged is essentially which shade of mind control young people are exposed to.
From economic point of view public universities are a horror story. They can be
compared only with public health system; another system run fundamentally by
the state (seemingly private).
I would get state out of education business totally. Then “classical liberal education” can be restored. Similar approach applies to health system: public health can be restored when government leaves doctors alone.