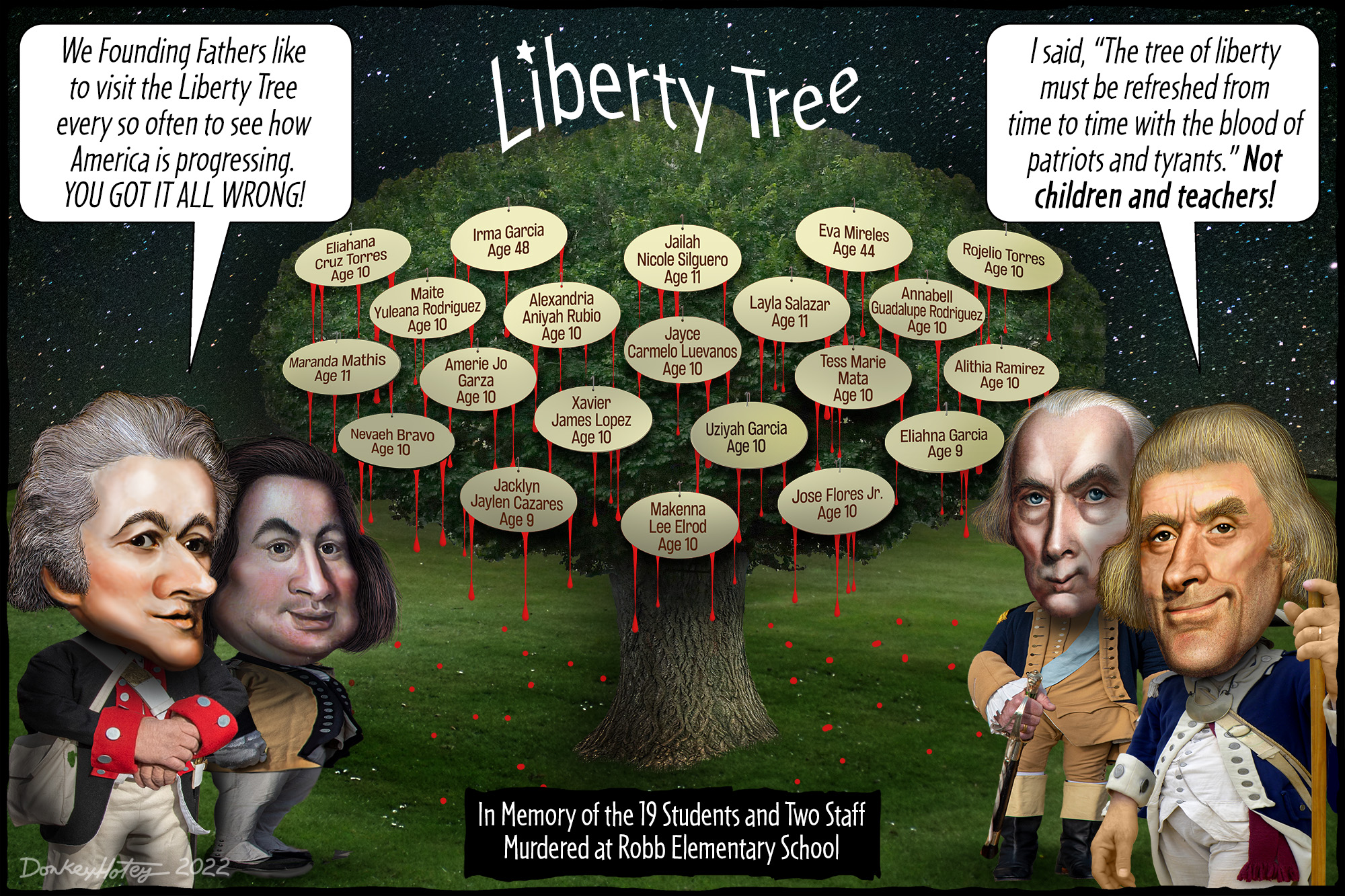 Would the Founding Fathers Have Sacrificed Kids for Guns?

The fight over whether US schools (or churches, synagogues, movie theaters, grocery stores, etc.) should remain target ranges for young men with virtually unrestricted access to weapons of mass destruction boils down to two issues: the intent of the Founding Fathers when they wrote the Second Amendment, and whether this even matters.

The latter seems fairly obvious: Once a society has evolved (or devolved, in this case) to a point that a bunch of dudes could not possibly have envisioned 250 years ago, it’s reasonable to make some changes to the rules they wrote back then.

Sadly, the radical minority that runs the US does not feel the same way. That makes sense once you consider that they also believe that a text written more than 2,000 years ago (and which may or may not be entirely fictitious) should dictate everything from who should die carrying a dead fetus to term to who should get to marry.

It’s as though a large swath of the population in the year 4000 will base its morality on the Twilight series.

To these people, it is all about the first question. What did James Madison et al. have in mind when they wrote: “A well regulated Militia, being necessary to the security of a free State, the right of the people to keep and bear Arms, shall not be infringed”?

In general, there are two schools* of thought**. On the one hand, you have Republicans, who are convinced that the Founding Fathers would have allowed the slaughter of children without batting an eye or lifting a finger to help them. 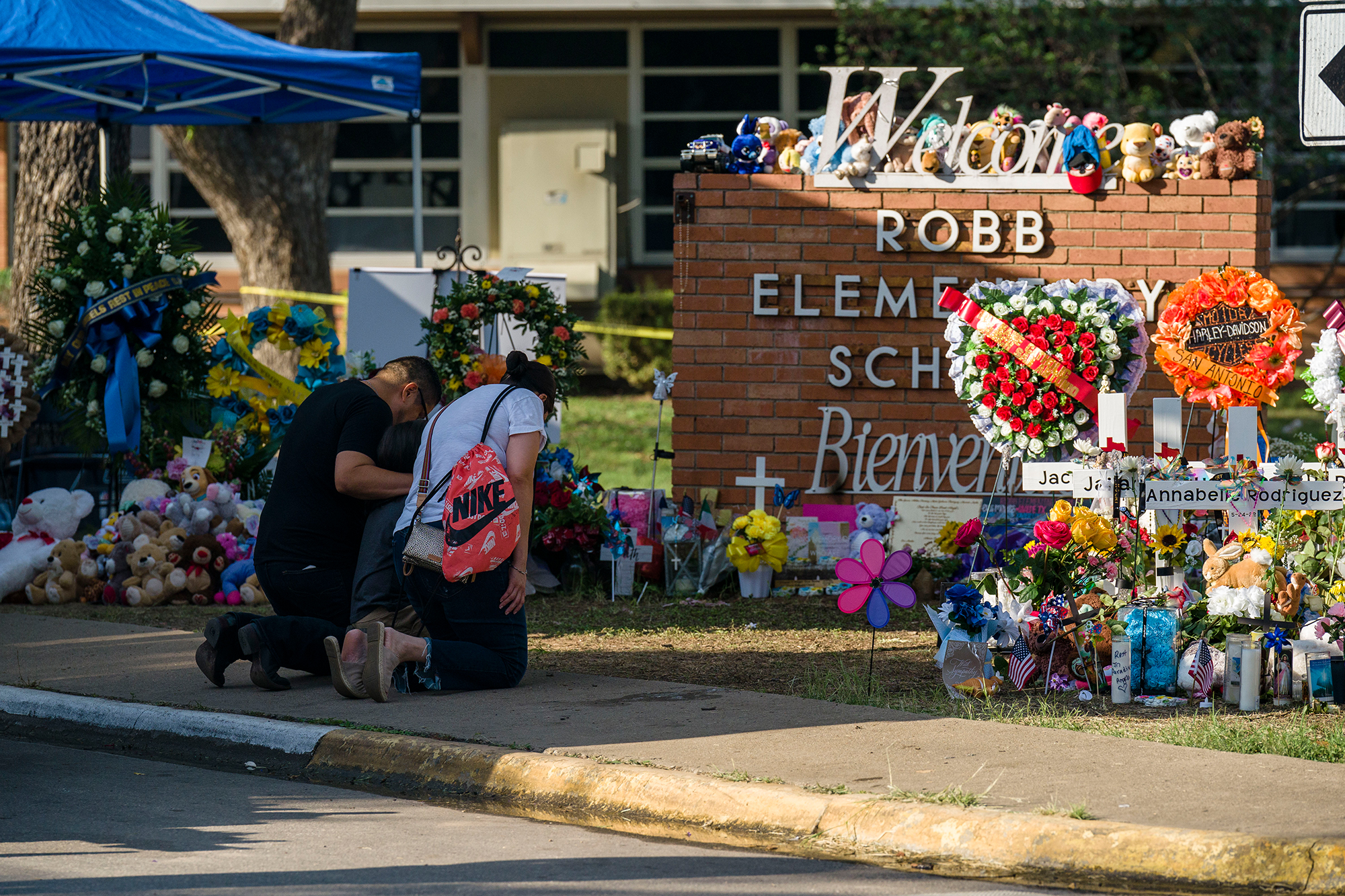 A family prays at a memorial in front of Robb Elementary School in Uvalde, TX, Saturday, May 28, 2022. The school was the site of a mass shooting in which 19 children and two teachers were murdered. Photo credit: © Jintak Han/ZUMA Press Wire

In other words, the proponents of this position believe the founders were heartless sadists who would have allowed the suffering of kids in order to ensure that a bunch of yokels could hoard guns that would be useless if a tyrannical government actually did come calling with tanks and cruise missiles***.

This seems like an odd stance to take for people who claim to revere the Founding Fathers.

On the other hand, you have people who aren’t complete idiots and want to do something about a problem that kills thousands of Americans every year.

So far, the tyranny of the minority has prevailed… which is pretty ironic when you think about it.

Fortunately, there is no need to argue about the intent of the Founding Fathers any longer because we have unearthed a sensational historic document that settles the debate once and for all.

What you see below is the fragment of a transcript of a meeting between James Madison, George Mason, Alexander Hamilton, and Thomas Jefferson. We were only able to discover a single page but, as it so happens, this is precisely the part of the conversation during which they discuss the Second Amendment and their thoughts on it.

Madison: So, we are agreed on a strict separation of church and state?

Mason: But what if there is a medical issue involving the health of a woman? Certainly then an antiquated text like the Bible should serve as a guide and take precedence over common sense and science. I jest, of course. That would be preposterous.

The others laugh heartily.

Mason: Fortunately, there will never be religious zealots on the Supreme Court, so nothing to worry about there.

Madison: Well, that brings us to the Second Amendment. I think we are also in agreement that the citizens should have the right to form militias and fight back against a tyrannical government.

Jefferson: A minor point, but, if the government were tyrannical, would it not just disregard that right?

Madison: Well, yes, but we rose up against a tyrannical government ourselves, so we need to put something in there about this.

Jefferson: How about adding something about the right to bear arms? That’s innocuous enough. Obviously, we want our frontiersmen to protect themselves from wild animals and noble savages. What could go wrong if we add this?

Mason: We could, but could this not be misconstrued in the future? What if, 200 years down the road, Americans bear much more powerful arms and use them to senselessly slaughter each other?

Madison: You mean in the fight against tyranny?

Mason: No, just because they can.

Madison: This does not seem plausible. However, I am sure that, using the framework of the Constitution, Congress would come up with sensible laws that would prevent such a thing. For example, and I am making this sound as outrageous as possible, these laws would then make it unlikely that a deranged young man would be able to walk into an elementary schoolhouse with many muskets and murder a score of children.

Jefferson: Well, obviously in that case, lawmakers would act. Only an idiot would sit by and do nothing if such an atrocity were committed… let alone one every week or so.

Madison: You are right. Clearly, any reasonable man who values life would support common sense approaches to preventing such carnage.

Mason: Not Aaron Burr. He loves guns. If you asked him, he would probably propose placing armed militia at the entrance of schools.

Hamilton: That guy is a jerk.

Madison: It’s settled then. Americans should generally be allowed to own guns, and we’ll leave it up to future generations to enact sensible restrictions to make sure they don’t randomly and senselessly kill innocents.

Well, there you have it. This exclusive transcript clearly shows that the Founding Fathers were not only in favor of gun ownership but also supported measures that would prevent Americans from abusing that right.

Now, we understand that it may sound far-fetched that we managed to recover this specific segment of a transcript. But, let’s be honest, is it really any more ridiculous than blaming these mass killings on unlocked doors or the absence of tripwires, suggesting that teachers should be armed to the teeth, or proposing whatever it is new GOP brainiac Herschel Walker is talking about?

*Note to wannabe gunmen: No, this is not the type of school you can shoot up to get on CNN while you die in a blaze of infamy.

**Note to Republicans: “Thought” is the action of using your brain instead of mindlessly regurgitating what you hear on Fox “News.”

***Americans aren’t allowed to own militarized tanks or cruise missiles, which means their right to bear arms is already sensibly restricted.