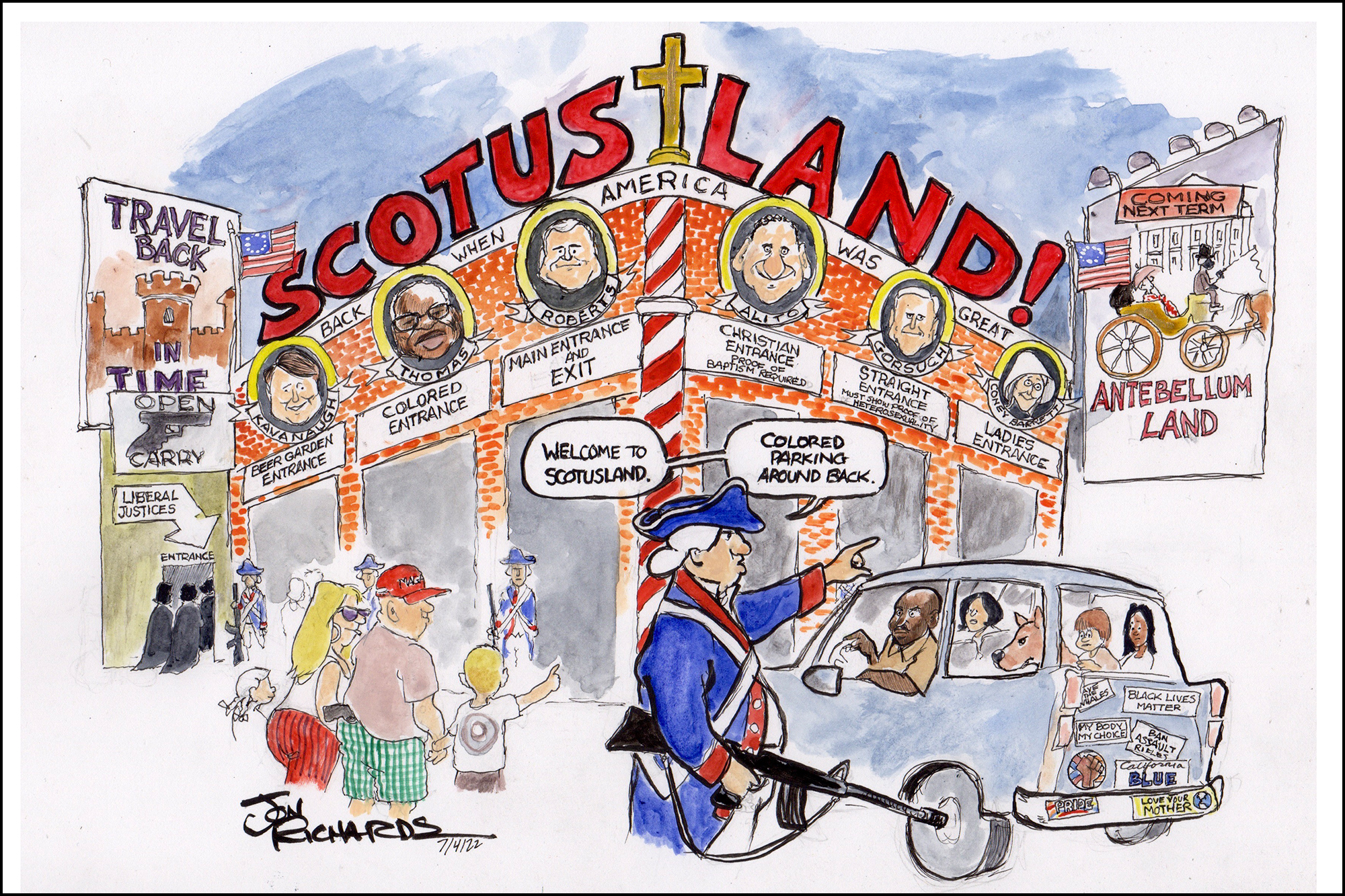 The Supreme Court Wants You to Party Like It’s 1776

Every Fourth of July, when wig-wearing and costume-clad Americans in parades are paying homage to the brave patriots who threw off the shackles of oppression and rejected the tyranny of one unelected ruler, many onlookers probably wonder what it was like to live in those days.

Thanks to a Supreme Court that seems hellbent on returning America to the dark ages, they may get the chance to find out for themselves. Well, obviously not the “throwing off the shackles of oppression” thing, of course. Those are back, too. But at least now Americans are living under the tyranny of six unelected justices instead of one monarch.

In the past couple of weeks, the high court’s ill-gotten right-wing majority has turned back the clock half a century to a time when women died during back-alley abortions, kids had to pray in school, corporations were allowed to pour battery acid or cyanide or whatever into the nation’s rivers and make the air unbreathable, and cops could beat suspects to a pulp without reading them their rights or fear of prosecution. OK, that last one never really changed in all those years, but, thanks to the court, police officers now can’t be sued for failing to give victims the Miranda warning. Because, obviously, cops need less accountability.

The only reason the Supreme Court didn’t do even more damage is that it ran out of cases the conservative justices could use to undemocratically transform America.

But just wait until the fall. The way we see it, Supreme Court terms are like dog years. However, while a dog year supposedly equals seven human years, one Supreme Court term reverses the hard-fought rights of an entire decade.

We have already reached the 1970s. Next up will be the Civil Rights and Voting Rights Acts (and maybe the justices will also end Medicare and Social Security… after all, that’s on the GOP’s wish list), and then the court will probably overturn Brown v. Board of Education in 2023 and we’ll be back in the segregated 1950s.

Come to think of it, maybe Clarence Thomas is doing all of this so he won’t have to share a bathroom in the Supreme Court building anymore. Or maybe he doesn’t really like Ginni after all and wants to get his interracial marriage annulled. You can’t really blame him. Who wants to be married to a traitor?

At this pace, by the end of the decade there won’t be any rights left to reverse, so enjoy your liberties while you still have them. Unless you are a straight, white, affluent male, of course. In that case, you should be OK… at least as long as you attend church every Sunday and don’t fall in love with a woman of color.

So, if you are not that type of American, buckle up, because it’s going to be a bumpy ride.

Granted, there will be some enclaves of sanity. Like the early colonists, those who can afford it can move to a place like California or New York. Of course, some of these rulings will also affect life there because corporations will embrace any regulatory rollback that the Supreme Court throws their way.

Speaking of those early colonists:

Nowadays, if you want your kids to experience what the US looked like in the olden days, you can visit Colonial Williamsburg.

In a few years, you can save the price of admission and just take your children to any red state. While they won’t see a costumed re-enactor churning butter there, you will be able to show them what life looks like without women’s rights, democracy, integrated schools, vaccines, accurate history lessons, books, and Black people who are allowed to vote.

In other words, it’ll be a right-wing utopia… and what Republicans are really talking about when they say they want to make America great again.

And, the longer a majority of the people, who say in poll after poll that they do not want these changes, sit idly by and allow them to happen, the more difficult it will be to get the country back on track.

By the way, there is one thing that will be very different in the new old-timey United States: This time around, the people and corporations who pay no taxes will have all the representation.