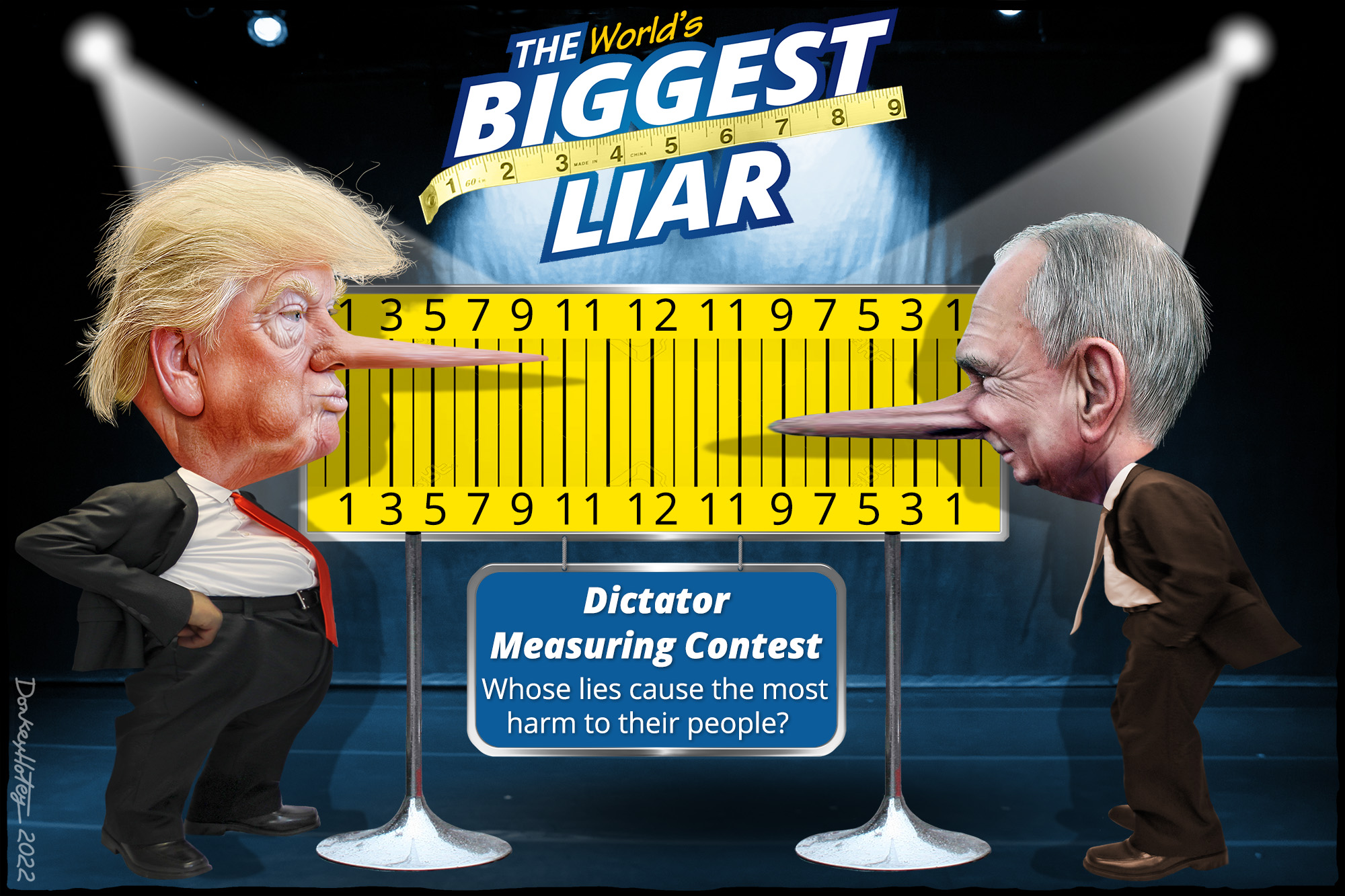 The Outliar: How Trump and MAGA Nation Broke the Truth

Great news: We won a Pullitzer Prize in the “Combined Cartoons and Editorials” category. It was our third.

This is a lie, of course, and a clumsy one at that. It’s spelled “Pulitzer,” there is no “Combined Cartoons and Editorials” category, and the winners are announced in May. In addition, it would be easy to check past Pulitzer Prize recipients.

That means anybody who can operate a search engine would be able to find out in seconds that we lied. And, rightfully, our credibility as journalists would have taken a hit once they found out it was all just made up. In fact, if we boldly lie about something like this, nobody should believe a word we write going forward.

At least that’s how things are supposed to work — especially at a time when much of the world’s accumulated knowledge is just a few keystrokes and mouse clicks away.

What Lies Need to Take Hold

There are different factors that determine how quickly and thoroughly a lie can be exposed: Access to information is one. Without the Internet, for example, our lie would be more difficult to expose.

Also, the bigger and bolder a lie, the easier it is to disprove. In our example, we should have just said that we were once again snubbed because the Pulitzer Prize Board held a grudge against us for some unspecified reason.

In that case, we might have gotten away with it because our lie didn’t really impact our readers. And that’s another factor. Usually, the more a lie personally affects people, the more inclined they are to search for the truth.

That means the liar also has to convince people that what they are personally experiencing is not true, and the more evidence to the contrary, the more difficult that becomes.

All of the above shows how Vladimir Putin is facing a monumental challenge: In the face of mounting evidence to the contrary, he has to lie to an entire country about the invasion of Ukraine and the motives behind it.

Right now, that is still working for two reasons: Putin controls the Russian media, and those who publicly reject his lies face severe punishment. In other words, there may be a lot of Russians who already know the truth about the war but are afraid to voice it.

Apart from that, perpetrating the lie is a real uphill battle. Anybody who still receives information from outside Russia — e.g., online or through family, friends, or business associates — will have ample reason to doubt the government’s version of events.

Even worse for Putin is the fact that it is becoming quite apparent that the reality in his country does not comport with the government’s version of events.

If Russia is the good guy, why are all the international stores closing? Why are there shortages of goods? Why are there Soviet Union-style lines? Why is banking more difficult or impossible?

Oh, and if the “special military operation” is going so well, why are thousands of young men not coming home?

All of these things will become increasingly difficult to explain for Putin as the war drags on, more troops die, and the sanctions have a greater impact on regular Russians.

It will be interesting to see how popular support for the war evolves in the coming weeks. Right now, about 70 percent of Russians say they back the invasion.

The King of Lies

Wait a minute… 70 percent? That rings a bell.

It so happens that it is roughly the percentage of Republicans who believe in former President Donald Trump’s Big Lie that the 2020 election was stolen from him.

But this is where the similarities end.

Because when it comes to lying, Trump is unique… an outliar, so to say.

First, there is the breathtaking barrage of lies he tells — more than 30,000 over the course of his presidency. Then there is the brazenness of these falsehoods. Trump will keep telling the same lies long after they have been disproven.

However, there is another — often neglected — aspect that puts Trump in a league of his own: an audience that is receptive to his lies. And that is putting it mildly. Time and again, it appears that his supporters would rather be lied to than face a reality they don’t like.

In order to get to 70 percent of support for his big lie of a just war to fight Nazis in Ukraine, Putin has to exercise tight controls over what information is available to Russians and threaten them with long prison sentences for uttering the truth in public (by the way, both Putin and Trump refer to the truth as “fake news,” so there is another similarity).

In other words, the Russian leader relies on censorship and coercion. Neither are tools that Trump needs. That’s because his supporters are self-censoring. Even though they could easily find out that their hero is a liar, they are going out of their way not to… multiple TV networks and social media sites exist solely to shield conservatives from reality and promote Trump’s lies.

It’s as though, in the face of incontrovertible evidence to the contrary, tens of millions of Republicans are sticking their fingers in their ears and yelling at the top of their lungs so they don’t have to hear a truth that doesn’t fit into their view of the world.

For Putin, lying to his people will be increasingly difficult in light of mounting evidence that contradicts what he says. Chances are that he will have to go to increasingly extreme measures to make sure Russians are toeing the line.

That’s not a problem Trump has. To his base, it doesn’t matter that there is not a shred of evidence supporting the Big Lie. It doesn’t matter that Trump lost lawsuit after lawsuit following the 2020 election. It does not matter that nobody — and especially not the former president himself — seems to be fighting this supposed injustice.

What matters is that Trump presented his followers with a convenient lie that is a lot more palatable than reality.

Trump’s Base — a Dictator’s Dream

Authoritarian countries like Russia and China would kill to have a population made up of GOP voters. You wouldn’t have to restrict their Internet access, threaten them with prison or worse, or censor unwanted sources of information. They are willfully blinding and muzzling themselves!

No need to take away their social media accounts, as Putin has. On the contrary. Trump supporters are using the Internet to eagerly spread pro-Trump disinformation.

In dictatorships, the truth is not permitted. In today’s GOP, it is not wanted.

Or, to put it differently, in a dictatorship, people have an excuse for not knowing or speaking the truth.