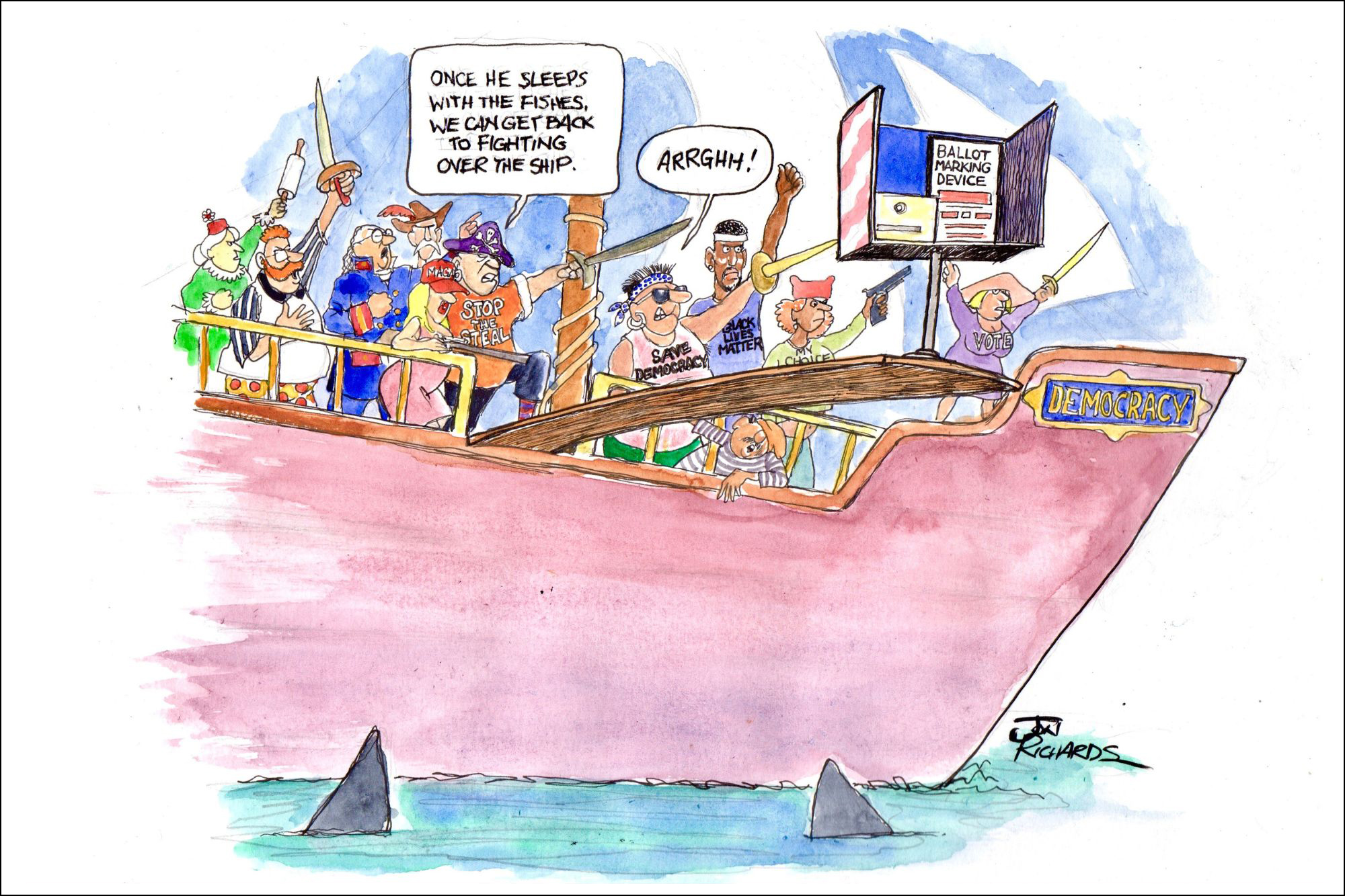 Rage Against the Machines — Can an Unlikely Coalition Make Elections Safer?

Say what you want about hardcore MAGA and QAnon types, they are highly motivated. When it comes to stopping imaginary pedophile rings, getting educational concepts banned from schools where they weren’t taught in the first place, supporting a made-up wall to keep out fake floods of foreigners, or protecting themselves from Bill Gates personally implanting microchips into their bodies, they have some very strong opinions and are willing to fight for them.

Usually, this results in books getting banned, death threats being issued, FBI offices or pizza restaurants being attacked, and Capitols being overrun.

However, there is an area in which this rabid activism could actually do some good: voting machines… or, to be more precise, getting rid of them.

Because here, the views of well-meaning experts and conspiracy theory-touting lunatics align.

You don’t believe us? Let’s put this statement to the test.

“The best and smartest way to conduct voting [is] paper ballots.”

“Cybersecurity experts agree that voting machines should not be connected to the internet at any time, in any way, shape or form.”

“Ballot-Marking Devices Cannot Assure the Will of the People.”

“You’ve heard a lot over the past few days about the security of our electronic voting machines. This is a real and serious issue, no matter who raises it or who tries to dismiss it out of hand as a conspiracy theory. Electronic voting is not as secure as traditional hand counting. It never will be as secure. Voters can see this, because it’s obvious, and it makes them nervous. And why wouldn’t it make them nervous?”

“The inherent risks of using paperless machines have been known since at least 2003. Why are they still in use? That’s a great question.”

“We’re up against some really entrenched, powerful interests, who have really just figured out a way to be above the law. There is no other way to characterize it.”

Election integrity activists should harness this Stop the Steal anger and use it to pass much-needed reforms. Because, as we have seen time and again, if Trump and Fox News lead the way, traditional Republicans will fall in line and support just about anything the base wants.

Of course, apart from their distrust of the security of voting machines, the two groups don’t have a lot in common. The concerns of lawmakers like Wyden and experts like Stark and Appel are well founded and based on evidence. The vulnerabilities they have identified are a true threat to democracy, and they have spent years trying to fix these problems.

The Trump cabal, on the other hand, is new to this issue and primarily motivated by finding anything that would cast doubt on Joe Biden’s victory. Many of their accusations border on lunacy, and none has been proven to be true. However, and this is the key, while traditional Republicans have stood in the way of meaningful election reforms at every turn, the rabid right would burn every voting machine they could get their hands on if told to do so.

And that’s a real opportunity for meaningful change.

Election integrity activists should harness this Stop the Steal anger and use it to pass much-needed reforms. Because, as we have seen time and again, if Trump and Fox News lead the way, traditional Republicans will fall in line and support just about anything the base wants.

And these lawmakers may not even be needed. Just imagine what would happen if ballot initiatives banning these machines were up for a vote in as many states as possible!

It seems as though a coalition of these unlikely bedfellows would be enough to carry the day.

Of course, you’d need different strategies to convince them to back such a measure. The appeal to Democrats is easy. Just tell them that this is a way to save and strengthen democracy, which has become a major issue since 2020.

Getting Trump supporters on board would be a bit trickier since they don’t really care about democracy. In that case, the strategy would be to buy ads on Fox and talk radio that say: “Dominion stole the election from Donald Trump. Now it’s time to strike back. Vote yes on Prop 1609 to put Dominion out of business.”

The same tactic could be used to shame Republican lawmakers into supporting election reform bills. Just imagine running ads in South Carolina with lots of flags and eagles and the voiceover, “Lindsey Graham says he supports Donald Trump, but he won’t get rid of the voting machines that cost our president the 2020 election. Whose side is he really on?”

But time is of the essence.

Because while the rest of MAGA nation is (rightly) embracing the “voting machines are bad” narrative, some of the more ambitious Trump supporters seem to have more insidious plans.

Reports of them either trying to break into voting machines or succeeding and then passing on the information to others are on the rise. There have already been cases in Michigan (involving the Trump-endorsed candidate for attorney general); Georgia (involving lawyers trying to overturn the election on Trump’s behalf); and Colorado (involving a Trump supporter who ran for secretary of state).

The most benign explanation is that they wanted to do their part to “Stop the Steal” by gathering evidence supporting Trump’s baseless claims. However, by disseminating this information, they are making things easy for industrious hackers — for example, those from Россия who helped Trump win in 2016 — to get involved in a more direct manner. But that’s the most charitable interpretation of these crimes.

A more sinister explanation is that they are not trying to stop an imaginary steal but rather are planning their own, very real election heist this time around.

That’s why the time to act is now. Ultimately, it does not matter what people’s motivation is to end the US’s reliance on vulnerable voting machines.

Who knows? If this works, maybe we can convince MAGA nation that George Soros and other “globalists” are using gerrymandering to take their guns away and groom their children. Then we can get rid of that as well, and the US can start to resemble a democracy again.