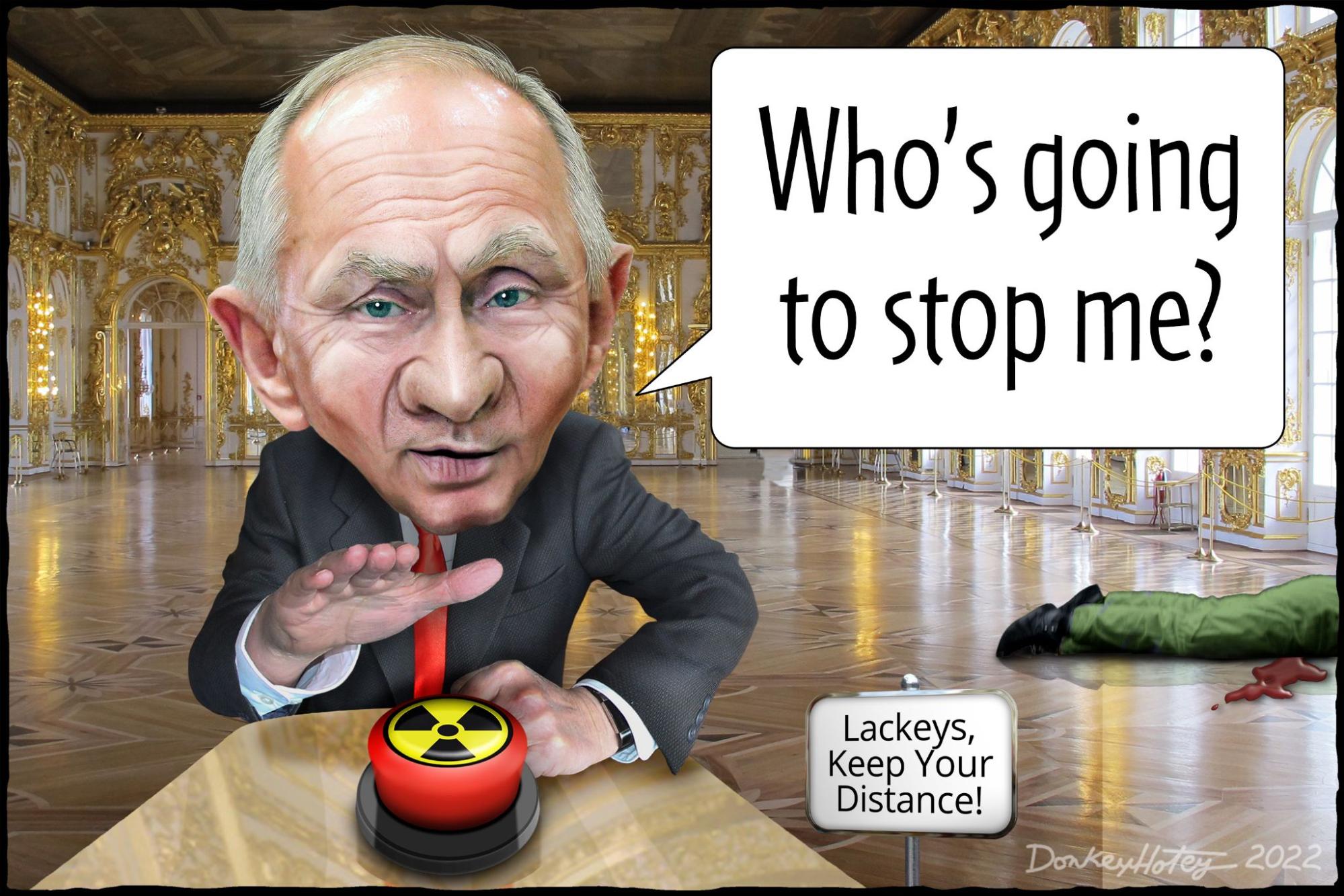 Putin and His Nukes: Will He Go Ballistic on Ukraine?

It’s been less than three weeks since Russia invaded Ukraine, and things couldn’t be going better… well, unless you are one of the 44 million Ukrainians whose country is getting shelled. But let’s forget them for a moment (as the world will in a few weeks).

On the face of it, Russia’s performance justifies the giddiness of military experts (both real and on Twitter).

Not much has gone as planned for the former superpower. The wheels have quickly come off the invading force (quite literally) and stalled its progress. As a result, the truckers who headed for DC to protest nonexistent federal mask mandates were (improbably) only the world’s second-most pathetic convoy this week.

And, instead of greeting the Russians as liberators, Ukrainians are preparing to throw them the world’s largest Molotov cocktail party.

Not a day goes by where there isn’t a new example of plucky Ukrainians sticking it to their invaders in some grimly hilarious (and easily shareable) manner.

Even old babushkas are getting in on the fun of humiliating Vladimir Putin’s army. One Ukrainian grandma downed a drone with pickled tomatoes.

In other words, if you are following the war online and want to feel good about it, then social media has you covered.

As badly as things are going at the front, they’re almost worse back home in Mother Russia. A mix of sanctions and ham-handed efforts to keep the population clueless about what’s happening in the “special operation” is drastically changing life for all Russians… and not for the better.

For these reasons, and many more, it is understandable that hobby war enthusiasts are feeling optimistic.

However, there is one thing these couch combatants are conveniently overlooking: Less than three weeks into the war, there is (almost) no scenario in which this ends well. And “well,” in this regard, means “without millions of people having to suffer for years.”

Of course, in a way, that is true for every war. Once the shooting starts, there is always going to be death and destruction, traumatized children, refugees, and resentment that will last for generations. And the longer the fighting lasts, the greater these consequences.

But this war features a mix of ingredients that makes the potential for lasting disaster much greater. First of all, while Russia’s days as a superpower have been over for some time, it still has the firepower of one. Sure, maybe its tanks are falling apart and its drones are vulnerable to pickle attacks, but it still has thousands of nuclear weapons. But, you may ask, is Putin crazy enough to use them? We’ll get to that in a moment.

Another factor is the size of the countries involved. They are massive. More than 5 percent of Ukraine’s population has already fled the country… and not in the direction of the “liberators.” That’s more than 2.5 million people at the time of the writing of this article, and the number of unwilling exiles will be closer to three million by the time you read this.

There are also millions of Russians who will suffer because of Putin’s desire to get the Soviet/czarist band back together — from the conscripts who are doing the dying to the soon-to-be-starving masses who don’t understand what is happening. Because they are getting their information from Гoх лэщз, as far as they know, heroic Russians are trying to defeat the Nazis. That’s why it must be incomprehensible to them why they can no longer buy cheeseburgers, lingerie, or MULLFJÄLLET conference chairs anymore.

Editor’s Note: Yes, we know that’s not how Fox News is spelled in Russian, but it better illustrates the point of propaganda outlets being able to brainwash millions. In addition, thanks to Tucker Carlson’s cheerleading for Putin, Russians really are getting their “news” from Fox.

It doesn’t help that Putin is accountable to no one. At least when American presidents want to invade another country under false pretenses in hopes of being greeted as liberators, the voters get a say in it eventually. In this case, however, it’s fair to say that Putin does not give a shit about anybody — not the young Russians he’s sending to their deaths, not his subjects, and certainly not the Ukrainians he’s supposedly “helping.”

The biggest problem, however, is that three weeks into the conflict, it’s crystal clear that Putin started a war that he can neither win nor afford to lose.

To sum up this dilemma, tens of millions of people (so far) are at the mercy of a sociopath, answerable to no one, who has access to the world’s largest nuclear arsenal and is mired in a no-win scenario.

It doesn’t matter how heroic the Ukrainians are — from their president to the tomato-throwing grandma and everyone in between — this is a problem they cannot solve on the battlefield. If anything, they are making it worse, because Putin abhors weakness and the Ukrainians are exposing his own to the world.

That’s why he won’t back down, no matter how much his army is getting decimated. Fear is Putin’s currency, not the ruble.

He can’t just call off the invasion and say: “Just kidding, you guys. Can my buddies please get their yachts back?”

In essence, Putin is a bully who is getting slapped around the schoolyard by smaller kids right now. If he ever wants to take anybody’s lunch money again, he has to come back with a new level of brutality.

We’re already seeing this with indiscriminate attacks on civilian targets. But that won’t be enough, because the Ukrainians now believe in their own strength. They know they can win this thing. It’ll be a victory at a very high cost, but that’s better than losing their country.

You know who also knows that the Ukrainians can win? Putin.

In fact, it seems somewhat improbable that Russia can prevail in a conventional war… and downright implausible that it could ever succeed in holding onto any seized territories as an occupier — especially in light of the brutal strategies its military is already employing.

Which is why, merely three weeks in, just about every scenario of how this ends is really, really bad.

Nobody is saying this yet, but, like the bully who ends up shooting up their school, it seems more likely that Putin will leave total carnage in his wake than anything else — and that includes using a nuclear weapon to force Ukraine into submission and make everybody afraid of him again.

If that seems like a stretch, keep in mind that Western governments have spent this week issuing warnings that Putin may use chemical and/or biological weapons. In the past, especially after annexing Crimea, the Russian president had mused about his country’s nuclear weapons and indicated a willingness to use them. In addition, he has already put Russia’s nuclear deterrence forces on high alert.

This kind of posturing used to be enough. Now, however, with his military proving to be so inept, Putin may come to the conclusion that it will take more than threats to be feared abroad.

Furthermore, he has already turned his country into an international pariah and plunged it into an economic crisis, so what more could the West do to him?

Finally, and perhaps most importantly, Putin’s own neck is literally on the line. Therefore, he may resort to desperate measures to save it, and soon, since he doesn’t have the luxury of waiting 2 1/2 years to throw another election Donald Trump’s way.

And that brings us to the only “good” scenario left: Before things get completely out of hand and Putin uses a weapon of mass destruction, somebody in Russia has to take matters into their own hands.

That is really the only way in which this situation can be deescalated and a lot of needless suffering prevented.

Ideally, this would happen through a public uprising that brings about a true regime change and puts Russia on a path toward becoming a more cooperative member of the global community. However, in light of the brutal crackdown on protests, this seems unlikely. Realistically, a group of oligarchs and/or the military will have to stage a coup, get rid of Putin, end the war, and hope all of that garners enough goodwill to lift the sanctions and allow them to return Russia back to normal —  i.e., a malevolent kleptocracy.