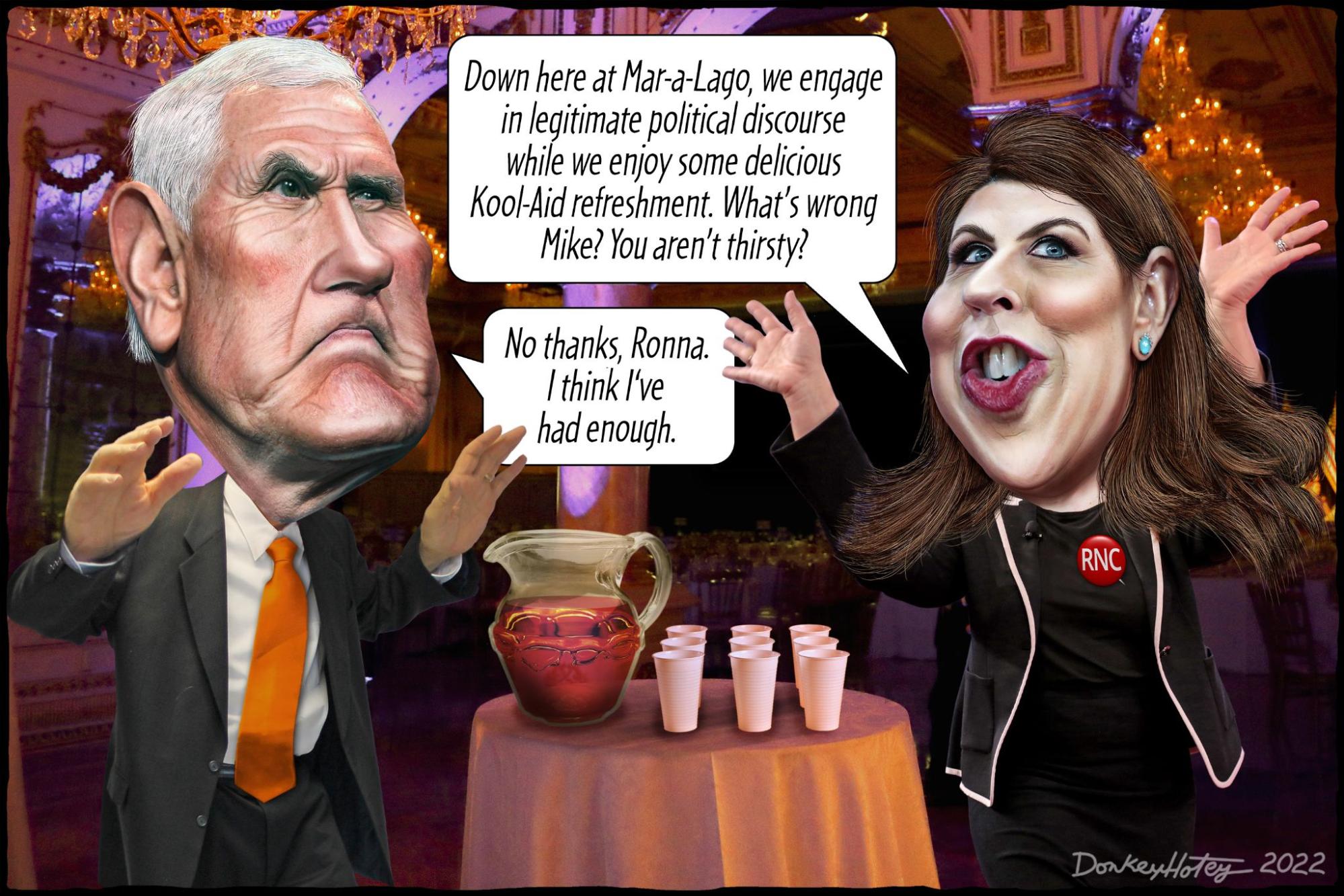 While Trumpism is essentially a cult, it is also a lot like an abusive relationship for the people in former President Donald Trump’s orbit: Stepping out of line invites further abuse, you have to cover for the abuser, and it involves a lot of lying to yourself that things aren’t so bad.

That is why former Vice President Mike Pence deserves at least some praise for defying his former boss earlier this month by correctly pointing out that the Constitution did not afford him the right to overturn the 2020 election.

Instead, he got a fair share of flak from the left — in part because it took him so long to say something, and in part because his remarks did not go far enough in criticizing Trump for wanting to stage a coup.

However, there are at least three reasons why Pence should be commended and not condemned: First, taking even a small step out of an abusive relationship or a cult must be incredibly difficult. This is an accomplishment that should not be diminished.

Furthermore, alienating Pence is a mistake because, like the spouse of an abusive husband, the vice president has the goods on his former boss. If he ever were to reveal all he knows, he could, at the cost of his future political ambitions, probably put away Trump for good.

The former president is definitely aware of this. That is the only explanation for why Trump’s response to Pence was fairly mild (at least by the standards of an unhinged lunatic).

Most importantly, every former supporter who escapes Trump’s orbit matters — because stopping Trumpism is a very tall order. Every day, we learn new details of Trump’s lawlessness and of how he sought to destroy American democracy. And every day, there is more evidence of how Trump’s lies — especially the Big Lie — have burrowed their way into the minds of his supporters… and into Republican politics.

We saw that again just this week, when the Republican National Committee (RNC) voted to censure Reps. Liz Cheney (R-WY) and Adam Kinzinger (R-IL), the only two GOP lawmakers who have shown any real interest in holding Trump to account. Even worse, in doing so, the RNC defended the attackers of the Capitol.

With everything the United States is supposed to stand for at stake, it is going to take a large coalition — both of the willing and the reluctant — to rid the country of this cancer, and there is a good chance that his own party will have to do it. This not only includes the people who were anti-Trump from the beginning, but also former aides who end up siding with the Constitution and the rule of law, and will therefore testify before the January 6 committee instead of pleading the Fifth.

In other words, any kind of discord in the MAGAverse is good; this is no time for the purity tests that have become a hallmark of the political left.

And Pence’s remarks have certainly shaken up things by forcing people to choose sides. Earlier this week, Alyssa Farah Griffin, a former member of Trump’s communications team, got into a Twitter tiff with Pence’s former national security adviser, retired Lt. Gen. Keith Kellogg. The former stood by Pence while the latter sided with Trump.

This reflects the current dynamic within the Republican Party. On the one hand, you have the True Trumpers. These are people like Reps. Jim Jordan (R-OH), Matt Gaetz (R-FL), Lauren Boebert (R-CO), and Marjorie Taylor Greene (R-GAzpacho). And, probably, the majority of the Republican base. If they leave Trump, it will be only to go even further off the rails.

On the other hand, you have the political opportunists. This group includes people like Pence or Senate Minority Leader Mitch McConnell (R-KY). They were riding Trump’s coattails because that got them power and allowed them to pursue their own goals. Privately, however, many of them despise Trump; if they could do it without losing the millions of new voters the former president attracted with his white nationalist rhetoric and policies, they would get rid of him in a heartbeat.

That’s precisely what happened in this case… thanks in large part to the Trump-friendly media that (once again) convinced the GOP base that war is peace, freedom is slavery, ignorance is strength, and insurrection is “legitimate political discourse.”

They couldn’t do it while Trump was in office because then he held all the power and had at his disposal the world’s biggest megaphone — i.e., the means to put down any dissent.

The first real opportunity they had to get rid of him was after the 2020 election. Trump headlined a resounding defeat that cost Republicans control of the White House and the Senate. That could have been the time to declare that the party needed a new leader. However, after Trump invented the Big Lie, the political opportunists had to fall in line because the base wanted to believe it.

Then came January 6. This time, for all to see, Trump inspired a violent attack on Congress with his lies, and his MAGA mob even targeted Pence and some of the other opportunists. That really was the moment when they should have realized that Trump would never go away and that this madness would not stop. Most importantly, it was the best opportunity to put an end to it.

Unfortunately, they didn’t act quickly and decisively enough. Most likely, they felt that the events of January 6 were so bad that Trump had ended his own political career. This, of course, has always been their preferred scenario, because then these establishment Republicans wouldn’t alienate the millions of voters that are loyal only to the former president.

However, just like Hillary Clinton did after Trump admitted to sexually assaulting women on tape, the opportunists learned a hard lesson: The former president may be good at recovering from financial ruin, but he is even better at bouncing back from moral bankruptcy.

It should be clear to anyone by now that Trump will never just disappear or implode. He told us as much six years ago when he said that he could shoot somebody on 5th Avenue and not lose voters.

That’s precisely what happened in this case… thanks in large part to the Trump-friendly media that (once again) convinced the GOP base that war is peace, freedom is slavery, ignorance is strength, and insurrection is “legitimate political discourse.”

Maybe Pence has finally realized that his master will not go quietly by himself. Somebody has to do the deed. That’s certainly how McConnell feels, which is probably why he has become the primary target of Trump’s scorn.

You can say what you want about the Senate minority leader, but he seems most determined to wrest control of the GOP away from the former president.

He certainly didn’t mince words this week when he said January 6 “was a violent insurrection for the purpose of trying to prevent the peaceful transfer of power after a legitimately certified election from one administration to the next.”

And Sen. Mitt Romney (R-UT) chimed in on reports that Trump had taken classified documents to Mar-a-Lago. “Clearly, if classified documents were taken, that would be of grave concern and it’s appropriate to follow the law,” Romney said. “Frankly, President Trump’s misbehavior consists of a long list and you just add that to the total.”

Taken together with Pence’s rebuke of Trump, maybe this is the week that senior Republicans finally realized that they need to put on their big boy pants and confront the former president head-on.