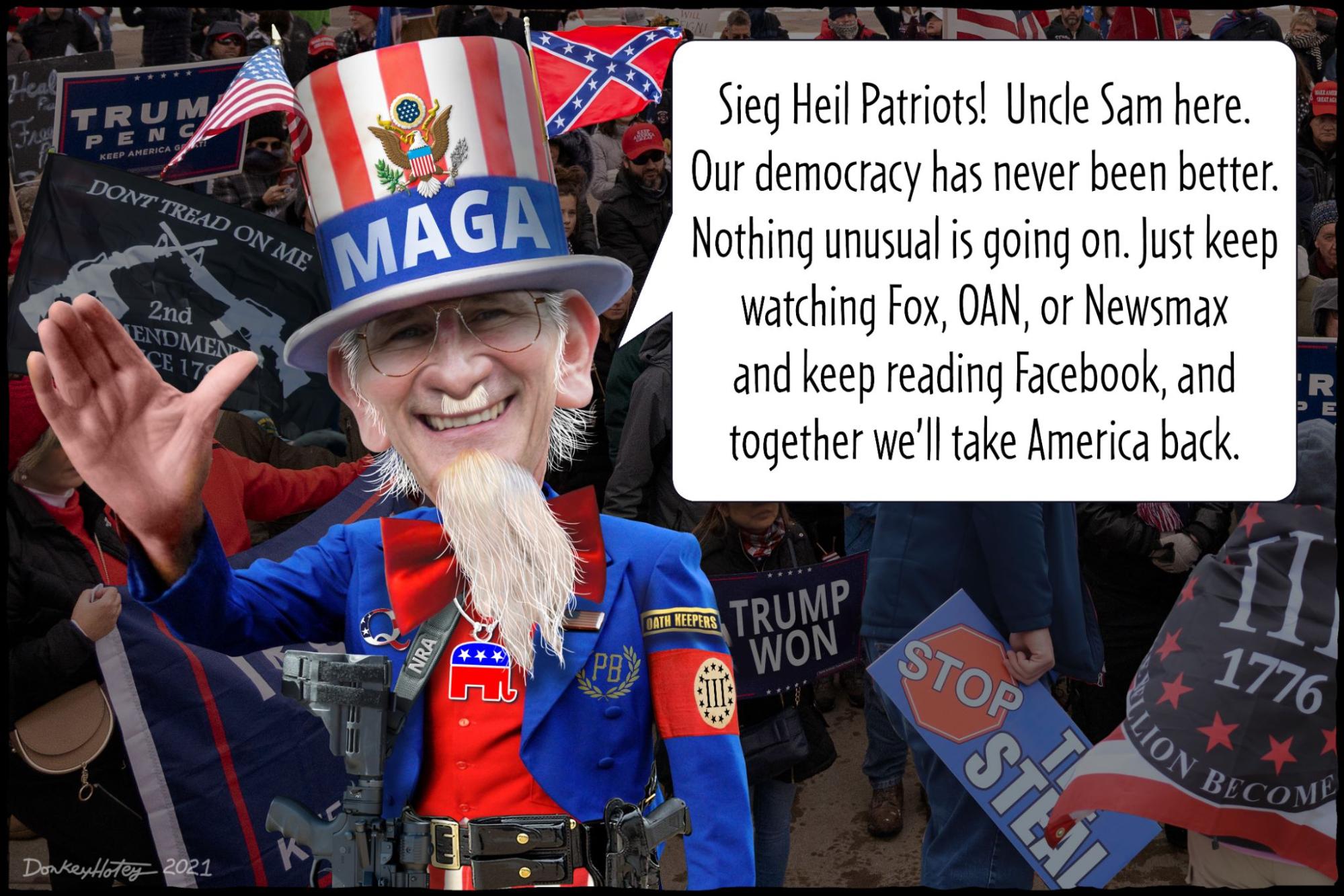 It’s Time to Wage a War on Right-Wing Terror

Usually, when Americans remember a date (other than holidays like Christmas or Halloween), it’s because it will live in infamy. That is why even the least historically literate of us know about December 7, September 11, and now January 6. In each case, the United States was attacked.

It’s fair to say that the threat from Japan was effectively dealt with after a few years, tens of thousands of US casualties, an outlay of a few trillion dollars (adjusted for inflation), and two nuclear bombs dropped.

The response to September 11 is still a work in progress. The reverberations have already lasted longer — from the Global War on Terror (GWOT) to the curtailment of civil liberties spawned by the ever-expanding surveillance state — than World War II. On the other hand, the GWOT has resulted in far fewer US casualties, and no nuclear bombs have been dropped (although former President Donald Trump seemed to entertain the idea).

In comparison, the reaction to last year’s assault on Congress (and democracy) has been rather meek.

One of the reasons might be that there is no consensus on what even happened. While Americans are generally in agreement about what Pearl Harbor and 9/11 signified, they are split on what January 6 was all about, with opinions ranging from “failed coup” to “tourist visit.”

In fact, this issue is so divisive that the same person can hold two completely contradictory positions in the span of a couple of days.

That is why we would exhort the various domestic law enforcement agencies, which have already identified far-right extremists as the greatest domestic terrorism threat, to act more decisively.

While hundreds of January 6 insurrectionists have gone to jail, most have gotten very lenient sentences, and the Department of Justice seems reluctant to pursue the higher-ups that were responsible for the violence.

January 6 is just one piece of this growing problem. There have been dozens of far-right, anti-government, and/or white nationalist attacks in recent years — many of which have cost lives and most of which have largely escaped public notice.

What is truly baffling is that a lot of this happens out in the open… and it’s not just a handful of extremists who want to use violence as a means of achieving their goals.

According to a recent poll, a whopping 30 percent of Republicans agree with the statement: “Because things have gotten so far off track, true American patriots may have to resort to violence in order to save our country.” That number goes up to almost 40 percent of Republicans who bought Trump’s lies about Democrats “stealing” the election.

Which begs the question: Why isn’t this more of a priority? There is clearly a tremendous potential for violence in today’s GOP that is being systematically stoked by conservative politicians and news outlets.

A cynical interpretation would be that the views of far-right extremists align with those of many cops and other law enforcement officials. White supremacists have a long history of aligning with the police and infiltrating its ranks, as this FBI memo shows.

A more charitable explanation is that it is difficult to pick out the real threats among these millions of Americans. After all, it’s one thing to answer a survey and another to turn to violence.

In addition, they look like “regular Americans.” It is certainly easier to identify “others,” such as the tens of thousands of Japanese Americans who were put in camps during World War II or the many Muslims who have been profiled after 9/11. And, in all fairness, many of the January 6 insurrectionists looked as though they were on the way to an insurance industry convention or a country music festival.

If that is the issue, then we can help. Below, you will find a handy guide on how to find potential right-wing terrorists and their sympathizers. Fortunately, they are providing us with lots of data to make this fairly easy. For example, while the Muslim terrorists who have operated on US soil (like the 9/11 hijackers) generally communicated only through obscure websites, couriers, and other means that are difficult to trace, their domestic counterparts seem happy, even eager, to advertise their opinions on social media.

It also helps that the right has successfully hijacked American iconography and terminology. For example, “patriot” now seems to mean “right-wing lunatic.”

And, finally, the “War on Terror” — and the resulting erosion of civil liberties (in combination with new online spying tools) — also provides us with additional information that we can use for this guide.

Obviously, some might say that this type of scrutiny would constitute profiling. That may be so; however, Republicans love profiling (at least when those to be profiled are darker than white).

Just listen to the big guy himself.

“Our local police — they know who a lot of these people are. They are afraid to do anything about it because they don’t want to be accused of profiling,” Trump told Fox News a few years ago. “Do we really have a choice? We’re trying to be so politically correct in our country, and this is only going to get worse.”

This is a rare case of agreement with the former president for us. So, let’s profile his most hardcore supporters and without being squeamish about it since they have clearly demonstrated a willingness to engage in (or condone) acts of domestic terrorism.

Here is how it works: We have compiled a list of potential red flags and assigned each of them a value. If an individual exceeds a certain score, then they might just be willing to pick up a confederate flag and storm the Capitol.

This isn’t just for the FBI. Anybody can play along to see how people in their lives would score and whether our assessment is accurate.

In other words, if you come across the Twitter account “FreedomPatriot1776” and they describe themselves as “MAGA through and through. Trump won, #StopTheSteal,” assign them five points.

Acts of terror require weapons. That’s a problem in this case because so many Americans, especially conservatives, own lots of them. But there is a big difference between responsible gun owners and gun-toting maniacs. Still, people who have access to a gun are obviously much more likely to use it. Therefore:

Once you add up all the points, compare the score with the following list, which is based on the old, color-coded Department of Homeland Security terrorist threat list.

Congratulations; these people are very likely no threat to the United States. Maybe they are simply fans of the New England Patriots or gun enthusiasts, which is their constitutionally protected right. Or they simply like the comforting propaganda Fox News offers them.

People in this category enjoy misinformation too much and they probably disseminate it through social media. The good news is that they are likely armchair warriors who will talk a big game on Facebook but are otherwise relatively harmless. They pose the biggest threat to others because they refuse to get vaccinated for some fantastical reason.

Now we are getting into more dangerous territory. These folks live in a reality created for them by Trump and propaganda outlets to the right of Fox. As a result, they are in a constant state of outrage at the many injustices they are the victims of. People in this category are superspreaders of misinformation and will show up at school board meetings to complain about critical race theory. These folks may only be one conspiracy theory away from wanting to take more direct action to right the many perceived wrongs in their lives.

Here we are talking about people with a very tenuous grip on reality. They have embraced Trump’s lies and are investing time and money in their activism — whether that means incessantly following the right-wing propaganda machine or traveling to rallies. They are looking to actively get involved in “fighting for their country.” This is the category to which most of the nonviolent January 6 insurrectionists belong. However, these people could turn into terrorists in an instant, for example because they are bringing assault weapons to protests (see Rittenhouse, Kyle). This is a group of individuals that law enforcement should monitor very closely. What is especially troubling is that we are talking about millions of people here. If they were Muslims, they would be on the no-fly list.

These are the people who dream of taking up arms to overthrow a “tyrannical” government. They organize in “militias” and are heavily armed. This group includes lots of white nationalists who feel called upon to defend what they refer to as “Judeo-Christian” values and prevent the “displacement” of white people.

Make no mistake about it, these are terrorists or at least terrorist sympathizers — whether that’s in word, deed, or ideology. If they were Muslims and based in the Middle East, they would be closely monitored by US intelligence and could be the target of drone strikes.

Since they are white and live in the US, however, they will often be ignored… until it is too late and we’ll have another sad date to remember.