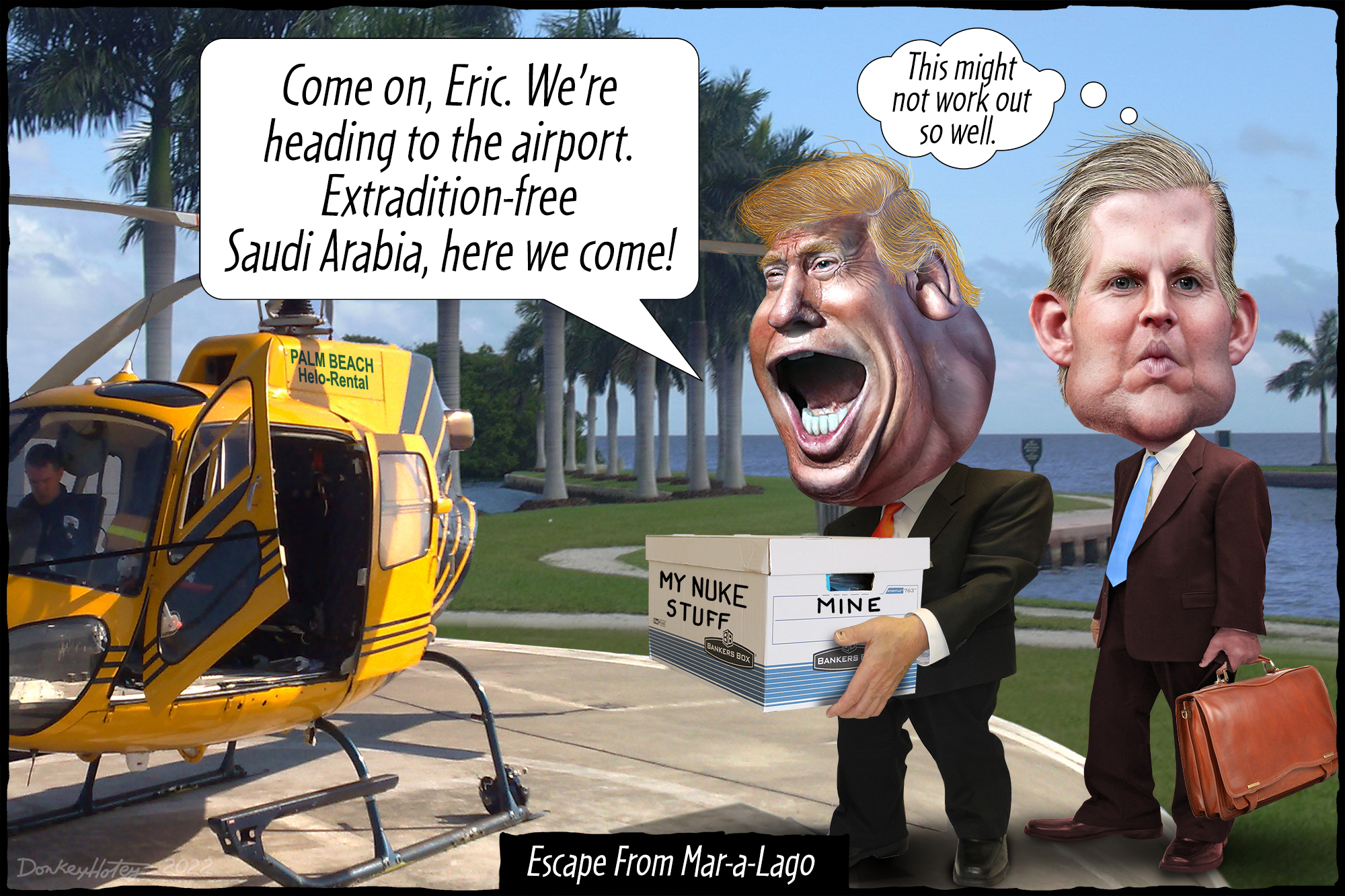 Donald Trump believes he can get away with anything. Photo credit: DonkeyHotey / WhoWhatWhy (CC BY-SA 2.0) See complete attribution below.
Cartoon Opinion

If you have been following the life and crimes of former president and coup initiator Donald Trump — and, regrettably, we were forced to — then it should come as no surprise that he stole classified materials and kept them in broom closets and display cases at his Mar-a-Lago resort.

Honestly, it would have been more surprising if he hadn’t.

Trump probably also tried to take a couple of tanks, a printing press for $100 bills from the US Bureau of Engraving and Printing, and the Jefferson Memorial.

The real mystery that remains is why he stole them. Knowing Trump, the reason is either incredibly stupid or involves some sort of grift. Possibly both.

With The Washington Post’s revelation that one of these documents involved information on “a foreign government’s military defenses, including its nuclear capabilities,” answering that question becomes a bit more urgent.

While it’s impossible to divine what’s going on in the head of a malignant narcissist, we still compiled a list of possibilities, to wit:

This is our favorite explanation by far. How great would it be if Trump, whom former Prime Minister Benjamin Netanyahu hailed as the best friend Israel has ever had, sold the country’s nuclear secrets to Saudi Arabia — maybe in exchange for the rights to host a golf tournament or a $2 billion investment in his son-in-law’s private equity firm?

PM Netanyahu: "Mr. President, over the years, Israel has been blessed to have many friends who sat in the Oval Office, but Israel has never had a better friend than you. You show this time and again." 🇮🇱🇺🇸 pic.twitter.com/2u41r3Fhgq

Incidentally, if you want to put an end to the MAGA menace, this would be the way. All that is needed now is an intercepted email to Khalid bin Ali al-Humaidan, the head of the Saudi General Intelligence Presidency, from the Saudi agent who took possession of the document, reporting: “I got the documents from Trump. Wire him the money. Israel has more nukes than we thought.”

Let’s be honest, this is the most likely explanation. Trump has always had a weak spot for Vladimir Putin and his regime, although it is not fully clear why. Maybe it’s because of Kompromat (compromising material), Putin’s help in getting him elected, a general admiration for dictators, Russian money that propped up his businesses, or another reason that is yet unknown.

In any case, Trump has maintained a relationship with Putin that was as secretive as it was deferential. And this wouldn’t be the first time that he revealed classified information to Russia.

What makes this scenario so plausible is that Trump is a moron who loves to brag. It’s easy to see him boasting about having possession of this information — either to Putin himself or one of the Russian agents who have undoubtedly flocked to Mar-a-Lago.

And, since Trump is so dumb, it would be easy to convince him to hand over this document because, after all, it “only describes information that Russia already has,” i.e., about its own defensive and nuclear capabilities. What Trump wouldn’t realize or care about is that this intelligence assessment would give Russia crucial information about US sources and methods —  information that could lead to the death of US undercover agents.

The North Korean leader is another dictator with whom Trump has enjoyed a warm relationship. Reportedly, some of the documents the former president stole and then returned were the “love letters” he received from Kim.

Maybe he was trying to get him something for his birthday — like an assessment of North Korea’s nuclear weapons capabilities and its national defenses. This would show the regime how much the US knows and could also reveal sources and methods as well as jeopardize intelligence assets.

On the day Saudi-backed terrorists leveled the World Trade Center, Trump noted in an interview that he now owned the tallest building in New York City.

It was classic Trump: He made the day of one of the greatest tragedies in US history about himself with a statement that was false.

So, what do you give a country that already has everything Trump admires: wealth, an authoritarian government, and zero accountability? How about information on the nuclear capabilities of an adversary?

Trump has often fantasized about being a Nobel laureate. However, it seems unlikely that he will get the Nobel Peace Prize — especially not if he is selling US secrets at Mar-a-Lago. We also know that, among the many false beliefs Trump holds, he is convinced that he is a genius.

In addition, he has some odd views on hurricanes. For one, he seems to think that their path can be altered by Sharpies and that they can be stopped by nukes.

You put all of these things together, and maybe Trump was trying to win a Nobel Prize in hurricane prevention.

That would be the most benign explanation… so maybe we’ll start hearing Republican lawmakers use that excuse soon on Fox “News.”