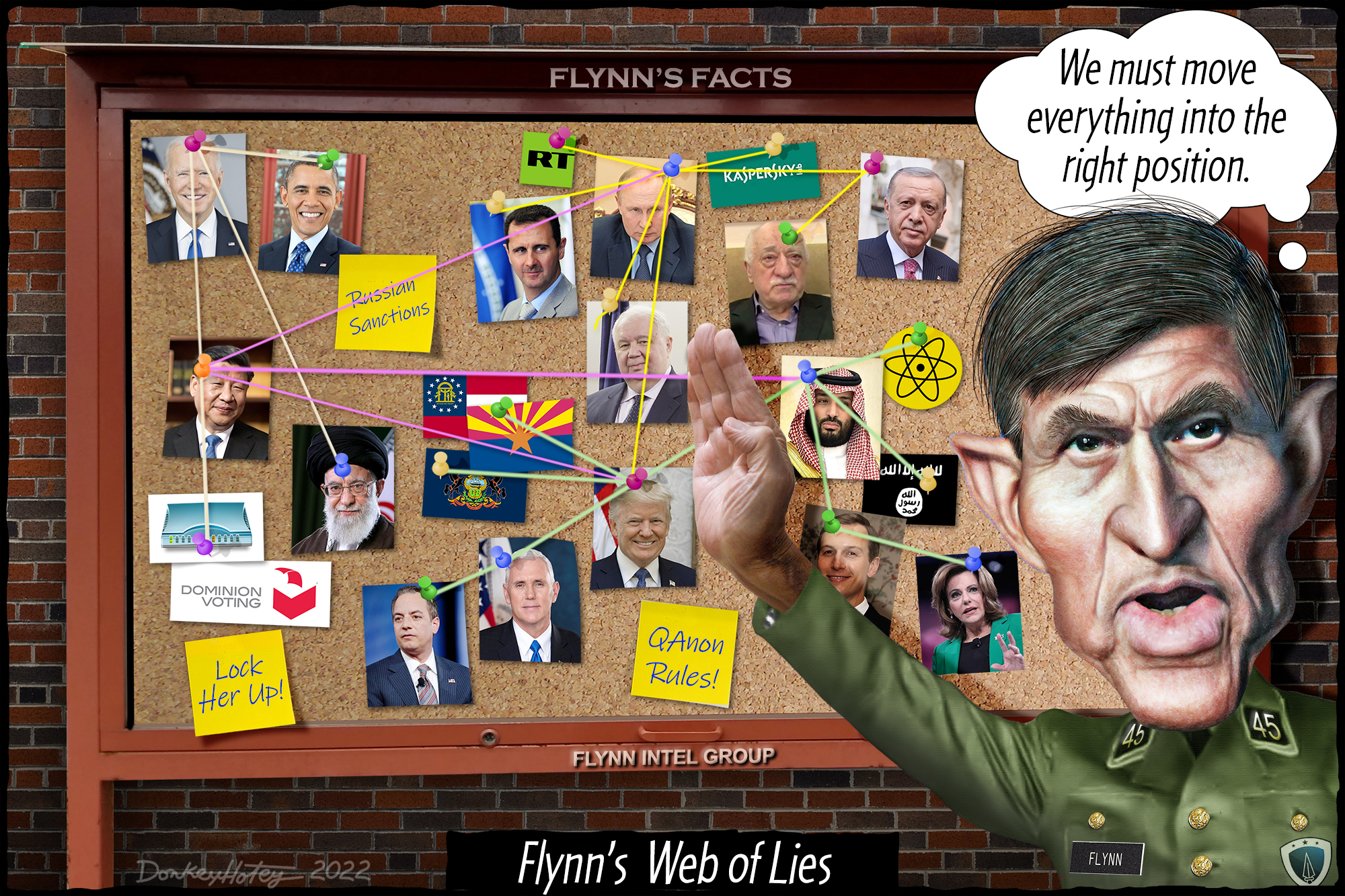 Grooming a Traitor: How Was Michael Flynn Allowed to Become a General?

Just about every major publication in the US has profiled Michael Flynn at least once — including several in recent months (you can find a selection here from The New York Times, The Washington Post, The Atlantic, The New Yorker, Politico, The Christian Science Monitor, and the Los Angeles Times). That’s not surprising because he is a compelling figure. After all, once upon a time, Flynn was hailed as a brilliant strategist and counterterrorism specialist. This earned him a promotion to lieutenant general, which is no mean feat.

Then, after having risen to such lofty heights in the military, he was fired as the director of the Defense Intelligence Agency and forced to retire. Next, Flynn made a career in right-wing politics as nutjob, Trump sycophant, convicted felon, QAnon believer, election conspiracy theorist, and, most recently, as a speaker at a religious revival tour that seeks to rally Christian nationalists behind the cause. That cause, by the way, seems to be turning the US into an autocratic theocracy — perhaps theocrazy would be a more apt description.

What deserves close examination is how Flynn was able to achieve such prominence. Not in the MAGA movement, mind you, because there’s no mystery in how a nutjob, felon, QAnon, election denier, conspiracy theorist, and religious zealot became a celebrity in that crowd.

No, we mean in the military.

Most of the articles on the rise and fall of Flynn focus on the fall. The rise, which took much longer, is usually either glossed over or not addressed adequately.

Which is a bit odd, because the fall is easy to explain. By all accounts, he seems like somebody who made up stuff, didn’t like playing by the rules (including sharing intelligence without authorization), is an Islamophobe, tried to cultivate Russia as an ally, is a religious zealot, and had a reason to hold a grudge against former President Barack Obama, who fired him. It would have been a miracle if he hadn’t pledged allegiance to Trump and QAnon.

What hardly any of the articles address is a much more important question going forward: How can somebody like Flynn get promoted to three-star general? There are more than one million people in the US Army and, currently, 64 of them are lieutenant-generals or higher. That means Flynn was in the 0.0064 percent of the Army and, in a couple of cases, his promotions were fast-tracked.

How did that happen? In all those promotions, did nobody ever notice that he brought a lot of treasonous energy to the table — along with a fair bit of crazy? We’re no military history experts, but isn’t he the most traitorous general since all those Civil War losers they still worship in the South?

Here is a suggestion for future military promotions. If you have sworn to “support and defend the Constitution of the United States against all enemies, foreign and domestic; that I will bear true faith and allegiance to the same; that I take this obligation freely, without any mental reservation or purpose of evasion,” then you should be able to answer this question: “Do you believe in the peaceful transition of power in the United States of America?”

To be fair, Flynn did have a response: He pleaded the Fifth.

So the questions that should be asked and answered are: Why wasn’t his radicalism detected in the military when he was up for high-level promotions? Or, if it was detected, why didn’t it hurt him? And, finally, could some of these traits even have helped him to rapidly advance through the ranks?

Here are some possible answers and what each of them means. We are loosely ranking them from most benign to most troubling, although all of them are disturbing in different ways.

First of all, though, let’s set aside the notion that Flynn “changed” after his military service. This is floated as an explanation in some of the profiles on him. But that notion is at odds with the aforementioned traits he displayed while in uniform. In addition, it’s not as though there isn’t a profile for rabid MAGA/QAnon supporters that Flynn meets (white, male, angry, Islamophobe, very religious, not bound by reality or facts, etc.).

It is also unlikely that he would have been able to mask his radical tendencies. This is the explanation offered by many of his peers in the various articles on Flynn. If you work with somebody every single day — and perhaps even more so when you are in the trenches together — then you figure out where he stands.

That brings us to one of two extremely troubling explanations: Flynn was promoted because the military values officers getting results over how they get them. And he did deliver results. Flynn was a noted terrorist hunter and someone who was able to “connect the dots” in their pursuit.

But did he “connect the dots” in the same way QAnon connects the dots now? In other words, how many rules and laws were broken to achieve that kill count?

That always seems to have been a question of secondary importance in the 20-year “war on terror” that saw hundreds of thousands of civilians lose their lives and the US engage in various (war) crimes like torture and “extraordinary rendition.”

Did US leaders and the top military brass care how many weddings were bombed and how many “enhanced interrogations” were conducted to bring to justice people whose crime was, in most cases, fighting an invading force?

If the answer is “no,” then Flynn’s promotions make sense in a “Well, good job since at least some of the dead were insurgents” kind of way.

And then there is a final explanation, and it is the most worrisome.

What if the military’s culture tolerates or even fosters (either intentionally or unintentionally) Michael Flynns?

Is it possible that he is a product of a culture that breeds extremism?

There is evidence that this is what is happening in the military.

Research has shown that extremism in the armed forces, as well as acts of extremism committed by those with a military background, are on the rise. For example, about 15 percent (120 individuals) of the defendants charged in connection with the January 6 insurrection had ties to the military.

The Biden administration has taken some steps to address this problem, but white supremacist organizations continue to recruit from the military and law enforcement.

Extremist groups like the Proud Boys and the Oath Keepers are turning to the armed services and police departments across the country to bolster their ranks.

Leaked data shows that two-thirds of the new members of the Oath Keepers who signed up after the attack on the Capitol had a military or law enforcement background.

There is a certain irony here. White nationalists now pose the biggest domestic threat. Considering the number of people with military backgrounds who participated in the attack on the Capitol, and the recruitment efforts of groups that target the armed forces, it stands to reason that some of the future perpetrators of violent attacks within the US will have honed their skills in the “war on terror.”

All of this raises perhaps the most important questions: If Flynn still had held a position of influence on Insurrection Day, what would he have done? And how many Michael Flynns are out there in the top ranks of the military, and what are they willing to do to harm the country they have sworn to defend?