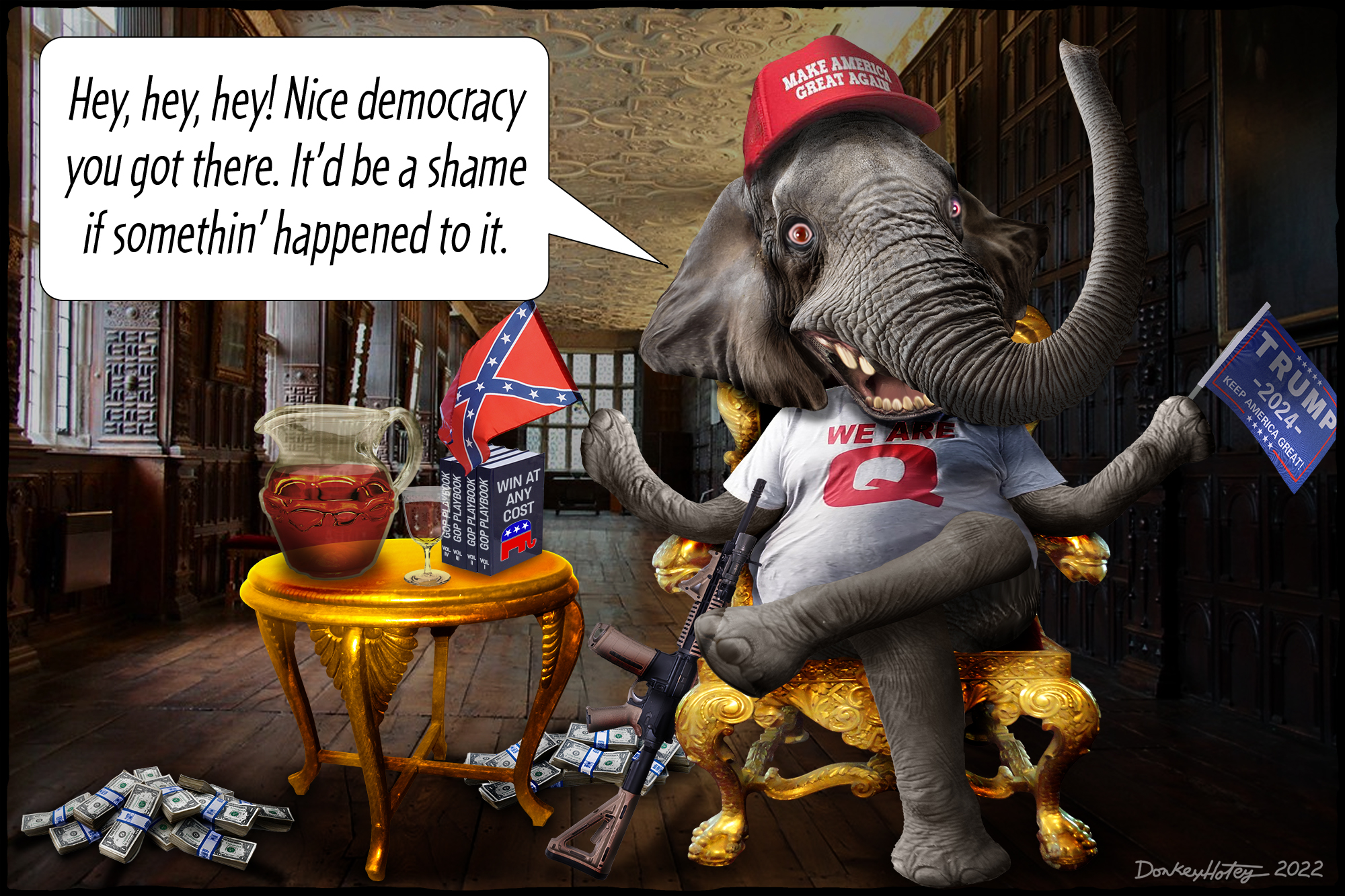 Throughout our history, there have always been groups of people that posed a threat to other humans or even humanity itself. For example, at some point, the greatest threat to others was probably the Mongol hordes, which were then replaced for a few centuries by European colonists who wreaked havoc across the globe.

The underlying motives for colonialism — money, religion, and power — generally played a role in whoever took the top spot as “greatest threat to humanity.” And all three bring us to the group that is currently the greatest danger to us all: Republicans.

That doesn’t mean that the GOP is the worst party on the planet, or that every one of its members is a terrible human being (although it admittedly requires a certain degree of moral bankruptcy to support many Republican candidates).

There are also probably more despicable organizations in the world, e.g., those supporting pedophilia or kicking kittens.

However, the title of “greatest threat to humanity” is not only a reflection of how vile a group is. Instead, it is about a combination of how much power the group has, its potential for doing damage to a large number of people, and how revolting it is (no pun intended, although January 6 and various polls have shown that Republicans clearly have an appetite for revolting).

Of course, the Founding Fathers didn’t want to protect the rights of actual minorities; they merely wanted to ensure that whichever group of white men was in power wouldn’t be able to be too mean to the group of white men that wasn’t.

Here, the modern GOP checks all the boxes. To be fair, it’s not as clearcut as when the Nazis held the top spot in the 1930s and ‘40s.

In our time, there is a lot more competition. We have Vladimir Putin’s Russia, which is trying to destabilize any functioning democracy and just started a war; China, which is seeking global dominance; and organized religion, which, for centuries, has been in the mix for “most destructive force.”

For now, however, Republicans are most deserving of this title. They wield incredible (and undeserved) power, their actions affect every living thing on the planet (most of them negatively), and these actions range from merely despicable to downright evil.

Let’s first look at how a party that has long given up on winning elections fairly, and that can’t get a majority of voters nationally to support their agenda (we’ll get to that agenda in a minute), has been able to amass this type of power.

It’s simple, really. All Republicans had to do was exploit every glitch and loophole in a political system that was designed to protect minority rights. Of course, the Founding Fathers didn’t want to protect the rights of actual minorities; they merely wanted to ensure that whichever group of white men was in power wouldn’t be able to be too mean to the group of white men that wasn’t.

In doing so, the GOP has used the laudable idea of not permitting the winners of an election to oppress the losers to create a tyranny of the minority.

And that has allowed Republicans to pursue their agenda, which is… nothing, really. The only thing the GOP is for is… being against things. Actually, that is a bit unfair. They’re not against everything — just fairness, equality, justice, opportunities for all, the environment, peace, and minorities, which, in this case, actually means minorities (anybody who is not a white, straight, conservative “Christian”).

Still, this by itself would not make Republicans the greatest threat to humanity. Because, while it may suck for a 13-year-old raped by her dad to be forced to carry to term a dead fetus that will likely kill her — just because she happens to live in a red state — that’s not really a problem for the rest of the world.

Neither is it that millions of Americans don’t have health care or are not able to enjoy many of the rights people in peer nations take for granted.

What does make Republicans the most destructive force is that they are preventing the most powerful country on the planet from making meaningful progress on solving the most pressing problems of our time.

First and foremost, they have stood in the way of steps to address climate change — both in the US and abroad — while supporting policies that make the problem worse.

The GOP’s anti-science, pro-religious fundamentalist approach has not only harmed the environment but also stifled progress in the medical sector and a variety of other fields.

In addition, its pro-military policies (which, in fairness, many Democrats share) have contributed to conflicts across the globe in the past few decades, including two major wars started by the US that helped destabilize entire regions.

Together, this new axis of evil seems poised to convince enough low-information Americans that it would be in their best interest to once again hand the keys to the country to the GOP. We know how this ends: with America in a ditch.

Finally, it should not be underestimated how harmful the GOP’s efforts to undermine US democracy are — not just at home but also abroad. Especially recently, the rise of Donald Trump has contributed to similar “leaders” coming to power in places like Brazil, which barely just ended its own neo-fascist nightmare. And he has emboldened similar “leaders” in countries from Hungary to the Philippines.

However, it should be noted that Trump is not to blame in this case. He has only shown the world what the GOP has become.

What is most tragic is that it didn’t have to be this way. Fifty years ago, the GOP would not have been anywhere close to “the world’s most destructive force.” Back then it was, in many ways, a fairly moderate party before it dramatically shifted to the right while the US’s peers have generally embraced more progressive ideals.

Perhaps not coincidentally, the US still had a vibrant middle class back then. Now it has a tiny minority of millionaires and billionaires (who primarily fund Republican candidates), a “middle class” mainly consisting of people who hope to never have a major medical emergency, young people burdened with crushing student debt, a bunch of poor white people who think they are the middle class (and therefore vote Republican), and poor people who know they are poor.

You can thank the GOP for that.

But it would be unfair to just blame Republicans… because they had plenty of help. On the one hand from white evangelical leaders, who are a destructive force in their own right.

On the other hand, the GOP is supported by the who-is-who of “the world’s worst corporations.” You have oil companies, who are throwing money at Republicans so they can continue to position humanity closer to climate doom in exchange for a few more years of obscene profits.

Then there are the social media giants who prefer making a killing from stoking division and allowing the unfettered spread of misinformation and lies rather than being a force for good. This helps Republicans because their supporters are much more likely to believe in “fake news.”

And, finally, there is Fox “News,” probably the worst of them all. This time around, the propaganda network once again went all out to get Republicans elected through an unending torrent of deceit and lies.

Together, this new axis of evil seems poised to convince enough low-information Americans that it would be in their best interest to once again hand the keys to the country to the GOP. We know how this ends: with America in a ditch.

To be clear, this editorial is not an endorsement of any Democratic candidates. Instead, it is simply a repudiation of a GOP that is morally bankrupt, revels in vileness, and seems determined to make the planet uninhabitable.

You have a couple of days left to prevent this from happening, so vote accordingly!