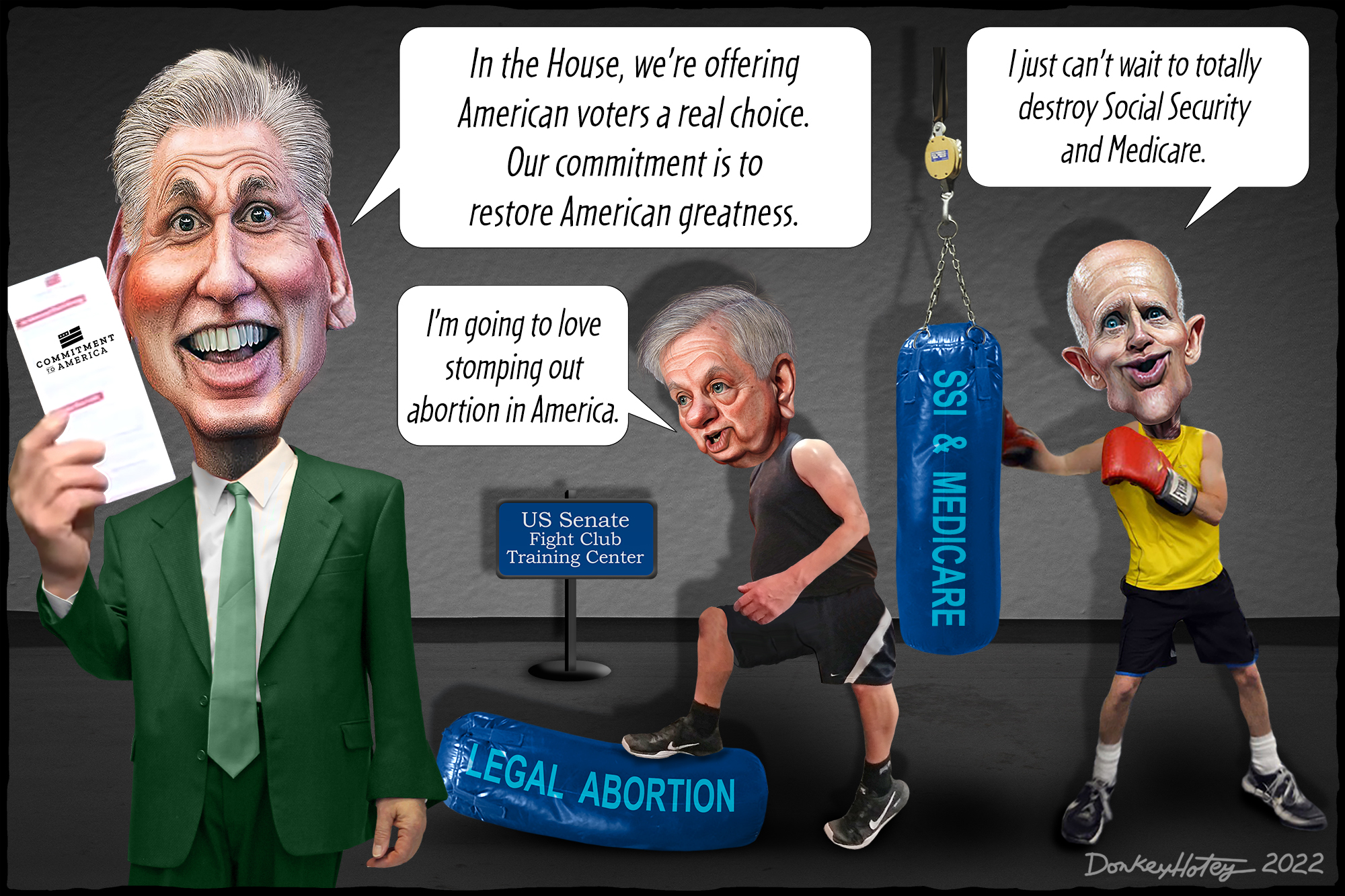 For GOP, Silence About Policies Is Golden

It’s easy to find out what Republicans are against: democracy, minorities, minorities playing fish in movies, minorities playing flutes, books that offend Republicans, accurate US history, (brown) immigrants, attacks on marriage, gay marriage, interracial marriage (this one is making a comeback after 50 years), restrictions to religious freedoms, religious freedoms for Muslims, things they perceive to be “socialism,” and (unarmed) teachers.

We know this because they go on right-wing media every day and tell us about their grievances. Of course, the list above is just a tiny sampling. There are a lot more things the GOP is against. But what, specifically, are Republicans for? That’s much more difficult to ascertain — because it’s something they do not talk about a lot. And that’s by design.

It’s easy to see why: The GOP’s winning strategy could best be described as “enrage to engage.” This, not accidentally, is also the business model of Fox “News.” Essentially, the goal is to make sure that voters are angry enough at all times to give money to Republicans and show up to vote, but not angry enough to write manifestos and start murdering all those liberal evildoers. With a few deadly exceptions annually, that has worked pretty well.

Heading into next month’s midterms, the GOP has several advantages: After another round of gerrymandering and voter suppression laws, there are now 188 “safe” Republican House districts as well as 13 that are “likely” Republican (as opposed to 162 and 13 for the Democrats). That means the GOP already has more than 90 percent of the 218 seats it needs locked up before a single vote is cast.

In addition, the party of the president almost always loses seats in the midterms. In many ways, this election comes at a particularly bad time for Democrats. While job growth is booming as the country continues to recover from the coronavirus pandemic, high inflation and high gas prices give voters the impression that things are not going well. And, to be fair, they aren’t great.

However, these problems are not unique to the US. In fact, they impact some peer nations much more. For example, while US gas prices soared to an unprecedented average of $5.02 in June, they were 50 percent higher in many EU countries.

And though US inflation is high, it just hit double digits in Germany — Europe’s largest economy.

This is especially true for consumers of right-wing news. While Democrats and independents (generally) get a fairly accurate description of what is happening from regular news outlets — perhaps with a somewhat liberal bent — Republicans are spoon-fed a steady diet of lies, propaganda, and misinformation.

When you add up all of these advantages, even a group of complete morons and coup supporters could win this election. Which is great news for the GOP because that’s what a lot of their candidates are.

There is only one thing they should not do: tell voters what kind of policies they want to put in place once they are in power — because those policies are almost universally unpopular.

But before we get to that, it’s important to distinguish between House candidates and those running for statewide office. Thanks to gerrymandering, even the greatest kooks can win their House races in districts drawn to, well, allow even the greatest kooks to win. For proof, look no further than the current cast of loons in the Republican caucus.

In gubernatorial or Senate races, however, gerrymandering doesn’t work (although voter suppression does). Here, the strategy of nominating nutjobs and extremists, most of whom won their primaries thanks to the backing of former President Donald Trump and/or Fox “News” hosts, isn’t working out so well.

In addition to nominating a motley crew of quacks, conspiracy theorists, traitors, and imbeciles, GOP Senate candidates are hampered by another problem: Their party injudiciously told voters what they would do if given power.

Specifically, Sen. Rick Scott (R-FL), who is chairing the National Republican Senatorial Committee (NRSC), gave away the game when he published an 11-point plan to “Rescue America.”

The NRSC, by the way, is the group tasked with getting Republicans elected. The “Rescue America” plan is doing the opposite.

It starts out with a laugh for anybody who appreciates irony (but probably also caused constitutional scholars — or anybody with fleeting knowledge of the principles the US was founded on — to pull their hair out).

The first item on this agenda includes the following two bullet points:

“We will not allow political or social indoctrination in our schools. Teachers who refuse to comply will need to find new jobs.”

“Public schools will teach our children to love America because, while not perfect, it is exceptional, it is good, and it is a beacon of freedom in an often-dark world.”

If only Scott were as good at recognizing irony as he was at defrauding Medicare or wasting campaign contributions.

However, things quickly get scarier. Apparently, rescuing America involves raising taxes on the bottom 50 percent of Americans, work requirements for anybody under 60, more incarcerations, putting Medicare and Social Security on the chopping block every five years, making things easier for tax cheats, banning abortion, putting profits ahead of saving the environment, and, of course, building a wall (and naming it after Trump).

Since then, Scott has rowed back some of these things, and other Republicans have condemned parts of his plan, but their real objection is probably not with the policies themselves — but rather that Scott blurted them out loud before the election.

The same happened when Sen. Lindsey Graham (R-SC) proposed a national abortion ban last month. His colleagues and conservative commentators chastised him even though just about every one of them would tell their constituents that they are in favor of such legislation.

House Minority Leader Kevin McCarthy (R-CA) was much smarter when he rolled out his own plan. By the way, this may be the only time ever that the words “Kevin McCarthy” and “smarter” have been used in the same sentence.

His “Commitment to America” is an “outline of vague principles” instead of actual proposals. And that’s always been something Republicans have been very good at: offering patriotic-sounding slogans without ever getting into specifics.

In five weeks, we’ll know if they’ll get away with it once again. Right now, the odds are looking good for McCarthy to become the next Speaker — if he can just keep his candidates from telling the truth about the GOP agenda.