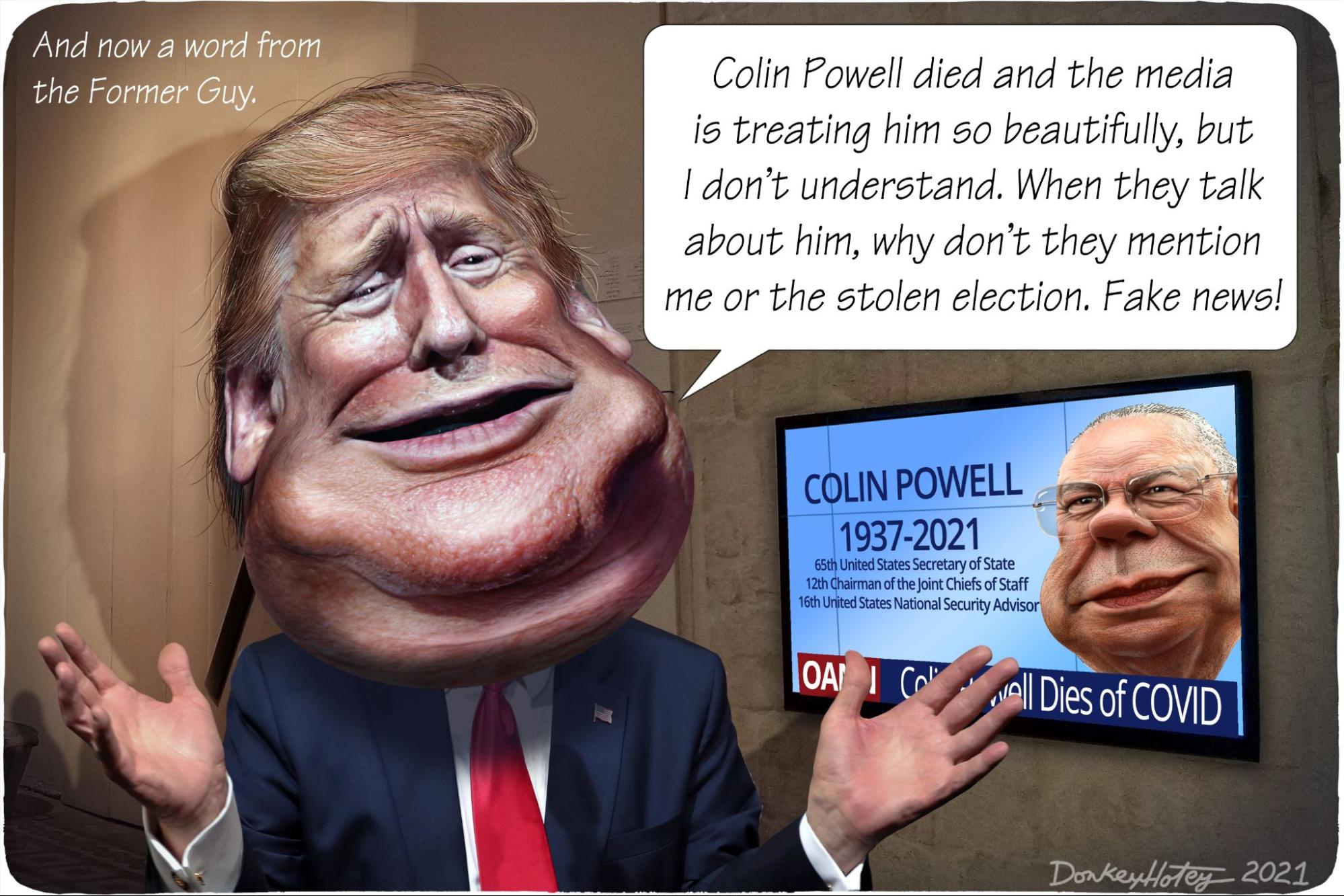 Donald Trump: The Art of the Press Release

Former and/or current and/or soon-to-be-reinstated President Donald Trump — depending on whether you are talking to a person living in the real world, a majority of Republicans, or a dude selling pillows on TV — made waves with a statement on the death of Colin Powell. 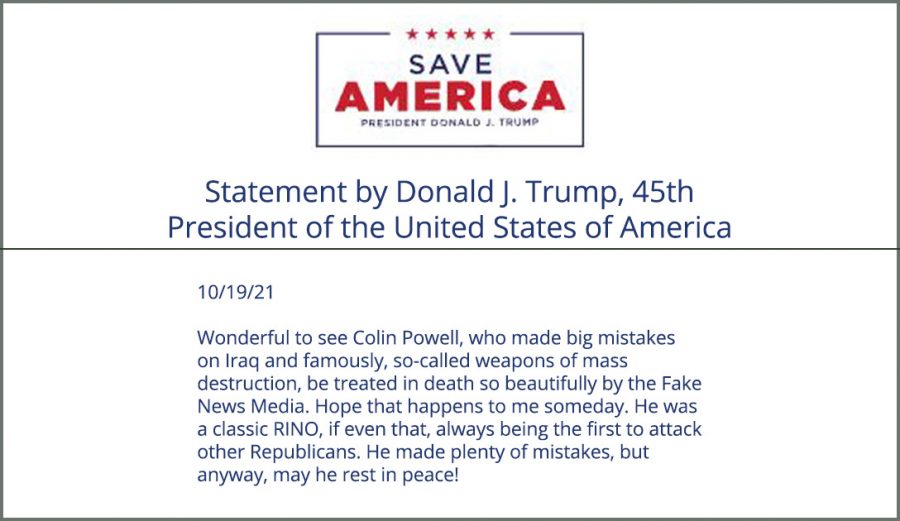 The most shocking thing about it is that people were actually surprised. After all, it is very much on-brand for Trump.

What those who were (or pretended to be) outraged did not realize, however, is that it could have been much worse. People assume that Trump, whose lack of impulse control is actually one of his most endearing mental disorders, simply types or dictates these statements before sending them out.

Nothing could be further from the truth. The publication of the statement was preceded by a vigorous email debate between Trump and his staff on how it should be worded. This is not something the public is usually privy to, which is why we are delighted to announce that we have exclusively obtained these emails.

As you may have seen, former Secretary of State Colin Powell died this morning. When somebody of his stature passes away, it is customary for the country’s “elder statesmen” — and obviously also legitimate presidents who were cheated out of victory — to release a statement. I have prepared a draft for your approval.

“With profound sadness, I learned of the passing of Colin Powell this morning. He was a true public servant and, as the country’s first Black secretary of state, a genuine trailblazer. Today, we lost a great American, and Melania and I want to express our heartfelt condolences to his family.”

No. Collin was very Nasty to me. Also, this does not mention that media hates me and that I won the election.

How about this: “As your beloved President it is my pleasure to inform you that Collin Powell has died. He was a very mean man and lied about weapons in Iraq and about me being a racist. The Blacks love me. The Fake New Media loved him, which shows he was Bad. They should love me because I gave them Huge Ratings. He also said I tried to overturn the election when I won all of the states and in Michigan there were more voters and in urban places they had Dominion voting machines and it was all Rigged.

You are obviously right about all of these things but, possibly, it might be wise to take the high road today.

Maybe we can incorporate some of the points you make into a statement that focuses more on the legacy of Secretary Powell on this. We could follow this up after the funeral with a statement pointing out that you were right about Iraq.

How about this: “I may not always have seen eye to eye with Colin Powell, but he was undeniably a great American. Both as a soldier and a diplomat, he served the country with distinction and was beloved by the media. Melania and I mourn his passing and want to express our heartfelt condolences to his family.”

Your Statement is not at all about Me. It has to be about Me. Mememememe!

At least you have something about the Fake News Media. Now we have to talk about how he made so Many mistakes.

Like this: “Collin Powell was a loser. He lost the Respect of everybody when he lied about so-called weapons of Mass destruction at the UN. They laughed at him but they did not laugh at me that one time. They laughed with me, so it was different. Now he lost his life. They say it’s Covid, which I totally survived. It was easy because I am the healthiest president of all time. But Collin was Sick. May he rest in peace (which I totally brought to Afghanistan until Sleepy Joe screwed it up).”

We should also say he was a RINO.

Lots of great stuff. You are right that your statement is clearly better than mine. You are a genius. Just a couple of minor suggestions: It might not be great to hint at the deal you made with the Taliban. We are also going off-track a little bit with the UN stuff. Those are globalists anyways and you are all about America first.

I think you will like this draft: “Colin Powell was respected by many Americans and beloved by the media for transcending partisanship and criticizing members of both parties. While his long career featured missteps, such as his role leading up to the invasion of Iraq, he dedicated decades of his life to serving the United States. For that service, he deserves praise. Melania and I mourn his death and offer our heartfelt condolences to his family.”

Why won’t you just let me have this Moment.

Enough debate, I want to say this:

“Wonderful to see Collin Powell, who made Big mistakes on Iraq and famously, so-called weapons of mass destruction, be treated in death so beautifully by the Fake News Media. Hope that happens to me someday. He was a classic RINO, if even that, always being the first to attack other Republicans. And he was very mean to me. But anyway, I am happy he is dead!”

You are a beacon of eloquence. So this is what we will publish, right?

“Wonderful to see Colin Powell, who made big mistakes on Iraq and famously, so-called weapons of mass destruction, be treated in death so beautifully by the Fake News Media. Hope that happens to me someday. He was a classic RINO, if even that, always being the first to attack other Republicans. He made plenty of mistakes, but anyway, may he rest in peace!”

Yes. Now bring me a hamberder!

Editor’s Note: Any reader, and certainly a very stable genius, should recognize that this is a work of fiction. Alas, due to the litigious and vindictive nature of the former president, we wanted to make sure that we label this as satire. However, should Mr. Trump come across this editorial and feel compelled to send us one of his trademark statements, we would be more than happy to help him work on a draft. If he needs additional ammunition, we refer to this story, in which we predicted more than two years ago how much of a mess he would make after losing the election.