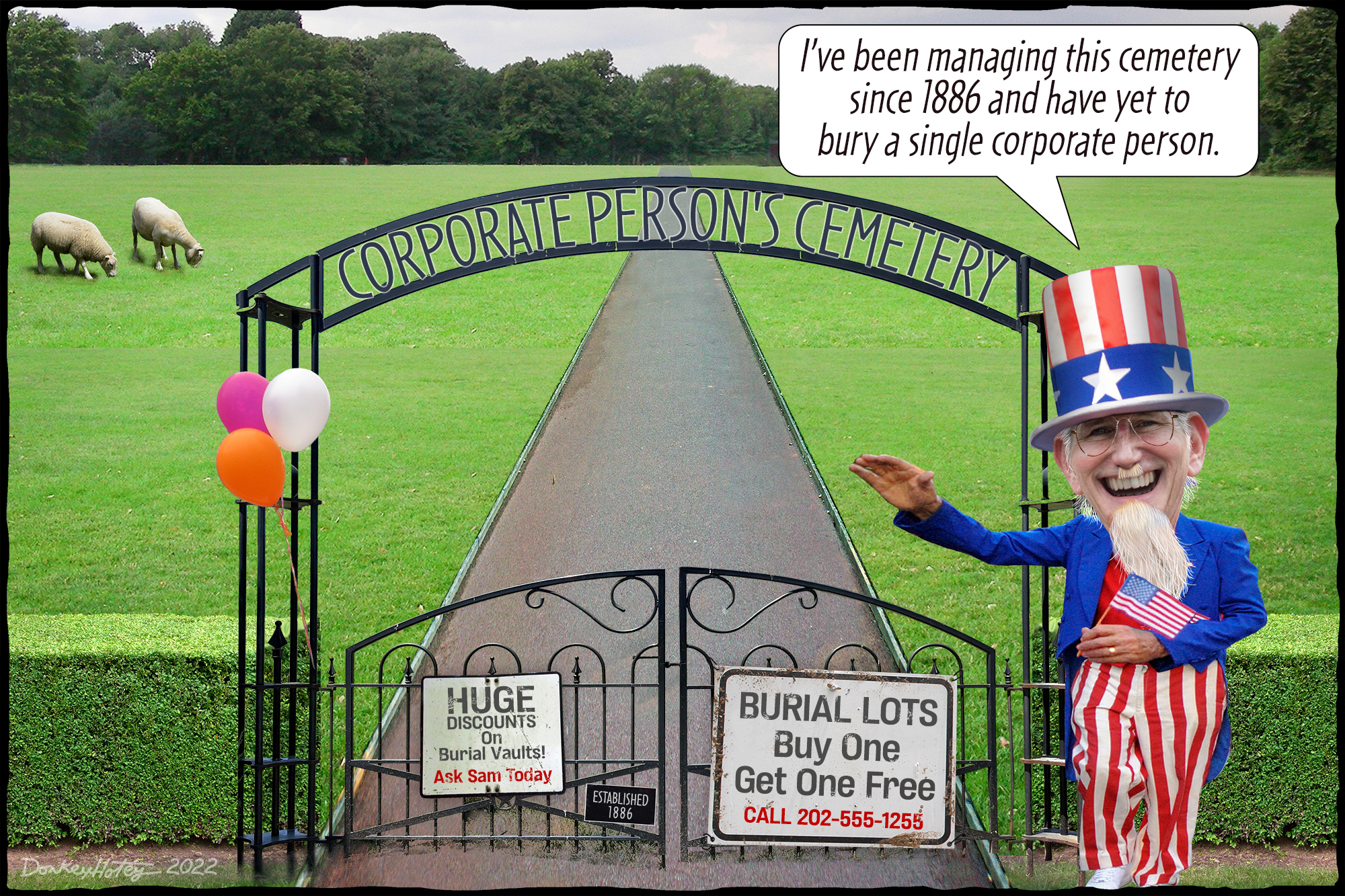 Crime and No Punishment

In the US, there are two types of people: actual persons and corporations. If you think that this sounds insane, then you are clearly not a corporation.

In reality, the “actual persons” category also needs to be divided into “people who are rich and can do just about whatever they want” and “the rest of us.” If you are wondering in which group you belong, then the answer is “the rest of us.”

But let’s forget about actual human beings for now, and instead focus on the category of people that doesn’t actually include people. This is why the current taxonomy of homo sapiens is a bit confusing. After all, it’s like saying: “I love baby animals, such as kittens and baseball.” The latter is as much a baby animal as a corporation is a person.

Maybe this would even be OK if corporations were part of “the rest of us.” Sadly, they squarely belong in the category of “people who are rich and can do just about whatever they want.”

Here is an example: Earlier this month, the Trump Organization (the former president’s real estate company) was found guilty on all charges of carrying out a 15-year tax fraud scheme. The charges included tax fraud, falsifying business records, and conspiracy.

Now, if businesses really were people, anybody involved in this fraudulent scheme would be going to prison. If you don’t believe us, why don’t you give it a try? See what happens if you falsify your records and defraud the IRS for more than a decade.

So, is anybody going to jail in the Trump Organization case? Certainly not anybody named Trump (to be fair, the guy who took the fall for the ex-president is going to go to prison for a few months). Turns out that, if you own and/or run a company that lied to the IRS for 15 years and engaged in a criminal conspiracy, it’ll cost you a maximum of $1.6 million — but no jail time.

One of the many news accounts of the guilty verdict pointed out that, “while the fine is not expected to be material for a company of the Trump Organization’s size, the conviction could complicate its ability to do business.”

As though a bunch of Russians, Saudis, Qataris, etc. aren’t already waiting in the wings to help out old Donald with a cash infusion of some sort. It doesn’t even have to be legal because it’s not as though the punishment would be harsh.

Why should any billion-dollar business comply with tax laws if the punishment is only a slap on the wrist? If they even get caught, that is.

By the way, for once, this isn’t just about Trump. Yes, he is a crook and a grifter (sometimes hilariously so, as he proved this week… and you really should check out the pictures), but these are the laws that apply to all corporations.

Why should any billion-dollar business comply with tax laws if the punishment is only a slap on the wrist? If they even get caught, that is. (Note: although corporations are people, they do not actually have wrists.)

Then, to add insult to perjury, so to say, it came to light earlier this week that the entities of the Trump Organization that were on trial were held in criminal contempt for failing to provide evidence, and for not complying with multiple grand jury subpoenas.

Let’s assume for a second that Trump is the billionaire he claims to be. That’s a stretch, of course, but humor us. For someone with a billion dollars, a fine of $4,000 is the equivalent of less than a nickel for somebody with $10,000 in the bank (which the majority of the people in the “rest of us” category do not have).

Why would anybody produce incriminating evidence when the penalty for not doing so is a joke?

And then Manhattan District Attorney Alvin Bragg had the gall to step in front of cameras and celebrate this “victory” as evidence that “in Manhattan, we have one standard of justice for all.”

Maybe for all corporations, but if you rob a bank on Wall Street, we’re pretty sure you won’t just pay a meaningless fine if caught.

Want another example? This week, The New York Times reported that Twitter, in an effort to cut costs, “has not paid rent for its San Francisco headquarters or any of its global offices for weeks” and “is considering not paying severance packages to former employees.”

If you want to know whether corporations are held to the same standards as people, stop paying rent for a while and explain to your landlord that you are trying to cut costs. Good luck!

None of this will get better until there is real accountability. If corporations are people, then come up with an equivalent of jail for them. Instead of paying a measly fine, maybe the Trump Organization should not be allowed to do any business for as long as a regular person would go to prison for committing years of tax fraud.

Fines do not matter for people who have money. For example, a few years back, the Occupational Safety and Health Administration fined BP a record $50 million for an explosion that killed 15 workers. That sounds like a lot. But in light of the billions of dollars BP makes ($8.2 billion in the last quarter alone), it’s a drop in the bucket.

In fact, for many companies, fines just seem to be considered a regular cost of doing business.

For things to change, at the very least financial penalties for corporations and their executives should be tied to their revenue and compensation. Let’s see if they are so quick to violate laws and regulations if they have to pay billions of dollars.

Obviously, the solution to these problems would be to craft new laws. There is just one big obstacle: Our laws are written by legislators who get their money from two kinds of people: the wealthy and corporations.

And even that might not be enough. Just look at Alex Jones, who was sentenced to paying $1.5 billion for spreading his Sandy Hook lies. He has since filed for bankruptcy. But, of course, that doesn’t mean that he’ll end up living in a van down by the river. Chances are that he will be just fine.

Of course, the reality is even worse because there are hundreds of thousands of people in jail right now who have not been convicted of anything and simply can’t post bail.

Obviously, the solution to these problems would be to craft new laws. There is just one big obstacle: Our laws are written by legislators who get their money from two kinds of people: the wealthy and corporations.