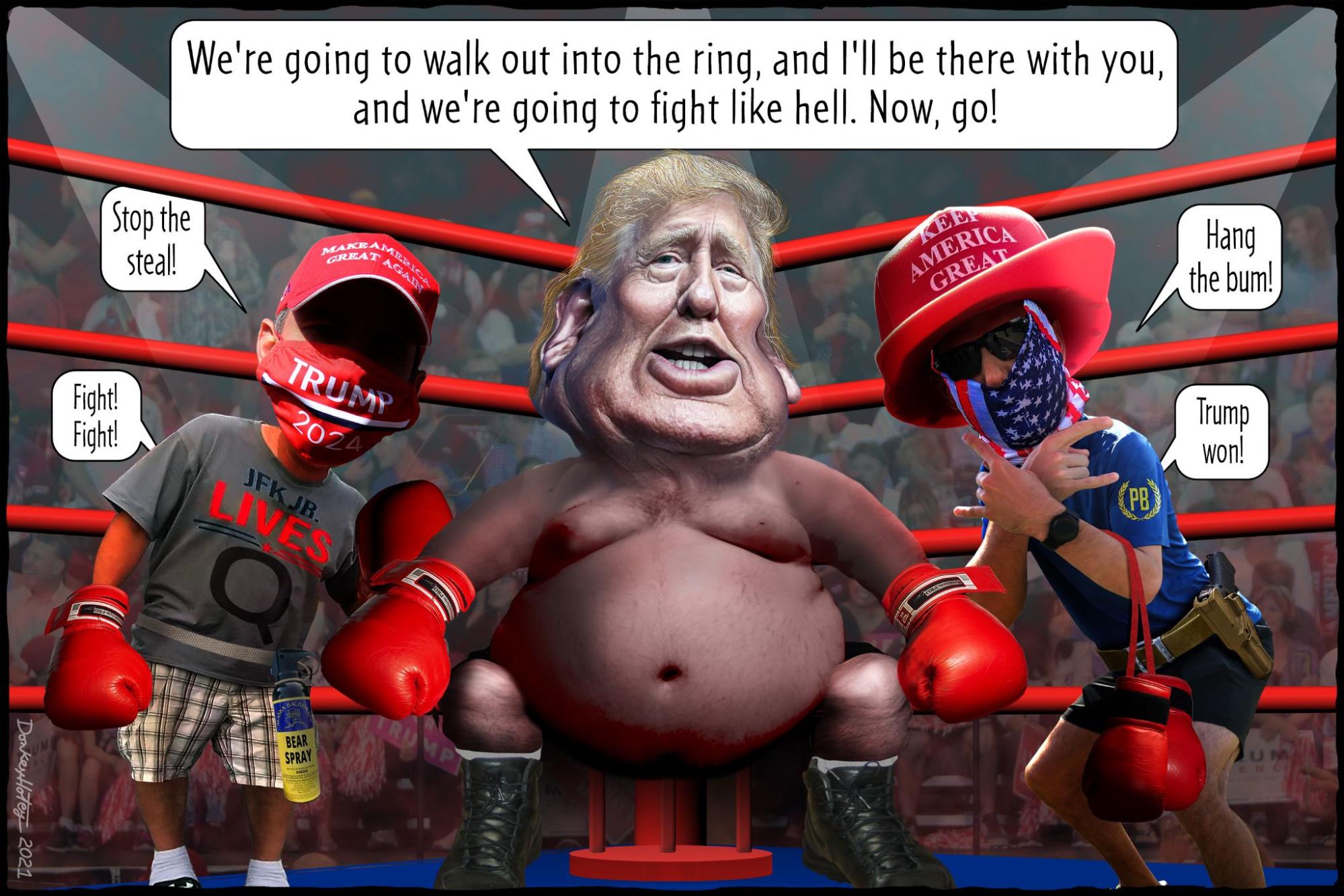 Army of None: Unraveling the Myth of ‘Trump the Fighter’

It’s been almost a year since supporters of Donald Trump held their HangMikePence-athon outside (and then inside) of the Capitol, or, as Republicans (including Pence) would rather like it to be known, the Coup de Blah of 2021.

This means that just about every media outlet will spend the week looking back on the events of January 6 and undoubtedly lay the blame for what happened squarely at the feet of Trump. Well, at least every media outlet that doesn’t have the words “Patriot,” “American,” or “Fox” in its name. Those, of course, will pretend nothing happened.

Not us. We are going to do something very different.

We are going to set aside the overwhelming proof showing that Trump lost decisively, and pretend that his claims of a “stolen” election have merit.

Why would we do such a thing when there is zero evidence that these accusations could possibly be true?

Because we believe that indulging Trump’s delusion in this case helps dispel a myth that is at the center of the MAGA cult (a myth being perpetuated by the former president himself): that Trump is chosen; and that he is the ultimate alpha male, a fighter, a gritty, tough brawler who will stop at nothing to get stuff done for his supporters.

While it may seem hard for outsiders to believe that anybody would worship a whiny, flabby manbaby as the epitome of masculinity, Trump’s supporters clearly do… and he obviously revels in this idolatry.

For example, early in his term in office, he retweeted a video of himself body-slamming CNN. A couple of years later, Trump retweeted an image of his head photoshopped onto the muscular body of fictional boxer Rocky Balboa.

(As an aside, after a year of Trump having largely disappeared from public view, we tend to forget how truly insane his time in the White House was.)

MAGA world is rife with this type of imagery (if you never click on links, you may want to make an exception in this case because… wow!). While that’s admittedly very weird, you may ask what the right’s fetish with the body of an obese septuagenarian has to do with the election.

For the sake of argument, let’s assume that a conspiracy involving a long-dead Venezuelan, Chinese bamboo ballots, several GOP-controlled states rigging things against their own nominee (but not other Republican candidates), thousands of people, and possibly a kraken, for some reason, really did cost Trump a well-deserved victory in November 2020.

In that case, the former president would certainly be right to call this the “crime of the century,” as he frequently does.

Even worse, in Trump’s reality, this “rigged election” left the country in the clutches of a senile socialist who is dismantling the very fabric of the United States piece by piece.

Doesn’t that sound like the perfect opportunity for a messiah-like superhero to swoop in and save the day?

Of course it does.

And isn’t that exactly how Donald “Only I Can Fix It” Trump (along with the entire MAGAverse) sees himself?

Of course he does.

So what’s the problem?

The problem is that, like so much else in the alternate reality that the former president and his supporters have created, it’s all bullshit. 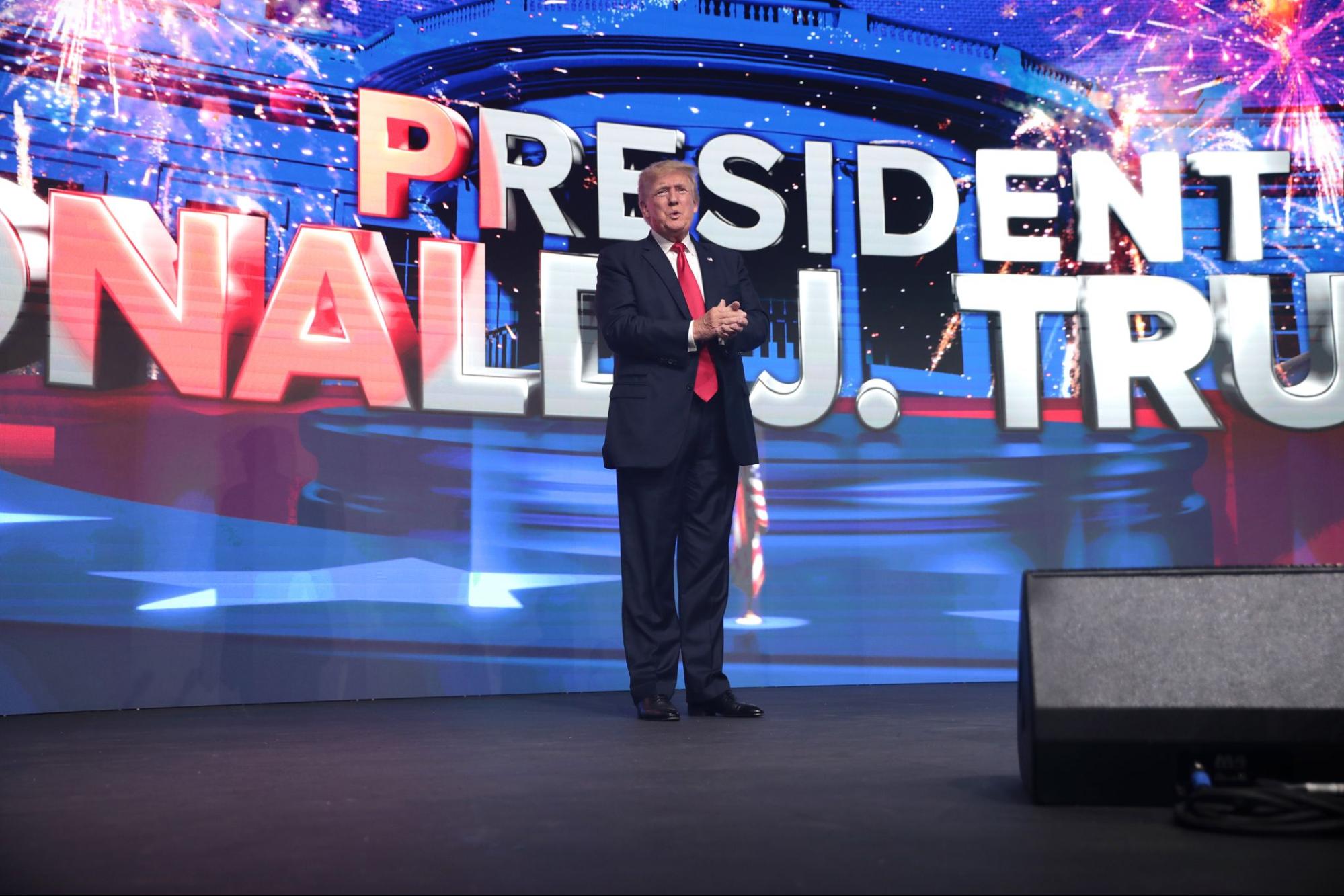 That’s because the only time Trump fights is to save his own hide. Case in point: He has put considerably more effort into trying to block the release of his documents (both those related to the insurrection and his taxes) than into getting to the bottom of the “crime of the century.”

Which makes sense, because he knows it’s complete nonsense and just another way to bilk his supporters. In the first half of 2021, Trump’s “Save America” committee raised $62 million. That kind of money might come in handy when trying to solve the mystery of how a hugely unpopular president could possibly lose an election: For example, it would pay for hiring investigators and experts or offering rewards to anybody who has knowledge of how this amazing election heist was pulled off in so many different states.

To the surprise of no one who is paying attention, that is not what happened. Instead, the group spent just $3 million (including tens of thousands at Trump hotels) while hoarding the rest for a 2024 run.

In other words, Trump is doing virtually nothing to right this alleged historic wrong.

However, in true Trumpian fashion, his sycophants answered their hero’s call… and are now paying the price.

That includes not only the hundreds of insurrectionists who have been charged with crimes committed on January 6, but also high-ranking Trump officials who may be in legal jeopardy for their own actions related to the attempted coup, are facing criminal contempt charges, have already been indicted, or have pled the Fifth to escape with “only” a loss of reputation.

This really is classic Trump. He does something shady/illegal, but others take the fall, and he escapes with a slap on the wrist at best.

We may even see this play out in real time next week when Trump plans to hold a press conference on the anniversary of his insurrection and will undoubtedly present a slew of old and new lies. Let’s just hope that his rhetoric doesn’t get people killed again.