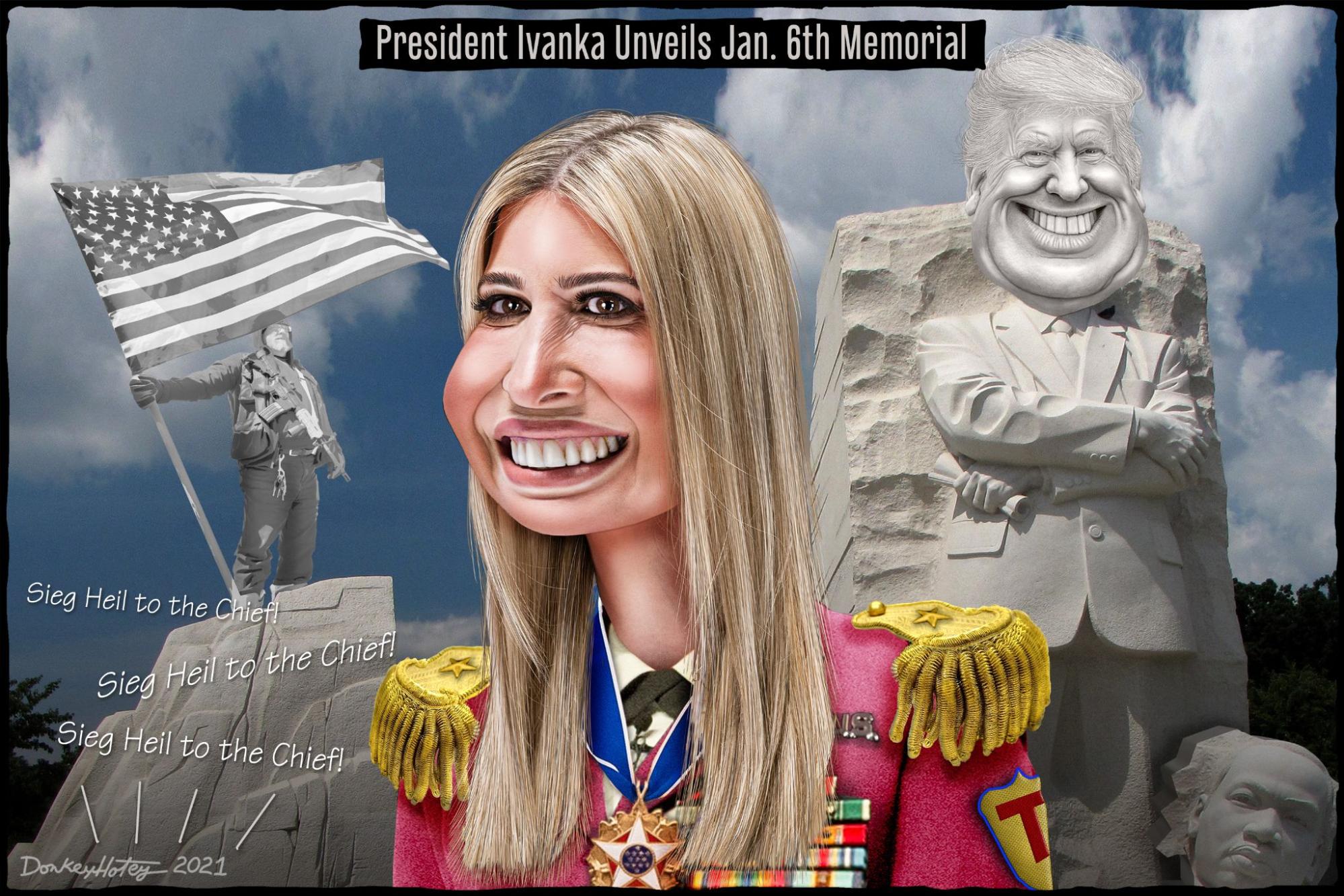 A year after former (and quite possibly future) President Donald Trump’s attempted coup, Republicans across the country remain busy systematically dismantling US democracy.

Led by Democratic leaders and their “aw-shucks” approach to this crisis, most Americans don’t seem to grasp the urgency of the situation.

Maybe, after 232 years of regular elections and 228 years of orderly transitions of power, they are taking democracy for granted. That’s a grave mistake — because it is rapidly slipping from their grasp. Or, more accurately, it is being ripped away from them.

Because, make no mistake about it, the GOP’s commitment to ramming an unpopular agenda down the throats of Americans is much greater than its commitment to democracy.

At this very moment, while you are reading this, Republicans are engaged in an organized, multi-pronged attack that aims to create a system that will allow them to seize power even if they lose elections.

In theory, they could still be stopped in 2022 — at least to some degree. In practice, that’s not going to happen. This is one of those cases where we really wish we were wrong. However, just as we correctly predicted in 2019 what would happen if Trump narrowly lost the election (i.e., by 7 million votes), history will prove us right again in this case. 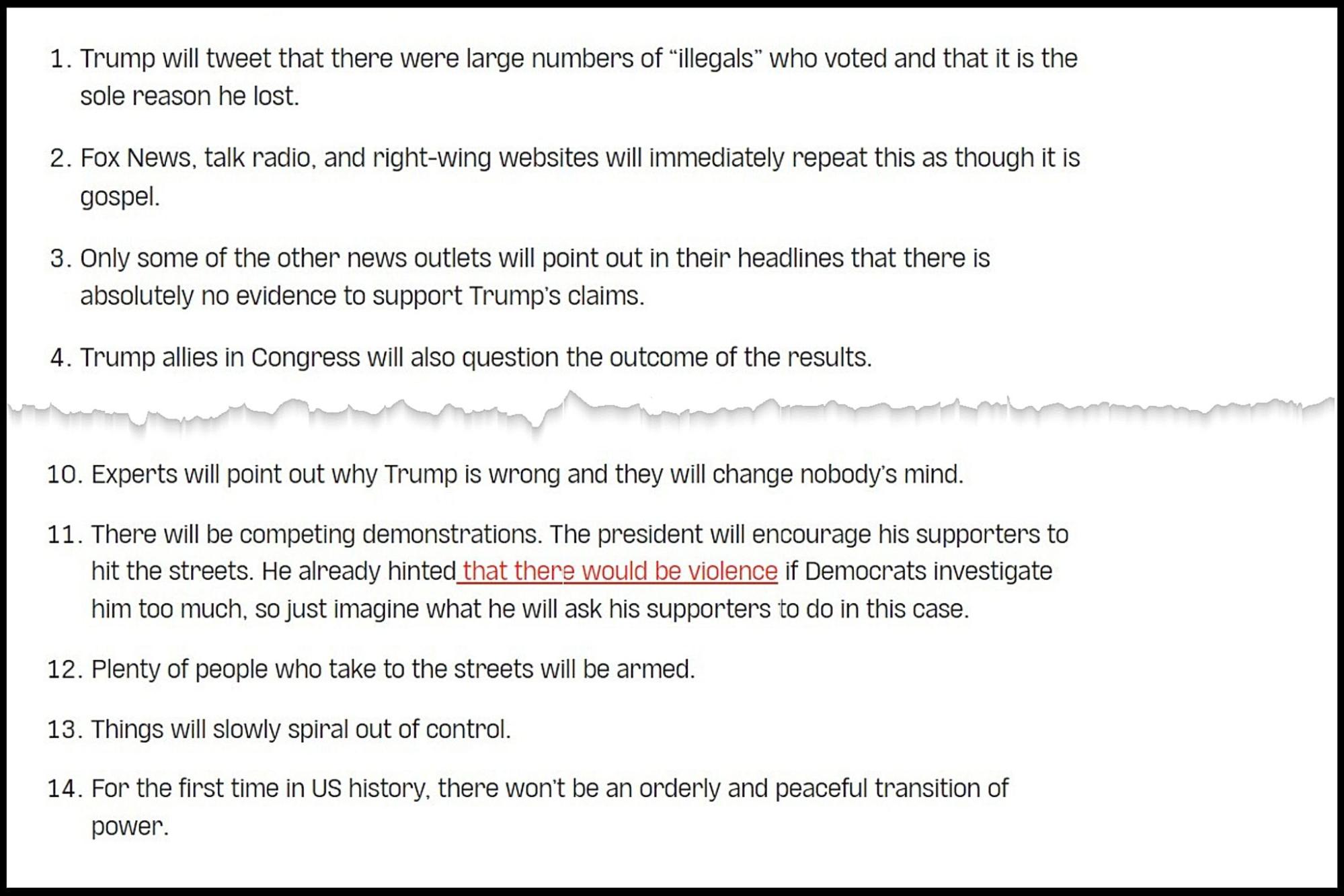 So, as we fondly bid farewell to democracy in the US, here is a glimpse at what things will look like in 2032. This is written from the perspective of the UK-based Reuters wire service because, once democracy goes in the US, a free press won’t be far behind.

It’s Another Trump in US ‘Election’

The Monday before the US election has become a bit like Groundhog Day. When Josh Hawley, the High Commissioner of Elections, emerges from his office, it’s always four more years of Trump. This time, it’s Ivanka Trump’s turn at the helm of the no-longer United States of America.

The reason why her victory was announced a day ahead of the actual “election” is that the Vote Reallocation Act, which was passed last year, now allows so-called Voter Fraud Detection and Presidential Selection Boards in Republican-controlled states to certify a winner ahead of time if there is “no reasonable expectation that the counting of the votes will change the anticipated outcome.” Not that it would matter, because Trump was the only candidate allowed on the ballot in enough states to secure a majority in the Electoral College, or Trump University II, as comedian Jimmy Kimmel recently called it.

In a press conference held at the Heroes of January 6th Memorial, which has replaced the Martin Luther King, Jr. Memorial on the National Mall, President-select Ivanka Trump thanked her supporters and promised to continue the policies of her late father and her brother Don Jr., whom she succeeds.

“I will continue the ‘America First’ agenda that has served my family so well,” Trump said, adding that she would “lead the country in a way that will make things easy for [her younger brother] Barron when he takes over in eight years.”

Bucking tradition, Trump announced that she would not be inaugurated at the Capitol but rather on the steps of the recently completed Donald J. Trump Greatest President Monument. 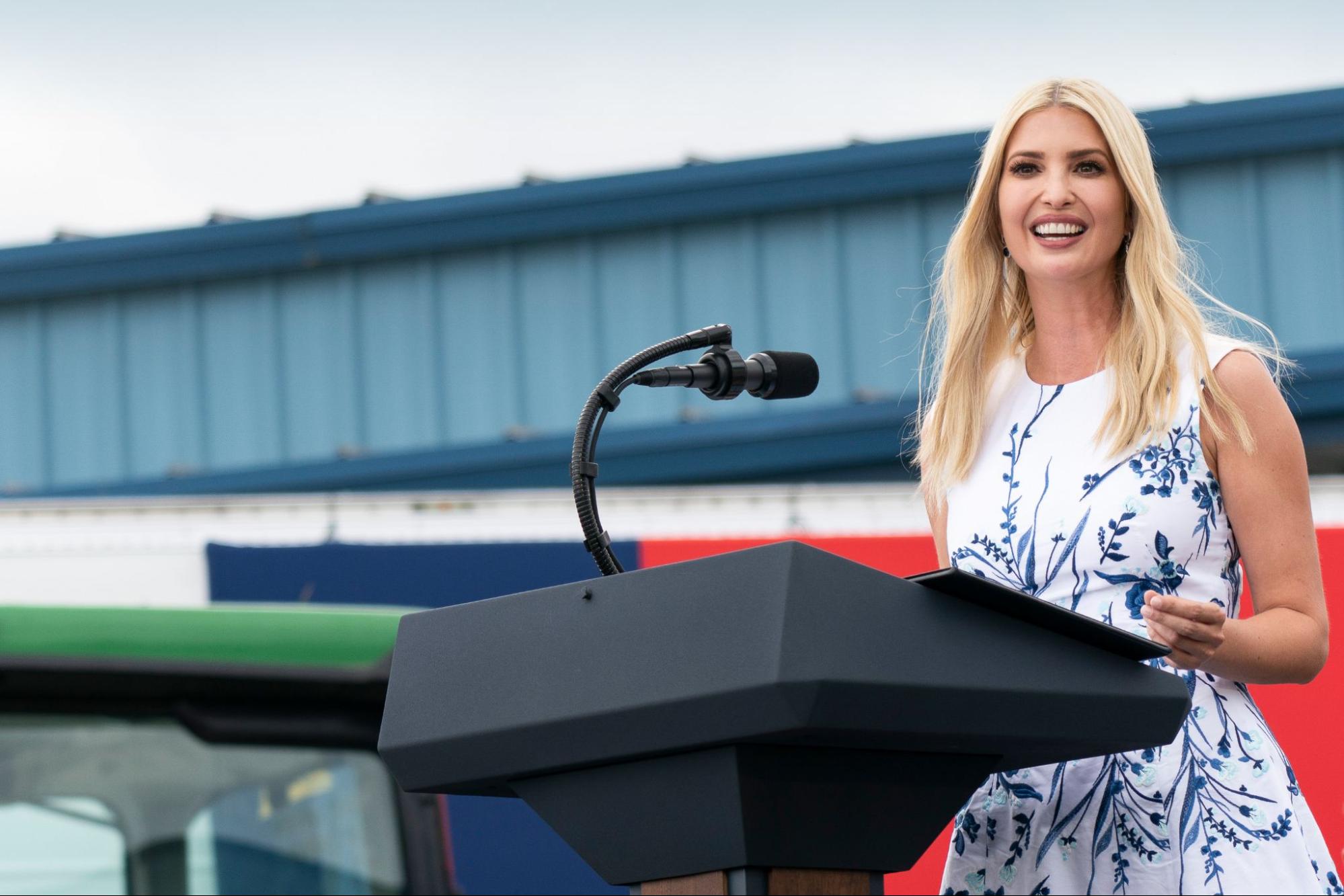 A Once-Proud Democracy in Freefall

All of this has members of the international community scratching their heads. Well, kind of.

On the one hand, the US’s plunge from a bedrock of global democracy to a two-bit autocracy is stunning. On the other, it seems inevitable in hindsight. In fact, both Democrats and Republicans warned that this would happen after former President Donald Trump’s coup attempt in the aftermath of his 2020 election loss.

“The Civil War in the US was fought to free the slaves and give them the right to vote… well, at least the male ones,” she said. “But the North then turned a blind eye when, a few years later, white Southerners started restricting that right to vote again.”

Indeed, it took an entire century following the war until the Civil Rights Act of 1964 put a stop to some of these abuses. For a while, that seemed to help. Voting rights were expanded, and many attempts of states to limit access to the ballot box were defeated in court with the help of the federal government.

But those wanting to roll back these new protections never gave up, and, ultimately, they succeeded. In 2013 — notably after the country had elected President Barack Obama, a Black man, twice — the Supreme Court gutted the Civil Rights Act in Shelby County v. Holder.

It is noteworthy that two of the justices in the majority were appointed by George W. Bush, who lost the popular vote but was ultimately elevated to the presidency by the high court.

“It’s almost like a game of dominoes,” said Waxgood. “A contested election leads to the appointment of Supreme Court justices that gut the Civil Rights Act, which leads to new voter suppression laws, which lead to Trump getting elected despite losing the popular vote by an even greater margin. And it all goes downhill from there.”

Royal Historian Sir Aldous Bradbury notes that US democracy was always more frail than it appeared.

“This was a last chance for democracy, but there was no sense of urgency,”

“The Founding Fathers, who can do no wrong in the eyes of many Americans, crafted a system that favoured small rural states over more populous ones and gave them a disproportionate representation in the US Senate,” Bradbury said. “In addition, they afforded the Senate minority extensive rights and devised a system in which it was possible that a candidate with fewer votes could become president. It’s complete madness and only works somewhat if people of character and good faith are elected. But once you put guys like Donald Trump or former Kentucky Sen. Mitch McConnell in charge, a well-meaning system can easily be turned into a democracy killer… and that’s what happened.”

Democrats had one last chance to save democracy in 2021 and 2022 when they controlled the White House and held narrow majorities in both chambers of Congress. Granted, by that time, five of the nine Supreme Court justices were appointed by Republican presidents who had come to power without popular support; those five justices were confirmed by senators who represented far fewer Americans than those who opposed the candidates, and McConnell had mastered his “tyranny of the minority” strategy (as it later came to be known).

Still, following Trump’s unsuccessful coup, there was a brief moment of opportunity. While his base, fed an endless stream of lies, remained in Trump’s corner, the “Grand Old Party” was in disarray, and Republicans in Washington seemed unsure whether to continue to be subservient to the former president.

“This was a last chance for democracy, but there was no sense of urgency,” said Larry Sabato, a former political science professor at the University of Virginia, from his exile in California. “So many of us saw the writing on the wall, but, I suppose, after more than two centuries of democracy, people didn’t really believe it could happen here… until it did.”

Democrats never seized their final opportunity. Citing the need to preserve the sacrosanct “filibuster” — an arcane rule that gave the minority the right to block legislation and presidential nominees — conservative Democrats thwarted efforts to protect the right to vote.

Still, energy magnate Joseph Manchin IV defended the legacy of his father, former Sen. Joe Manchin (D-WV), who passed away last year following a lengthy battle with black lung disease. It was Manchin who primarily stood in the way of filibuster reform together with Kyrsten Sinema, who was then a senator from Arizona and now runs Pfizer.

“Well, at least we got our coal plants back online,” Manchin’s son said.

Here is a brief timeline:

2022: Republicans win back control of Congress thanks to new voter-suppression laws passed in many states following the GOP’s 2020 election loss.

2023: Republicans abolish the filibuster. “Only an idiot would allow the minority to block everything,” McConnell says in a speech to the Federalist Society that was secretly recorded and leaked to the media.

2024: Trump wins the GOP nomination unopposed and becomes president in spite of losing the popular vote by 15 million. Making unspecified claims of “fraud,” Republicans in several states, including Wisconsin, Michigan, Pennsylvania, Arizona, and Georgia, use new laws to overturn the will of the people.

2025: Republicans vote to hold the first-ever “mid-decade census.” They add a citizenship question and, citing “too much violence” in major cities, simply guess the number of residents in several Democratic bastions. As a result, the census finds that only 20,000 people live in Milwaukee, 33,000 in Detroit, and 39,000 in Philadelphia. In the subsequent redistricting round, these cities lose all of their congressional representation. Democrats no longer have any realistic chance of winning back the House of Representatives.

2026: The Supreme Court is expanded to 15 justices to give Trump an extra six nominees. He names former Rep. Madison Cawthorn (R-NC) chief justice.

2027: After the midterm election, the new 300-135 Republican majority in the House passes the “Civil Rights Rectification Act.” It drastically changes voter ID requirements (a copy of The Art of the Deal is now an acceptable form of identification) and disenfranchises large parts of the Democratic base. All early voting and vote-by-mail options are eliminated. Many states close all but one polling place in Democratic strongholds, forcing anyone who wants to vote there to wait in line for hours.

Congress also approves the “Trump Won in 2020 Like He Told You All Along Act,” which voids Joe Biden’s 2020 victory. The law also allows Trump to run for a third term because “he was totally robbed by fraud.” In a 12-3 ruling, the Supreme Court declares that this is not a violation of the 22nd Amendment.

2028: Trump passes away shortly before the election. Instead of elevating running mate Tucker Carlson to the top of the ticket, Don Jr. becomes the nominee.

“Essentially, his name is on the ballot, so this seems easier,” Sidney Powell, the first High Commissioner of Elections, says.

2029: Don Jr. becomes president and legalizes cocaine on his first day. Stating that “My work here is done,” he declares that he will only serve one term and clears the way for his sister’s nomination.

2031: Following the 2030 census, a new round of redistricting results in “extreme gerrymandering” in Ohio, Wisconsin, Michigan, and North Carolina. Anyone living at an address where a Democrat is registered is placed in a single congressional district.

2032: Ahead of the election, the Democratic Party is declared to be “antifa” and outlawed in the 40 GOP-controlled states.

Back to Square One for Former Colonies

Within a decade, Trump and his GOP managed to completely dismantle a democracy that was more than two centuries in the making. Even worse, they did it in plain sight after loudly proclaiming their intentions.

And still nobody stopped them.

“Well, I gotta hand it to the Yanks, they have really done it this time,” said Sir Aldous, the royal historian. “But, honestly, if they didn’t like democracy but loved autocratic, self-dealing families, then they could have just remained a part of the Empire.”