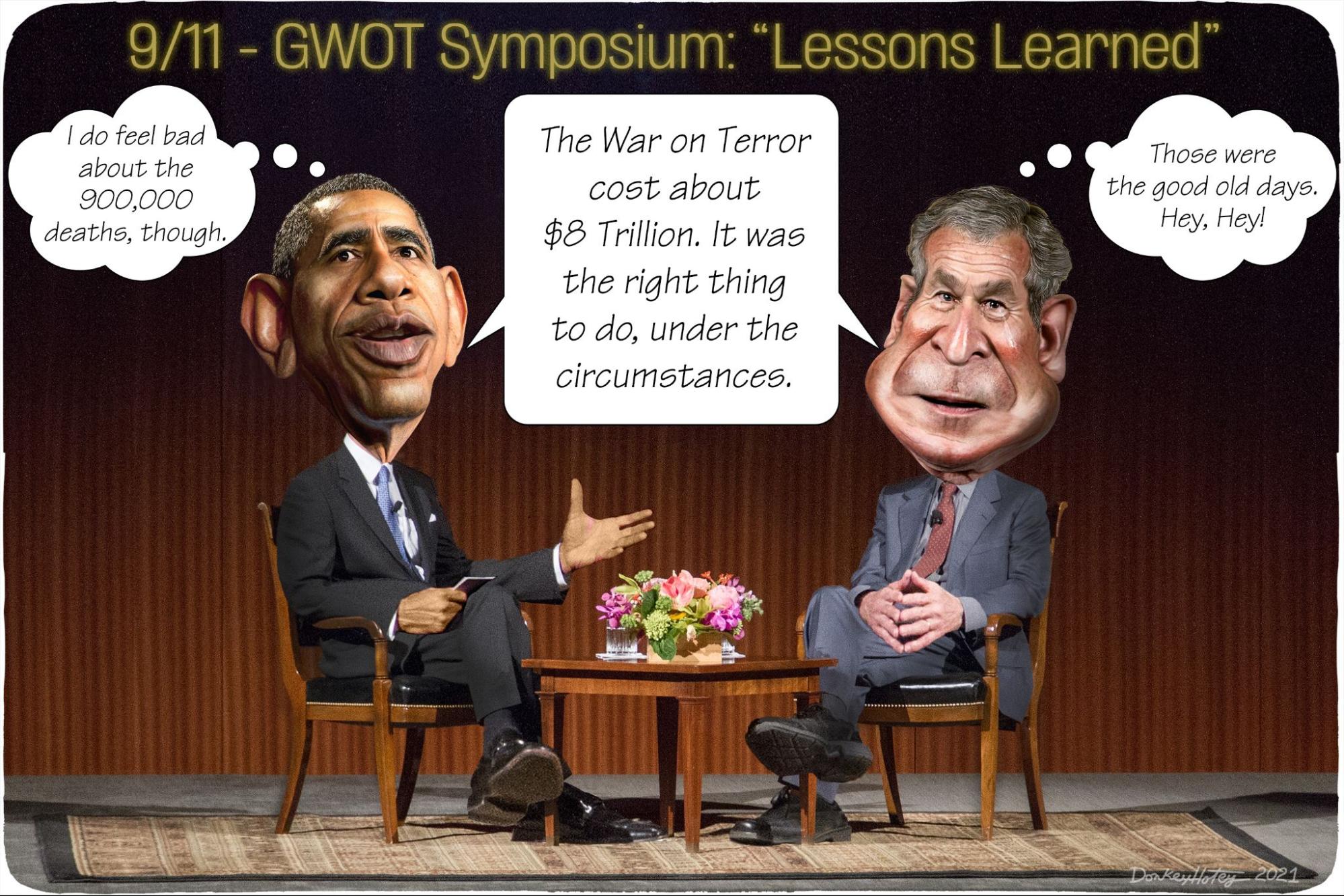 As the sun sets on the US empire. Photo credit: DonkeyHotey / WhoWhatWhy (CC BY-SA 2.0) See complete attribution below.
Cartoon

9/11: The Tragedy of an Opportunity Wasted

There are many ways in which 9/11 was a tragedy. Only some of them will be told in all of the events surrounding the 20th anniversary of the attack — like the tales of heroism Americans enjoy hearing. Others will largely be glossed over — for example how the United States played right into the hands of al-Qaeda with a predictable response that cost many more lives than the attack itself, and created many new terrorists.

One, however, will likely be ignored altogether: It is the tragedy of an opportunity squandered.

For a brief moment, the attack not only united Americans but also brought together much of the global community. The images of a gaping hole in the skyline of New York, probably the most iconic city on the planet, stirred something — perhaps a sense that the world was on the wrong track.

Americans put aside their partisan divisions, which ran deep after the impeachment of Bill Clinton and an election that was controversially decided by the Supreme Court. Less than a year after losing the popular vote, George W. Bush’s approval rating was 92 percent as Americans rallied behind him.

Globally, the Cold War was over, and a number of new countries were dabbling in democracy. At the very least, it was a time of change. And the world cared. Many countries offered either statements of support or material assistance — most famously a tribe in Kenya that sent 14 cows. More than anything, their gift was a symbol of a sense of togetherness following a tragedy.

Within a few months, the US and its “Coalition of the Willing” had done exactly what helps create terrorists in the first place: occupied yet another country and bombed it to smithereens — one wedding at a time.

In that moment, 9/11 could have served as a catalyst for something good. Americans of all stripes and the global community could have turned tragedy into triumph by showing what is possible if we all work together to make this world a better place and tackle the big problems of our time.

Within a few months, the US and its “Coalition of the Willing” had done exactly what helps create terrorists in the first place: occupied yet another country and bombed it to smithereens — one wedding at a time.

But that’s not all. The supposed “good guys” in this conflict were setting up “black sites” across the globe — extrajudicial detention facilities in which the US tortured its prisoners of war. Oops, of course they didn’t do that. My bad.

They weren’t “torturing prisoners of war,” they were using “enhanced interrogation techniques” on “enemy combatants.” I’m sure these semantic nuances made all the difference to those captured on the battlefields… or sometimes grabbed off the streets of allied countries. That wasn’t kidnapping, by the way, that was “extraordinary rendition,” and it’s totally fine because the good guys were doing it.

Each new revelation of these war crimes was a welcome recruitment tool for various terrorist groups who could point to them and say: “See, everything we tell you about the Americans is true.”

Even worse, other countries realized that the easiest way to oppress their domestic undesirables is to label them “terrorists,” using the blueprint the US had created. In no time at all, Russia was fighting its “War on Terror” in Chechnya while China used the same designation to justify its fight against its Uyghur minority. And, because the US had ceded the moral high ground, it had no standing to criticize others for their misdeeds.

However, the post-9/11 goodwill had not just been squandered abroad but also at home. In the name of “fighting terror,” civil liberties were eroded and a bloated security apparatus was created that costs billions of dollars annually to maintain.

It would be easy to solely blame Bush and his neocon cabal for all of this, but that would be wrong. As president, Barack Obama continued — or even expanded — some of these programs. For example, he really took a liking to drone strikes.

Most recently, Donald Trump taught American allies that they cannot count on the US. Otherwise, he spent much of his presidency neglecting foreign policy and instead was busy creating domestic terrorists, which obviously isn’t great either.

In addition, let’s not forget that all of this was done with the enthusiastic support of both parties. The “Authorization for Use of Military Force” and the “Patriot Act” were passed nearly unanimously, and if you watch Bush’s address before a joint session of Congress shortly after the attack, you see that nothing gets lawmakers off their lobbyist-fed asses as quickly as the prospect of waging war against yet another third-world country.

That brings us back to the hidden tragedy of 9/11. In the past, the US has at least tried ( sometimes successfully) to turn its biggest challenges and traumatic events into positives. The American Revolution resulted in the birth of a remarkable experiment in liberty and self-governance; the Civil War ended slavery and (temporarily) gave Black people the right to vote; the Great Depression led to unprecedented social changes; and the attack on Pearl Harbor jolted the US into a war against fascism in Europe and Asia, which achieved its stated mission of defending democracy (at least in the short run).

9/11, however, got us nothing apart from more wars, more dead bodies, more debt, more enemies, and a more divided nation. The only thing we have less of now is freedom.

But at least we showed the Taliban who’s boss.