“You people take death too seriously.”

Those words, from a commander with the Alaska State Troopers, stung Gloria Simeon, but they didn’t surprise her. During her 10 years of coordinating her village’s public safety officer program in rural Alaska, she heard many people dismiss the violence against women sweeping through Native communities, whose members go missing and are murdered at disproportionately high rates.

Often, the offenders come from outside the community: The overwhelming majority of perpetrators of sexual violence against Native women are non-Native.

The 2019 Uniform Crime Report spells out Alaska’s devastating situation. That year, Alaska Natives made up 37 percent of murder victims but only 15 percent of Alaska’s total population. They were targets of felony sex offenses in even higher numbers. Alaska has the highest per capita rate of forcible sexual assault in the country at 3.5 times the national average, and almost twice the country’s murder rate.

The National Institute of Justice reports that more than four in five Native women across the US have experienced violence in their lifetime, with murder rates in some counties soaring to 10 times the national average.

Simeon is now one of the tribal representatives working with a federally sponsored task force based in Anchorage to combat the violence in Alaska Native communities. “Outside of the fact that I’m not missing and murdered, I’m every Native woman that has suffered violence, abuse, trauma, substance abuse and recovery, and survival,” Simeon testified during a briefing on the task force’s upcoming plans before the Anchorage Public Safety Committee.

As of last week, the task force started moving into Native communities to work directly with locals and develop a Tribal Community Response Plan (TCRP) addressing the crisis. The goal is to strengthen community outreach through services that already serve locals, coordinate law enforcement and victim services, and make sure that families are kept in the loop about what is being done to help missing loved ones.

Over the coming month, four tribes in four areas — southwest Alaska, the interior, Bristol Bay, and the Southeast — will work with the task force to draft response plans. Each tribe will bring its own needs to the table.

Perhaps most revealing of Alaska’s unique challenges is that response plans can be tailored to communities that have no local law enforcement at all.

With their numbers stretched thin over an unaccommodating landscape, state troopers must travel by boat or plane to reach emergencies in rural towns. Usually, village public safety officers are meant to step in as first responders in places outside the state’s reach, but their numbers have plunged to an all-time low, due to a lack of resources and the emotional burden of having to investigate violence committed against their own families and friends.

To make matters worse, jurisdictional limitations tend to tie the hands of public safety officers, causing delays in securing crime scenes when a timely response is crucial. “They had to do the best they could with what limited resources they had to secure victims, secure perpetrators, and then wait — and wait and wait until the troopers came to provide backup,” Simeon pointed out.

By 2019, only 38 public safety officers were scattered among the more than 240 villages throughout rural Alaska. Many other officers opted for the higher pay and better working conditions offered by larger towns, leaving an estimated 1 out of 3 rural villages without any trained local police to speak of. Little seems to have changed since the 1970s, when the village public safety officers were first deployed. At that time, Alaska’s Department of Public Safety noted, “It is safe to assume that no group of Caucasian communities would tolerate similar circumstances, and that they would demand equal protection under the law.” 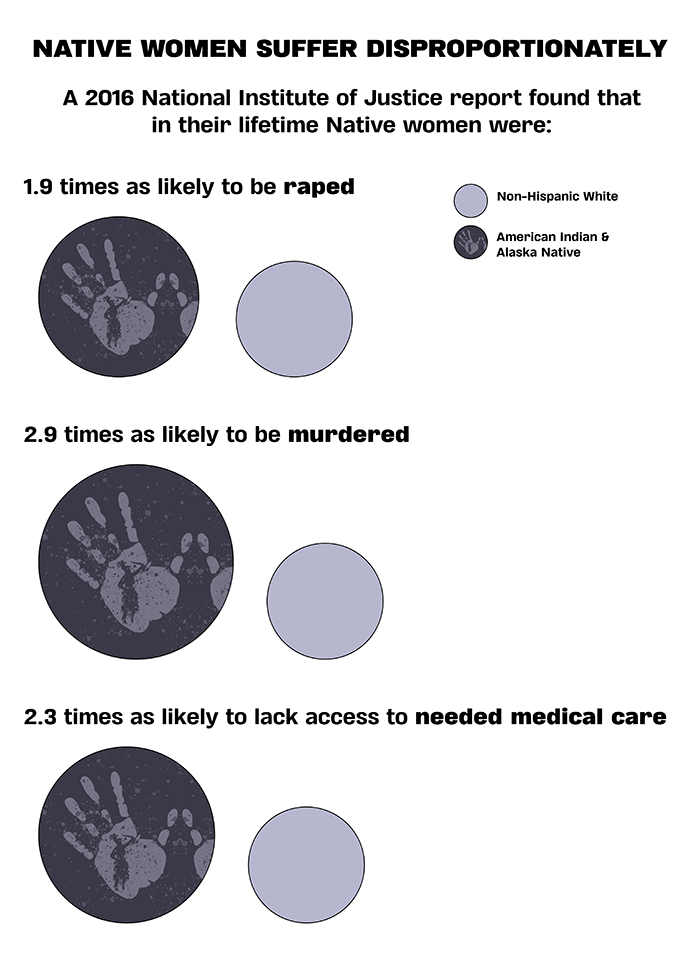 On its face, the lack of law enforcement suggests an obvious solution, one that the MMIP task force is already pursuing. The task force is partnering with the US Marshals Service and the US Coast Guard to pool personnel and heavy machinery so that utility aircraft, amphibious airboats, snow machines, and helicopters are at the ready. This approach, however, may be hampered by the mistrust of state police that exists in Native communities after decades of neglect.

Only recently did the Anchorage Public Safety Advisory Commission find fault with the city police department’s cultural awareness training and express a need to make sure that training doesn’t reinforce stereotypes already prevalent in local communities. “Stereotypes, though people think it’s just ideas about people, we know that those turn into actions and behaviors,” a commission member said.

As a first step to rebuilding trust, the MMIP task force is urging tribal health care providers to make sure that missing person cases are reported immediately, not after the 48 to 72 hours many families have been told to wait before reporting.

“If we can build trust and relationships so that all our people across Alaska are calling 911 as soon as they believe there’s a missing person so that we can get a response as quickly as possible, that is the message that I want to be heard the loudest,” said Cumberlidge.

As a second step, the task force is working to close information gaps within and across missing person databases. Records on the municipal, state, and federal level don’t yet match, and as a result, law enforcement groups navigating different jurisdictions are isolated from each other — and from families desperate to know how a case is progressing. The resulting radio silence often drives families to start grassroots movements or turn to social media to investigate cases themselves. 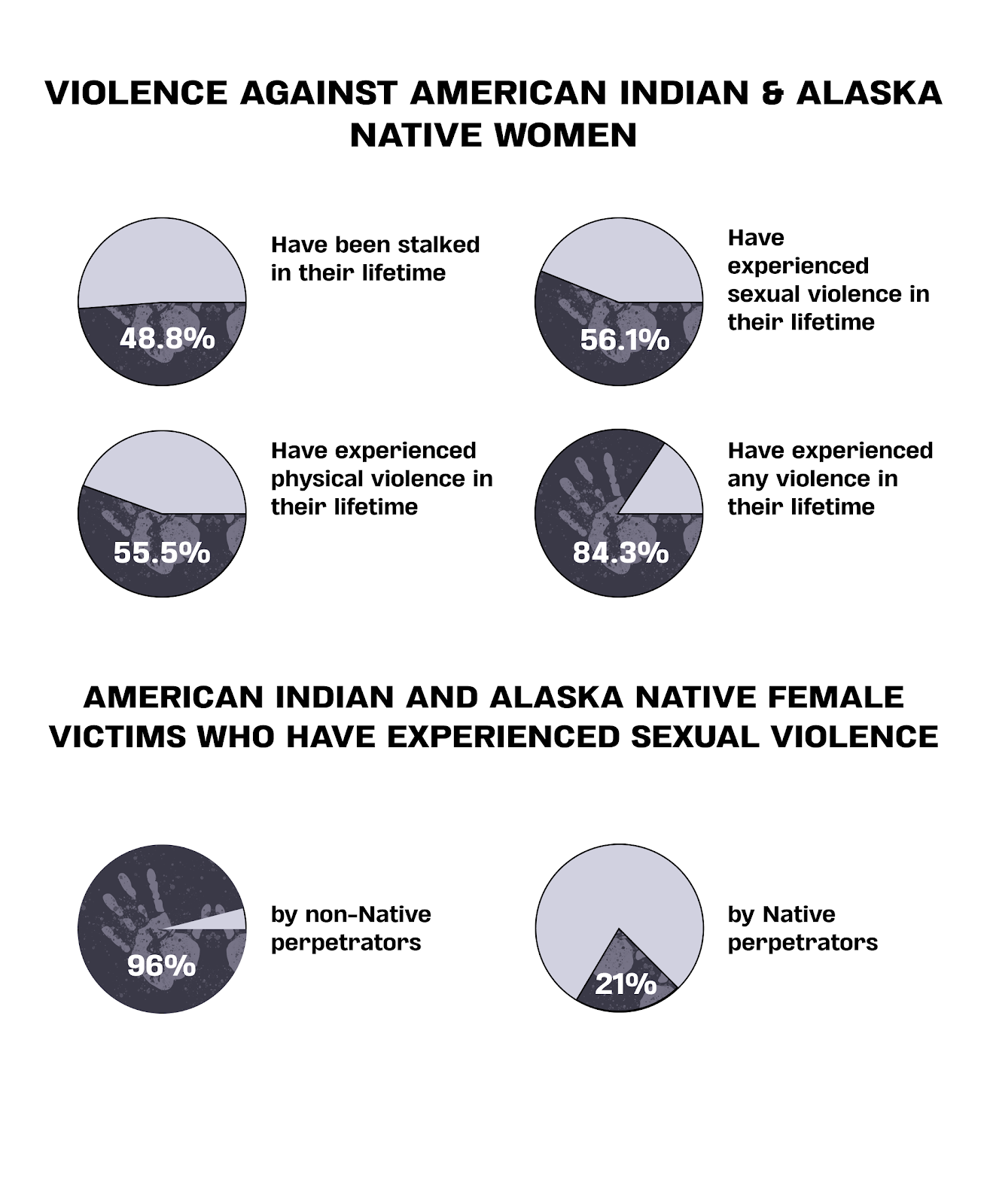 “This work is just beginning,” said Cumberlidge of the efforts to improve data, but one aim is to standardize language across platforms to correctly identify race and tribal affiliations. Racial misclassification of Alaska Natives is common in the healthcare field and on death certificates in particular. Forms may not always offer the proper box to mark a patient’s race accurately, leading many to be classified as the nondescript “Other.” Even the cause of death jotted down may be inaccurate.

“That’s another thing: Some folks who have ended up dead, their death has been characterized as suicide or accidental or natural causes when in fact they’ve been murdered,” explained Debra O’Gara, a lawyer, former judge, and senior policy specialist at the Alaska Native Women’s Resource Center. O’Gara and others at the center are now working with the MMIP task force.

To illustrate just how deep negligence in treating Native victims of violence can go, O’Gara cites a recent incident in the Alaskan city of Nome. Three nonprofit organizations donated $38,000 to have rape kits processed at a private lab rather than relying on the state crime lab to chip away at the backlog of kits sitting in storage over decades. Ideally, these kits each contain DNA samples of the victim and the perpetrator and can help solve the crime.

Stories like O’Gara’s are repeated across the entire state, which — starting in 2016 — took three years to test the first 700 of more than 3,600 kits that had gone unprocessed since the 1980s. The effort led to a single prosecution, in part because some local police and state troopers had failed to collect DNA samples from people arrested for felonies as mandated by law.

“Once we are able to actually get some reliable data then we’ll have a better sense of exactly how big this problem really is,” said O’Gara.

Apart from consulting state and federal clearinghouses for missing persons, the organization is uncovering details of cold cases via Freedom of Information Act requests, following up on social media posts about the missing, and scouring media reports to resolve inconsistencies between publicly circulated accounts and those made by families in private. Through casting their net wide, the organization strives to safekeep accounts of victims that would otherwise go unheard.

Apok and her group want to emphasize that underneath all the data there are humans whose stories often don’t make it into state or federal records. A portfolio of photos and family trees is part of Apok’s database, alongside a history of where victims are from and their tribal names. Such accounts are integral to Native culture. Families may offer these details at vigils Apok organizes to bring locals together and share food, make traditional music, or craft beaded ornaments.

“We do this work from a healing-centered place, and make sure that we’re caring for one another in this work before demanding justice and before we ask our community to take steps forward together,” Apok explained.

O’Gara agrees with Apok’s mission of encouraging Native communities to take matters into their own hands as much as possible, whether by patching up data gaps, seeking out victim services, running education campaigns, or solving tribal disputes. These actions are meant to complement the task force’s emphasis on improving law enforcement response.

All the while, O’Gara stresses that each tribe’s involvement will look different: “Each of us are separate nations with our own separate priorities and concerns and customs and history. Our potential allies and partners need to slow down long enough to realize that each community is different with its own set of problems, and we start from there and build from there.”

Organizations like Data for Indigenous Justice and the Alaska Native Women’s Resource Center shine a light on the break between culturally distant worlds — be it a rural-urban divide or a disconnect between western and Indigenous societies — that the task force’s Tribal Community Response Plans will have to bridge.

“A person who dies in Hooper Bay has relatives clear across this region that go all the way to Kalskag,” Simeon said. “Somebody from Sleetmute is related to somebody in Chefornak. Somebody at the mouth of the Yukon is related to somebody almost clear to Bristol Bay. We are all related to each other in some way or another.” Simeon paused and reflected for a moment. “And yes, we do take death seriously, because it’s someone we know or someone we’re related to. And I don’t know where Western society lost those connections, but we still have them and we honor them.”