Polls closed on the east coast with surprisingly few election disruptions across the country. Those issues that did arise were handled swiftly.

The most common problems at polling stations were associated with poll book failures, said Susannah Goodman, director of election security for Common Cause. In Ohio, KnowInk poll books did not have enough cloud space to download updated voter registration lists Monday night, but printed voter lists enabled poll workers to circumvent the problem.

Several states lacked paper ballots in precincts where electronic voting machines malfunctioned. Some jurisdictions that experienced technical problems or delayed openings of polling stations were granted extensions to allow voters more time to vote. In North Carolina, the state Board of Elections extended poll hours for two precincts in Sampson County and one each in Guilford and Cabarrus counties. In Georgia, several counties extended voting by an hour, and Texas had to extend voting by an hour in two counties.

Goodman emphasized that the problems with election equipment were not connected to hacking. She added that “this is going to be a long election period.”

“Overall, this has been a pretty smooth Election Day,” said Karen Hobert Flynn, president of Common Cause.

Few Complaints Throughout the Day

Despite concerns about widespread issues leading up to the 2020 election, voting-rights groups appeared surprised throughout the day about the apparent lack of problems in most states. Kristen Clarke, president and executive director of the Lawyers’ Committee for Civil Rights Under Law, said that voting issues were sporadic. 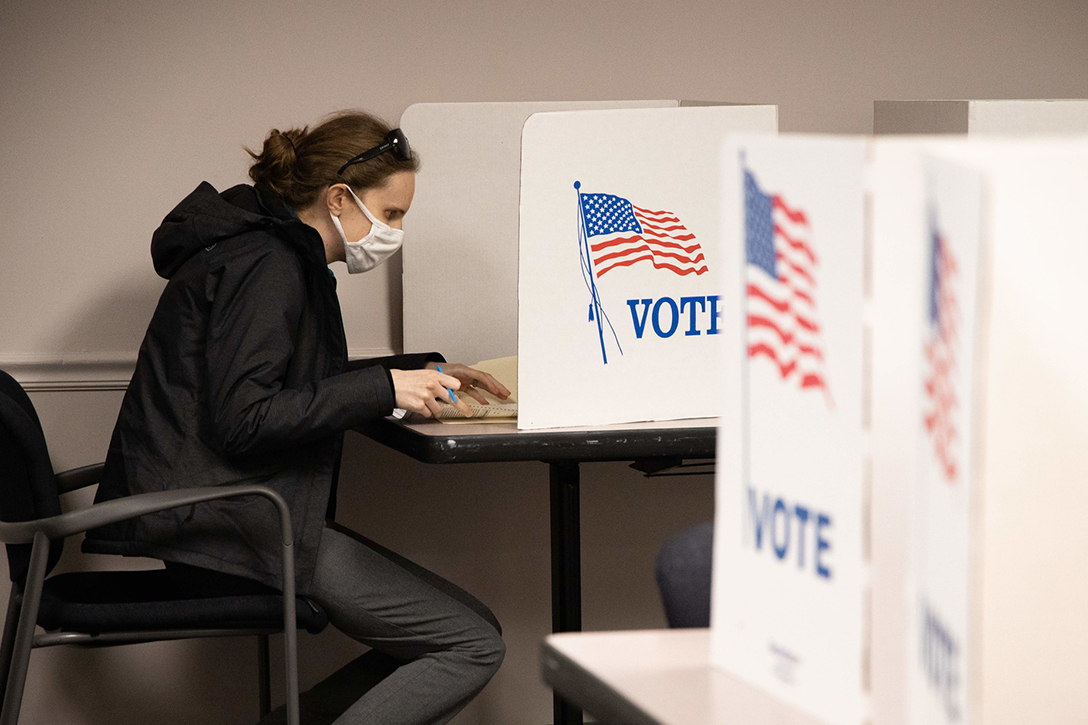 Most of the complaints came from voters in Pennsylvania, Florida, New York, and Michigan. Voters alerted Clarke’s group to instances of voter intimidation and misinformation about voter ID requirements. In Florida, Clarke added, some voters were given false information by poll workers about provisional voting.

Jonathan Mehta Stein, executive director of Common Cause California, said that the Democratic-leaning Riverside County saw wait lines up to two hours in several cities due to technology glitches. Stein added that there had been more aggressive electioneering outside polling stations than in previous elections across the state.

“It’s so loud in some instances that they’re able to disrupt voting inside the voting site,” Stein said, adding that some voters refused to remove clothing or accessories that showed clear support for a specific candidate.

Other voters reported confusion about where to vote. In Kenosha, WI, two adjacent polling places — both of which are museums — had unclear signs placed outside. In Milwaukee, more than 50 voters arrived at the Mitchell Street Library and learned that it was only an early voting site.

The Battle Over Counting Ballots Continues

Despite the generally positive reactions, legal battles in several battleground states are now underway regarding absentee ballot processing. The Nevada Republican Party and the Trump campaign filed an emergency motion before the state Supreme Court to stop mail ballots from being counted in Clark County.

In Pennsylvania, Republican Congressional candidate Kathy Barnette filed a federal lawsuit against the Montgomery County Board of Elections, alleging that the board violated Pennsylvania’s election code by inspecting ballots early. Barnette’s motion was granted by a federal judge, temporarily holding off the counting of the mail-in ballots.

The US Postal Service also took the extraordinary step of ignoring a federal court order to conduct sweeps in a dozen postal districts to ensure all absentee ballots are delivered. A federal judge issued the order after learning that more than 300,000 ballots were not found.

Polls may be starting to close across the country, but the 2020 election is far from over. Legal fights over how long absentee ballots can be accepted and which ballots can be counted are likely to be decided throughout the week. All of this, however, must be done before the Electoral College meets on December 14.