November is less than four months away, and it is expected that a record number of voters will mail in their ballots. Whether the US Postal Service, strapped for cash, can deliver those ballots in time to be counted is less than certain.

Inscribed in granite above the James A. Farley Post Office in New York City is the unofficial motto of the USPS: “Neither snow nor rain nor heat nor gloom of night stays these couriers from the swift completion of their appointed rounds.” Budget shortfalls, however, may prove to be more troublesome than inclement weather as fewer Americans use the Postal Service and recent attacks levied by the White House suggest that it is doubtful a bail-out is imminent for the hard-pressed agency.

Such doubts only increased after Louis DeJoy, the new postmaster general, laid out plans to delay mail service in order to cut costs.

House Democrats sent a letter to DeJoy on Monday demanding answers about the reported delay. Rep. Carolyn Maloney (D-NY), chair of the House Committee on Oversight and Reform, wrote that such a delay “would impair the ability of ballots to be received and counted in a timely manner — an unacceptable outcome for a free and fair election.”

Lawmakers on the Senate Committee for Rules and Administration questioned election officials and voting experts on Wednesday about how much time it takes for ballots to make their way through the Postal Service. In St. Louis County, MO, Republican Director of Elections Rick Stream said that mail delivery times “are less than optimal, for sure.”

Stream added that his office has offered — without success — to send a staff member to the local postal office to help process ballots. 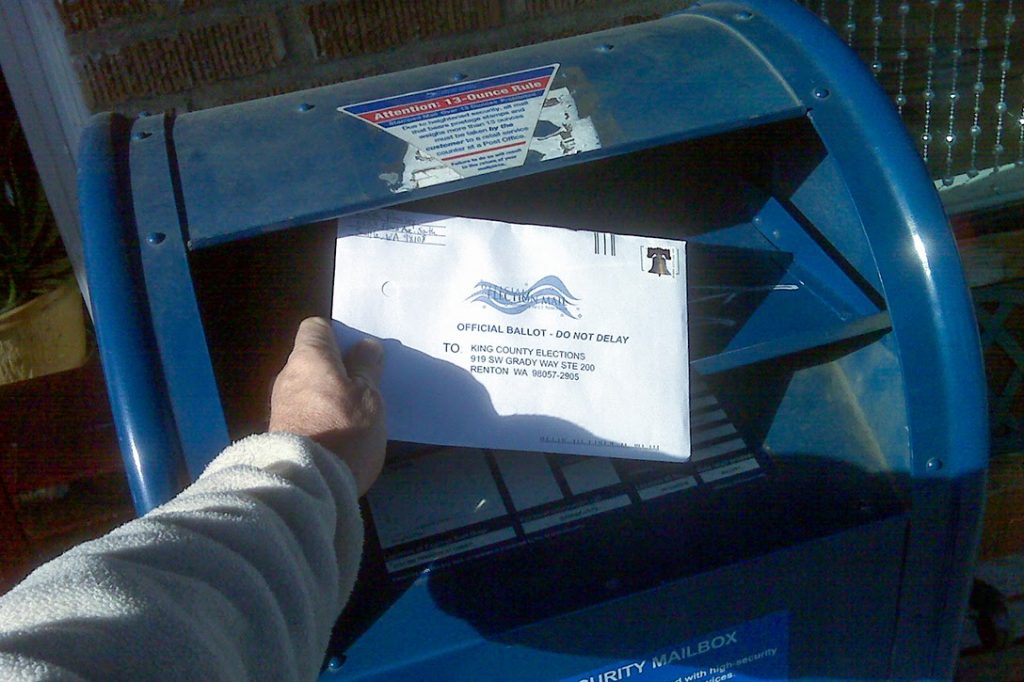 Sen. Angus King (I-ME) said during the hearing that USPS is facing “imminent insolvency” and Congress must act now to ensure all absentee ballots are counted.

“We can’t just skirt around the issue of the importance of the post office because the president doesn’t like their package rates,” King said.

Vanita Gupta, president and CEO of the Leadership Conference on Civil and Human Rights, argued, in a letter to the Senate Rules Committee, that automatically mailing absentee ballots and pre-paid postage must be part of the solution. Gupta cited administrative failures in several states’ primary elections, including swing states like Wisconsin and Pennsylvania.

“One county official called the primary ‘chaos,’ and another said there was ‘no way humanly possible’ to keep up with the flood of absentee ballot requests,” Gupta wrote.

Kristen Clarke, president and executive director of the Lawyers’ Committee For Civil Rights Under Law, told the Senate Rules Committee that the Postal Service needs roughly $89 billion because it will play a “central role” in the 2020 election. Sen. Amy Klobuchar (D-MN), the committee’s ranking member, noted that funding for the USPS was included in the House-passed HEROES Act.

A recent report by the R Street Institute, a conservative think tank, claimed that without adequate funding, “mail service would likely stop and this would be a disaster for any election that relies on vote by mail.”

The Postal Service estimated at the onset of the coronavirus pandemic that it would need $75 billion to operate throughout the rest of the year. But the USPS is not necessarily in such a vulnerable position at this point because the actual loss in revenue was not as severe as initial projections, said Nick Zaiac, the report’s author.

“The Postal Service, right now, is more or less on the same trajectory it was … but it has not faced the absolute catastrophe that was thrown around at the beginning [of the pandemic],” Zaiac told WhoWhatWhy.

If the USPS decides to delay certain delivery services, especially as a result of local outbreaks of the coronavirus, there are several ways that voters can ensure their ballots are returned in a timely manner.

Prior to receiving their ballot, voters should do their research on the candidates and issues and be prepared to return their ballot quickly, Zaiac suggested.

“Don’t wait until the day before Election Day,” he said.

Another option is for voters to personally deliver their ballots to their local ballot drop-off location. This option eases the burden on the Postal Service, especially where there are localized coronavirus outbreaks.

Local election officials are also preparing drop-off boxes at in-person polling locations for use by voters who cannot return their ballots before Election Day.

“Any way that a state is allowing people to return ballots outside the postal stream is going to take pressure off the USPS to make sure that it does its job,” Zaiac said.