The word “unprecedented” has been tossed around a lot in the last few years, especially among left-leaning talking heads discussing anything that comes out of the Oval Office. More recently, the term has been adopted by conservatives: the Trump administration has taken “unprecedented” steps in response to COVID-19 and organized the purchase of an “unprecedented” amount of personal protective equipment (PPE), and the president took swift, “unprecedented” action in setting travel bans. And both sides would concur that the president was “unprecedented” in suggesting injecting cleaning products into your system.

A truly unprecedented development this Juneteenth — a celebration of the day the last freed slaves learned they had been emancipated — is the emergence of a sustained, collaborative, and consistently visible social movement in regard to the mistreatment of Black Americans. Past efforts have lost steam and media coverage, but this iteration of Black Lives Matter looks to have staying power. Public demands are forcing legislative discussions around concrete reform, and some proposed programs have quantifiable traction.

Over the last few days, there has been significant media buzz around the California Assembly’s passage of a bill establishing a team to develop official options for statewide reparations for African American Californians. Authored by state Assemblywoman Shirley Weber (D), the bill passed with overwhelming bipartisan support. If the bill passes the California Senate and is signed by Gov. Gavin Newsom (D), it will be the first of its kind on government record.

Reparations for crimes against Black Americans have been implemented only in very specific cases. Florida was the first state to pass any sort of reparation legislation. In 1994, the Sunshine State set aside $2 million for survivors of the 1923 Rosewood Massacre. And in 2015, the Chicago city government traced the relatives of victims of police brutality from 1970 to 1990, and split a $5.5 million fund among them. The program also directed funds to the design and construction of a memorial site and established the Chicago Torture Justice Center.

In 2019, Georgetown University adopted a student-led initiative for a slight hike in tuition to raise money for reparations. The fund is designated for the descendants of 272 slaves sold to ensure the school’s financial stability in 1838. The school also claims to give admissions preference to descendents of those slaves. Other private institutions seek to follow Georgetown’s lead by inspecting their past relationships with the slave trade and considering reparations based on the scope of involvement. 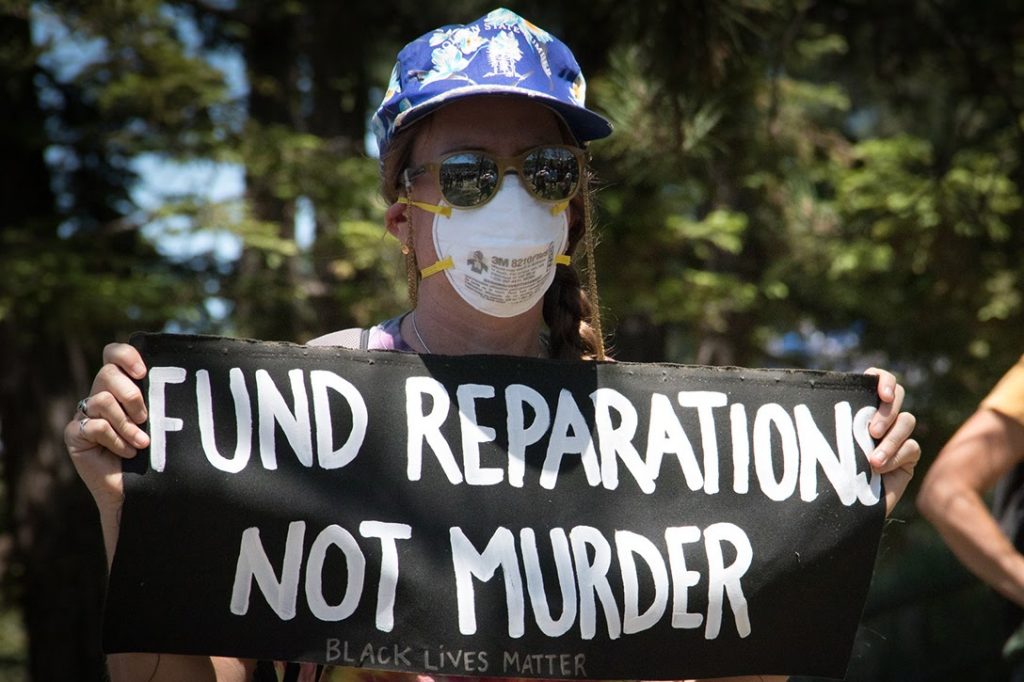 In the past, the idea of large-scale federal reparations has not garnered enough support from the general public for them to be pursued — they have been called “impractical” or “too difficult to implement.”

Based on polls taken last year, just 16 percent of white Americans are in favor of reparations, while 73 percent of African Americans are in support. Current polls show registered Democrats split, with 49 percent in favor, 47 percent against, and 4 percent undecided/unresponsive. Republicans are staunchly opposed, with 92 percent against. Registered independents are opposed by a margin of 33 percent.

The movement has historically faced significant opposition in Congress on both sides of the aisle, due to ideological differences and a host of presumed difficulties including issues with implementation and public cost. Former presidential candidate Sen. Bernie Sanders (I-VT) has pointed out that it is hard to gain support for reparations if they are not more clearly defined.

Now, due to the continued pressure from Black Lives Matter protesters, elected officials are revisiting the topic. There are roughly three schools of thought as to how these initiatives may practically materialize:

The first two options seem most plausible. Through the CARES Act, the US government took the “unprecedented” action of putting money directly into people’s pockets due to the COVID-19 pandemic lockdown, something neither politicians nor regular citizens had previously imagined to be in the scope of possibility. Over the years, the third option has lost traction, becoming more of a symbolic point the last few times reparations entered the political zeitgeist.

Robert Johnson, the founder of Black Entertainment Network (BET), recently called for $14 trillion in reparation for slavery. It’s unclear how he arrived at that number, but despite at first look seeming staggering, there is logic to it. The 2018 US Census data shows nearly 50 million of 327 million American citizens are Black. A $14 trillion dollar reparations bill would provide every Black American less than $300,000, which would have to be adjusted for population growth since 2018. The median net worth of a Black family in America in 2016 was $17,150, compared to the median net worth of a white family of 10 times that amount, a disparity attributable to generational poverty born of slavery and discimination. Reparations advocates argue that for a generational issue, you need a generational solution, and with that in mind, $300,000 looks more than reasonable.

Economic and community development has long been considered the most viable option, and has been implemented with varying and limited success. This strategy would inject government money into Black neighborhoods that are underrepresented and underserved, with the goal of bringing living conditions, education, and public and private services up to the standards of typical middle class communities. Unfortunately, this solution requires faith that US, state, and local governments — as well as development contractors and other reformers — would uphold this agreement, an ideal that has not been realized in prior efforts.

Historically, corruption — and even allegations of corruption — has often thwarted the purposes of economic development programs. One case in point is the $6.7 million theft of economic development project funds over six years by a bureaucrat in Montgomery County, Maryland. In 2019 $8 billion for urgent projects related to hurricane relief in Puerto Rico were halted based on US Department of Housing and Urban Development Secretary Ben Carson’s allegations of “prior mismanagement of funds.”

It’s hard to say where the federal government will stand next Juneteenth. Although Trump touts his “unprecedented” accomplishments for the African American community, these reforms don’t even remotely comport with the Republican Party platform. They do fit more closely with evolving Democratic Party goals, but there is no guarantee that even a Democratic White House and Congress would or could get it done.