In Greenville, MS, not long ago, workers at a commercial laundry were told to stay put when the plant floor was flooded. They were ordered to keep working, with plastic bags around their feet, standing in water, folding linens that came in from area hospitals. “They were unmasked, ungloved, unprotected. Over and over again this is what we’re seeing … in these Jim Crow jobs,” said labor activist Jaribu Hill.

Black Americans are more likely to work in low-paid jobs as “essential workers,” often without adequate protection. That is one of the factors contributing to the connection between racism and COVID-19, a state of affairs addressed by a series of stunning economic statistics released this week by the Economic Policy Institute (EPI).

To date, the pandemic has left an estimated 36 million workers unemployed. It has infected more than one million Americans, and killed more than 100,000. But its effects have been felt differently across racial lines.

Generations of black Americans have lagged behind their white peers in access to education, employment, wages, and healthcare. And those disparities have increased the burden of COVID-19 on black families.

EPI reports are full of facts, not emotion. But this study was released just days after George Floyd, a black man in Minneapolis, died under the knee of a white police officer. Throughout the country, protests erupted, with some incidents of looting and property destruction, often met with massive force from the police. On Monday, President Donald Trump called in active duty military police to be at the ready to quell unrest in Washington, DC.

In her introduction to the report, Naomi Walker, director of EPI’s Economic Analysis and Research Network, put its data into a much larger context. “We come to this discussion … with both a heavy heart and righteous indignation about the structural racism woven into systems and policies in this country,” she said. “From the treatment of essential workers, the majority of whom are black or brown, to the woman in Central Park who used the power of her whiteness to threaten the safety of a black birdwatcher … to the chilling calm exhibited by the Minneapolis police officer who extinguished George Floyd’s life … black people in this country face physical and economic violence every day.”

The report itself focused on the economic and health impacts of the pandemic on black Americans, but, in keeping with Walker’s opening comments, the subsequent discussion circled back to a much wider interrogation of racism and its consequences. 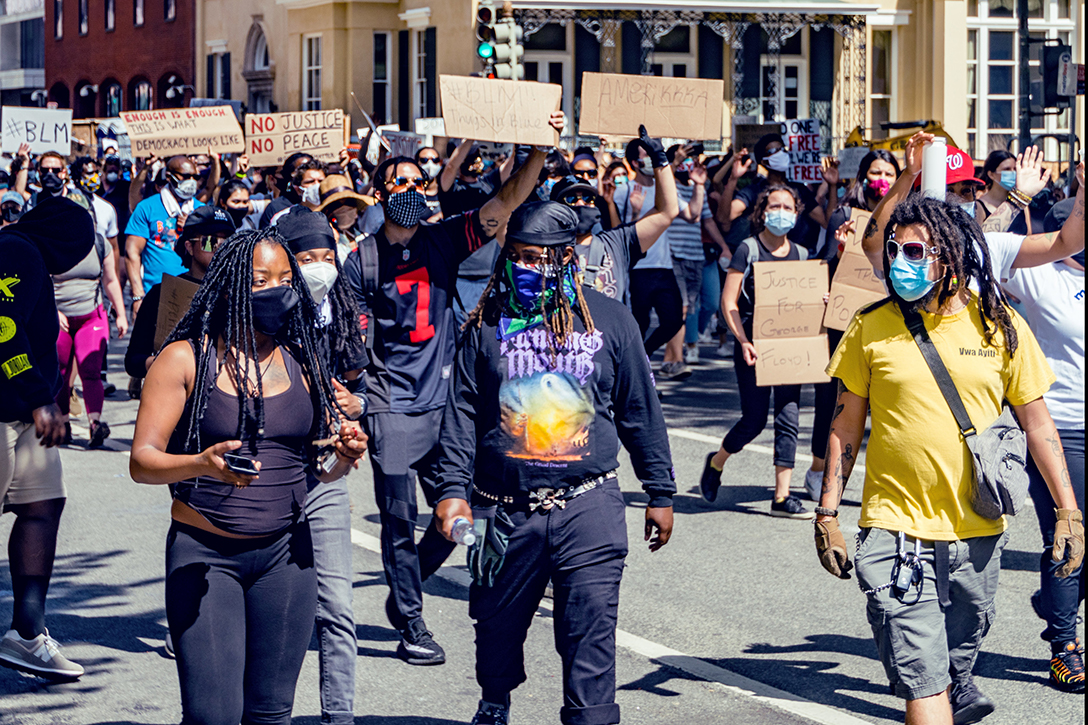 “What we’re really talking about is the devaluation and disposability of black lives,” said Anne Price, president of the Insight Center for Community Economic Development. “The convergence of police brutality — of policing black bodies — and the negligence that we’ve seen in terms of COVID and black people.”

The pandemic may be a “once-in-a-lifetime experience,” but its “economic impact and health consequences” for African Americans are “not shocking or surprising,” said Valerie Wilson, co-author of the report. Racism and economic inequality are the most “lethal preexisting conditions,” Wilson said.

In every area of American life, the report documents, black families rank below white families.

Even in February, when the US economy was healthy, black unemployment — at just under 6 percent — was about double the white jobless rate. By April, when millions of workers lost their jobs due to temporary shutdowns, about 12.8 percent of white men were unemployed, while more than 16 percent of black men were jobless.

Nevertheless, the black workers who remained on the job often were at greater risk than many white employees. While they make up a little less than 12 percent of the US workforce, they constitute 17 percent of the “essential workers” pool, many of them not in the higher paid positions of doctors and nurses, but as support employees, like nurses’ aides, and grocery, transit, trucking, warehouse, and postal workers, Wilson said. 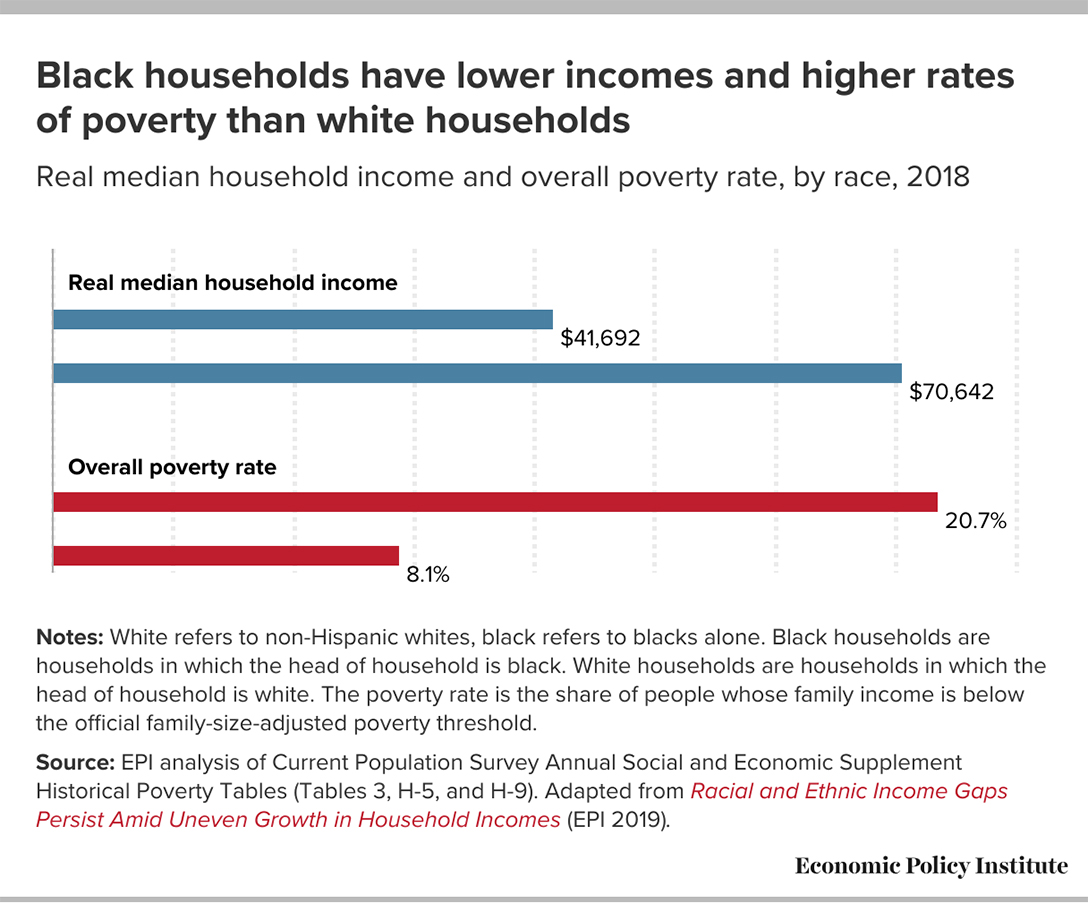 Perhaps it’s not surprising that African Americans, who make up 12.5 percent of the US population, comprise nearly double that figure — more than 22 percent — of COVID-19 deaths.

And historically, black workers have earned significantly less than their white counterparts. “The black and white wage gap is large and persistent,” Wilson said, noting that on average, for every dollar a white worker earns, a black worker earns 73 cents. That wage disparity, Wilson added, is true for every level of education.

In 2018, the median annual income of black families was less than $42,000, just a little over half of that for the families of white workers, whose median income was more than $70,000.

The so-called wealth gap between blacks and whites is even larger, Wilson said. When it comes to having cash reserves to draw on during an emergency, black families have, on average, less  than $9,000 while white families have nearly $50,000. 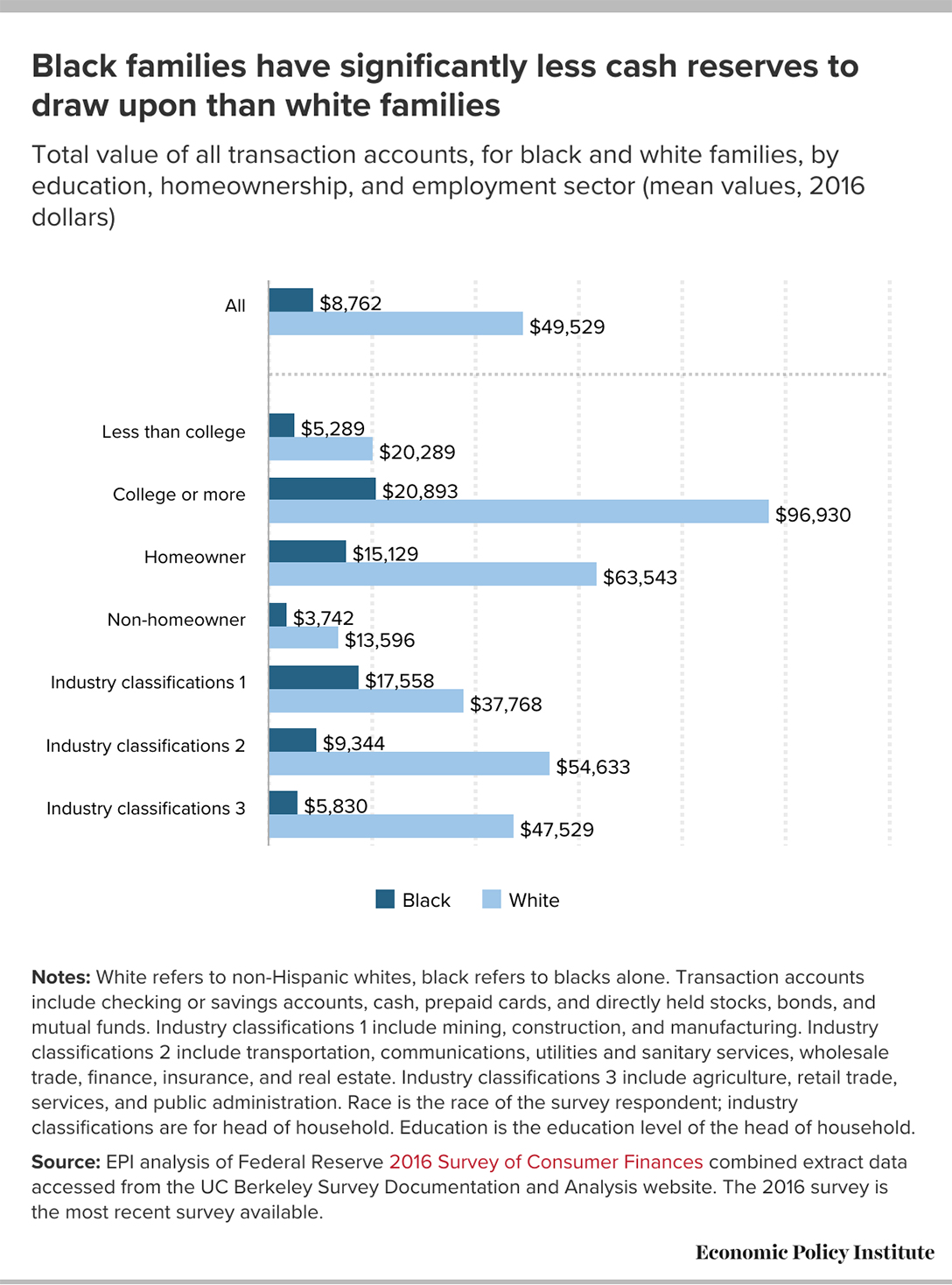 EPI convened a panel of six women of color — five of them African American — to comment on these findings.

The women were not surprised at the numbers, but they saw something deeper than dollars and cents. And they spoke out about the inequities that made the economic stability of black women particularly precarious.

Rhonda Sharpe, president of the Women’s Institute for Science, Equity and Race, said that the term “essential workers,” when applied to African Americans, was really a misnomer. The workers aren’t essential, she charged. They may hold essential jobs, but “the workers are expendable.” If they weren’t expendable, she said, they would have been better protected.

Economist Julianne Malveaux agreed, stating that African American women workers are often CNAs — certified nursing assistants. “We’re seeing the critical nature of [their] work” now, but “always we’ve devalued it … We need those women to get hazard pay, have PPEs.”

“Most workers have never been organized,” added Hill, who founded the Mississippi Workers’ Center for Human Rights. She said that, in the South in particular, unionization is rare. Many workers in big box companies are hired through agencies and classified as temporary workers. Big box companies such as Walmart, she charged, “shamefully use temps as their primary workforce.”

She wants to reopen the discussion about requiring that workers be paid a living wage: “We need hard-core legislation that addresses disparities instead of putting a Band-Aid over it.”

Will Economic Inequality Bring Down Our Entire System of Government?

But the economic discussion kept circling around to the larger devaluation of black people in this country, and the conviction that policies to address inequality must be “black-centered,” not “race neutral.”

“There’s no such thing as race neutrality,” Malveaux said. “When you give people with a lot of money another tax break, [and] black folks don’t have a lot of money, that essentially has a racial impact.”

“Any time a public policy is implemented,” she insisted, it has an impact on black people: “People have avoided the data [about the severity of black-white disparities] because the data tells a story.” A story whose stark message has only been highlighted by the ravages of COVID-19.