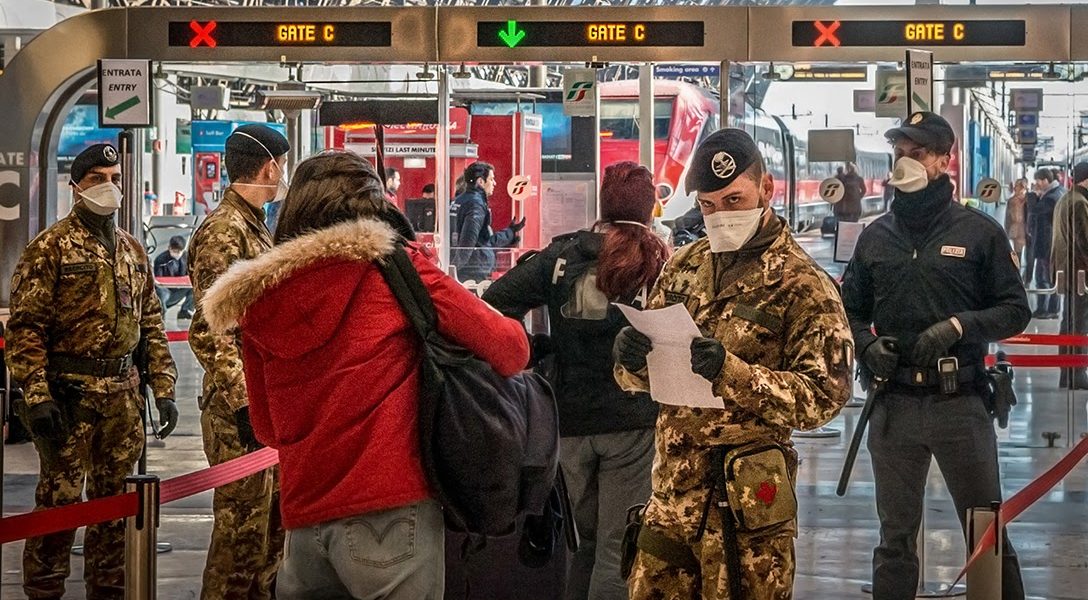 Italy has imposed unprecedented restrictions on its population to control the virus outbreak. Will the US resort to similar measures? Photo credit: © Fotogramma/Abaca via ZUMA Press
Government Integrity Health & Medicine Rights & Liberties

Chances are you don’t remember Kaci Hickox, but in 2014 she was a household name. Back then, when the world was gripped by fear of another aggressive virus — in this case the deadly Ebola disease — she was an American nurse who went to Sierra Leone to treat the sick. Her return to the US made headlines, caused her to clash with two governors, and eventually led to her vindication by the courts, a victory celebrated by civil libertarians. But Hickox’s story might have a far different ending today, as the country contends with not only the coronavirus pandemic but also a far more conservative judiciary.

When she returned to the US, Hickox did not have Ebola, a disease that is not airborne and is transferred only through contact with an infected person’s bodily fluids.

Nevertheless, two states imposed quarantines on her. New Jersey Gov. Chris Christie (R) made her sleep in a tent for three days before letting her leave New Jersey, where her plane had landed, and return to her home in Maine. Hickox had some choice words for Christie, then considered a presidential prospect. “Politicians who tell lies,” she told the Guardian, “will hopefully never make it to the White House.”

However, once she returned to Maine, another governor, Paul LePage (R), ordered that she be quarantined in her home until the 21-day incubation period for the disease had ended.

Hickox sued, contending that there was no scientific basis for such drastic measures. Judge Charles La Verdiere, chief justice for the Maine District Court, agreed. The isolation order was withdrawn.

In his decision, he wrote: “The court is fully aware of the misconceptions, misinformation, bad science and bad information being spread from shore to shore in our country” about the Ebola epidemic. But he added that whether misplaced or not, the fear “is real,” and directed Hickox to allow the state to continue to assess her health status to help assuage the public’s “not entirely rational” anxiety.

Fast forward to 2020. Legal experts aren’t so sure whether the courts, so crucial in protecting Hickox’s civil liberties, will be the bulwark they were just six years ago. At a March 6 webinar sponsored by the American Constitution Society, law professors Michele Goodwin and Stephen Vladek discussed government power during a health crisis.

Congrats to Maine nurse Kaci Hickox and the other Ebola Fighters on being honored as TIME's People of the Year pic.twitter.com/QoK7Pta5I6

“Courts matter” in achieving a balance between protecting public health and respecting civil liberties, said Goodwin. In the Hickox case, she observed, the Ebola crisis had become politicized, and the court ruled that the state had not proven its case that she was a public health threat.

But civil liberties advocates have less faith in the courts under the present administration, she added: “Let’s be clear. The terminology being used in many quarters is that the President has stacked the court,” said Goodwin, who directs the Center for Biotechnology and Global Health Policy at the University of California, Irvine. There are concerns about the influence of “political expediency” on the independence of judges, and whether they can be counted on to rely “on the evidence at hand,” she said.

Given “who sits on the courts these days,” she said, “maybe … we ought to be far more concerned about individuals’ civil liberties.”

The number of conservative judges in federal courts has surged. By the end of 2019, President Donald Trump had successfully appointed 187 of them — including roughly a quarter of all sitting circuit court judges, and two Supreme Court justices.

Goodwin and Vladek, a law professor at the University of Texas, Austin, agreed that federal, state, and local governments have ample authority to address public health crises, like the current one.

An Avalanche of Government Restrictions

As of March 16, more than 4,000 people in the US have tested positive for COVID-19. That figure does not reflect the actual number of victims, which is much higher, and is expected to rise sharply in the coming days. Cities, counties, states, and the federal government have exerted their authority to address the growing public health crisis. Recent headlines demonstrate how much power all levels of government have:

“A century later, here we are with all these debates,” she added, referring to anti-vaxxers, who oppose routine shots for childhood diseases like measles: “There’s a question, ‘Can we require individuals to be vaccinated?’ Well, the government can, in fact.”

Supreme Court Justice Oliver Wendell Holmes wrote the majority opinion upholding a Virginia law that permitted the state to forcibly sterilize men and women considered unfit to procreate, Goodwin said. The case, Buck v. Bell, concerned a 16-year-old poor white girl who had been raped at age 16. After the Holmes Court upheld the law, “tens of thousands [of men and women were] forcibly sterilized.”

Holmes perceived increasing births among the lower and inferior classes to be a public health crisis. He cited the Massachusetts ruling that permitted the state to compel someone to be vaccinated as “broad enough to cover snipping fallopian tubes,” Goodwin said, citing Holmes’s words.

The Virginia law served as the model for the Nazis’ eugenics campaign in Germany, Goodwin said. The 1928 Holmes decision has never been overturned.

Nevertheless, Vladek and Goodwin agreed that in recent years, all levels of government have chosen to tread lightly when it comes to balancing public health and civil liberties. Most laws, Vladek said, generally require local and state authorities to document the public health crisis and why “coercive” measures are justified. An individual has the right to challenge a mandate in court.

State and local officials must go through procedural hoops, he said. They have to explain why measures like mandatory quarantines or isolating infected or potentially infected persons are necessary to address a public health crisis. “The government really has to dot the i’s and cross the t’s before calling in the big guns to respond to these public health crises.”

Both Vladek and Goodwin were taken aback by a question posed by WhoWhatWhy: Could the government postpone the 2020 election if the crisis were to worsen?

However, in many jurisdictions, “the government gets to act first, and then the litigation comes second,” Vladek said. Illinois is one state that requires an “advance judicial order” for a quarantine, he added. Illinois, along with Ohio, on March 15 issued orders effectively closing all bars and restaurants, one of the most comprehensive bans now in effect.

State and federal constitutions also have provisions respecting an individual’s right to privacy and autonomy. But, Vladek said, the real brake on governments taking draconian measures is politics. There has to be “sufficient political consensus behind the need for these measures,” he said. As long as they are not “universally perceived as abusive,” he said, the courts usually will uphold these state policies.

He stressed, however, that “calibrating” government responses to these public health challenges depends on “an informed public and the free flow of accurate information.”

What is “alarming,” he said, is “the widespread lack of clarity about what we know, what we don’t know.” That lack of clarity, he added, may be especially important as government officials and lawmakers consider more intrusive surveillance methods to contain the virus.

At a recent Senate hearing, Sen. Bill Cassidy (R-LA) suggested the Centers for Disease Control and Prevention (CDC) consider using Google tracking data to identify those who may have been in contact with infected individuals before they were diagnosed.

“I don’t think there’s any authority for the government to obtain that data simply so that it could identify who these people have been in contact with,” Vladek said. “That’s a bridge too far. … There are limits on what kind of information phone companies and other communications service providers can provide to the government without a court order.”

How Coronavirus Could Set Back the Fight Against Climate Change

However, Vladek acknowledged that “if things really do escalate,” the courts might give governments “a whole lot of room … to collect information in ways we wouldn’t otherwise allow.”

Both Vladek and Goodwin were taken aback by a question posed by WhoWhatWhy: Could the government postpone the 2020 election if the crisis were to worsen?

Vladek called the question a “time bomb,” but offered some reassurance. Federal law, he said, makes no provision for any postponement of the federal election, although Congress could theoretically pass a law to delay it.

The political consensus we would need to support a measure like that would only happen “in a truly dire emergency,” he said.

He noted, however, that even delaying the election would not extend Trump’s term in office. It ends next January 20, he said, adding that should the election not take place, the Presidential Succession Act would determine who would be next in line to serve. In this case, it likely would be Secretary of State Mike Pompeo, he added.

The question “says a lot about the times we’re in,” Goodwin responded. “Ten or 20 years ago, this question would seem laughable. It is dystopic, but we’re also living in times in which things that we thought would never exist, do exist — children in cages, and so much more.”

She suggested accommodations which local jurisdictions are making, or can make, to protect voters — such as mail-in ballots and other efforts to provide “remote access for the vote.”

But underlying the question, she said, is the present problem of “voter disenfranchisement” — whether it’s making people wait for hours to vote or “more explicit” acts of voter suppression:

“Coronavirus or no coronavirus, that’s a real problem for our democracy.”