How to Get Climate Change Deniers on Board With Science - WhoWhatWhy
Reading Time: 6 minutes

The scientific consensus on climate change is nearly unanimous and freely available to anyone, and yet there are people who reject the idea that human activity is warming the planet to dangerous levels.

Given the weight of the evidence and the risks involved, climate skepticism long baffled behavioral psychologist Irina Feygina, who made it the subject of the Ph.D. dissertation she started in 2006 at New York University.

Over her years of research she observed that group identity is thicker than facts.

“When you ask someone about climate change, you don’t get a response that has to do with the topic,” Feygina told WhoWhatWhy. “You get their identity position — they hear you say, ‘are you with the left or the right? Do you trust your group? Do you believe they will take care of you?’”

Understanding these cognitive biases, she said, may be the key to battling climate-change denial.

“The most fundamental need that humans have is the need to belong,” said Feygina. Group, community, and identity are at the core of who we are, and largely determine what we believe and explain why we vehemently defend our beliefs: “The need to belong is absolutely paramount. People go to war, they sacrifice their lives, to belong.”

At the time when Feygina began her dissertation, the intersection of behavioral psychology and climate change was nearly uncharted territory. Feygina was the first to apply the psychological principle of system justification — the concept that people feel compelled to defend the status quo — to climate change. She asked how different social, political, and belief systems influenced views on climate change, and what underlay these beliefs, from a psychological perspective.

Her work made waves. It appeared in New York Magazine and has been cited over 500 times. Since then, other psychologists have used their expertise to ask what is causing the intense polarization we are experiencing around climate change and what solutions can be offered from a psychological lens.

After 10 years of research, several things have become clear to her which, she says, explain why climate denialism persists in the face of overwhelming evidence.

“People go to war, they sacrifice their lives, to belong.”

The bottom line is that beliefs about global warming, as with many other issues, are less about interpreting facts than about psychic needs and cognitive biases. Or, as Feygina described them: “deeply seeded social and psychological processes that were themselves a manifestation of our deepest-seeded needs for safety, community, belonging and happiness.”

In a recent paper published on the academic database ScienceDirect, Feygina and her research colleague Gabrielle Wong-Parodi, a Stanford professor, focus on “motivated denial” — having access to the facts but denying them anyway. 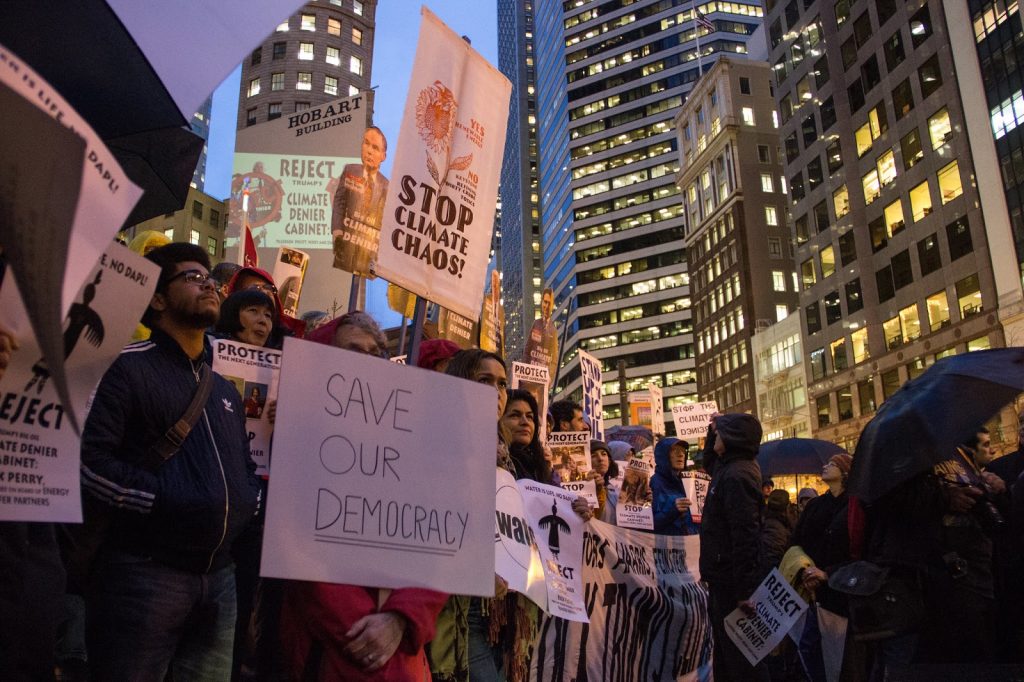 Identity is a critical component of any discussion about climate change.

If group identity can inflame the conversation about how much humans are responsible for the warming planet, it might also serve to defuse matters. When discussing climate change, understanding other people’s identity — what’s important to them, how they view the world — is the key to having a conversation that does not dissolve into tribal hostility and mutual recrimination.

That requires engagement and an earnest attempt to understand other people’s views, said Robert Gifford, who studies the intersection of environment, social, and personality psychology at the University of Victoria in British Columbia. Instead of arguing that “Climate change is important,” says Gifford, who was not involved in the report, it’s better to ask “What is important to you?”

In science, there is a method to the madness — first, understand the problem, then find the most appropriate solutions. But in politics and communications, addressing the problem induces a fear reaction: “hunker down and wait till the worst is over” or, as with climate change, “deny, deny, deny.”

To bypass this reflexive reaction, psychologists say to avoid using politically loaded terms when discussing this topic. In fact, better to lock up the words “climate change” and throw away the key. 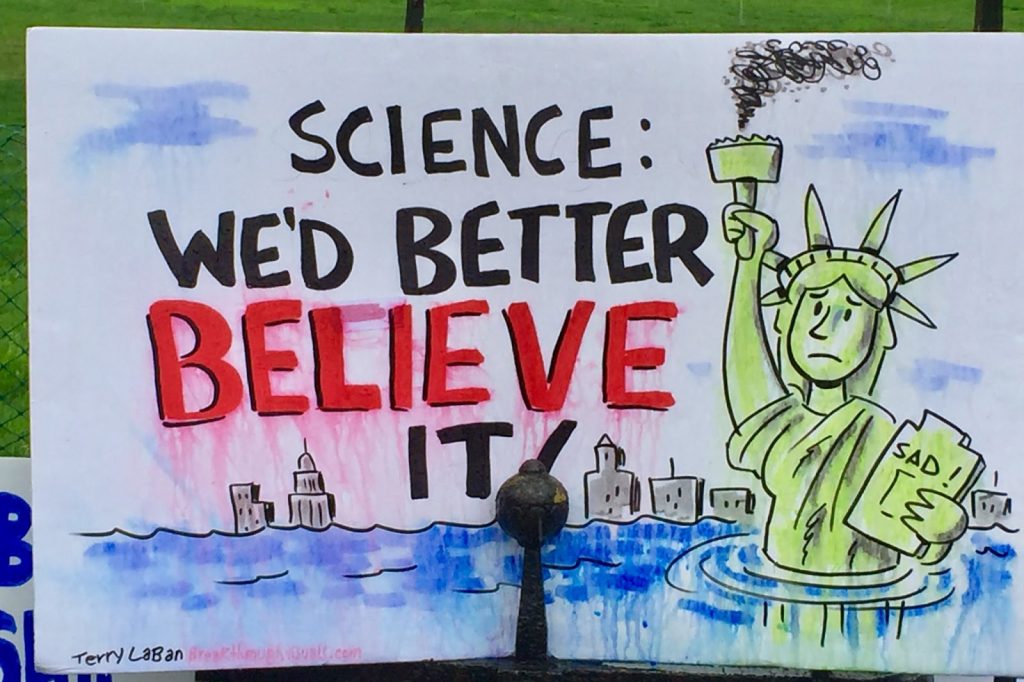 In the US, climate change is an extremely polarizing issue. It has taken people to different planets and alternate versions of reality. Science is supposed to be a neutral process of investigation, but in the US, as Feygina notes, science is seen in partisan terms, as having a motive and aligning with a certain political party.

This mob mentality regarding climate change didn’t appear out of thin air. “Humans are not hard-wired to be polarized about climate change,” says George Mason University cognitive-science professor John Cook, who had no role in the study.

“When people learn how they are deceived they learn how not to be deceived.”

Cook believes that the rift between those who accept climate change science and those who don’t stems from an earthquake of misinformation that violently struck the US as soon as the notion of climate change reached the public sphere, and has been sending consistent aftershocks ever since.

Misinformation is challenging to root out, he explained, but not impossible to tackle.

Educating people about how they may be deceived can stop misinformation in its tracks, he said. “When people learn how they learn not to be deceived.”

Cook’s father used to be a climate change denier. Cook and his father, Cliff, would argue endlessly about who was right. “I would present the facts, give him all the information, but I couldn’t change his mind,” said Cook.

But when the Queensland, Australia, government offered a financial reward for installing solar panels, Cliff jumped on board. Since then, the government has sent him quarterly checks for sending power back into the grid, which he smugly reports to Cook over the phone every three months. Cliff now believes that climate change is both real and caused by humans.

“It’s an important lesson that belief change and behavior change aren’t necessarily one-way, they can go in either direction,” said Cook.

As a country that is home to diverse communities with different needs and desires, it is important to be aware of different strategies for confronting climate denial. “Communication often gets boiled down to these simple dichotomies — ‘do we do this or do that?’” says Cook. However, “there is no silver bullet to addressing climate denial.”

Feygina hopes the information provided in her article will help people understand that we won’t convince each other if we keep focusing on the problem, as it has become too entrenched in identity. In an email, she wrote, “I would love for people to understand what is going on inside of ourselves and other people around the issue, so that we don’t get ever more polarized and filled with enmity toward each other, and become less and less able to take effective action to protect ourselves.”

Most people don’t need a deep understanding of a problem to get on board with solutions. “We don’t come to people and give them a full rundown of cancer and public policy issues. People don’t understand the breakdown of the corona virus spreading,” said Feygina. “We have an issue at hand and people are focused on solutions.

“The path forward is in engaging people in action that aligns with their identity and will help reduce climate change,” she added. “Solutions provide confidence and empowerment — people feel they can influence the world they live in.”