As President Donald Trump used his impeachment acquittal as a launchpad to settle scores with his political opponents, commentators from around the world surveyed the scene and drew very different conclusions — including about how it will all play out in the long run. WhoWhatWhy monitors global opinion and its impression of the far-reaching developments.

United Kingdom: Sky News, Amanda Walker — “Mr Trump desperately wants to win the 2020 election. But it’s not just about victory for him anymore. It’s about revenge against the party that exposed his behavior and tried to bring him down.

“This impeachment has surely proved that Mr Trump is willing to go outside acceptable norms to secure victory.”

The specter of dynastic authoritarianism — a Caesar in the White House — now looms large over the United States, Germans were warned…

+++
Germany: Die Welt, Hannes Stein — “Trump has a good chance of a second term. And one thing has long been clear: In this second term Trump will do everything to secure the rule of his clan. Already Donald Trump Jr., Trump’s eldest son, is installed as heir to the imperial Trumpism throne — and the Republican party base cheers him on.

“Of course there will still be elections under the rule of the Trump clan. There are also elections in Recep Tayyip Erdogan’s Turkey; even in Putin’s Russia. Only they don’t mean much anymore. Under Trump, a development that already exists will continue at an accelerated pace: The American right to vote is increasingly restricted — in favour of whites, to the disadvantage of minorities. After all, the United States has only been a democracy since 1965; before that, apartheid laws were in force in the southern states, explicitly excluding blacks from the political process.

“Modern dictatorships do not rule by terror; their aim is rather to ensure that the guilty get off scot-free. From the outside, the American institutions — the Supreme Court, for example — will look the same as ever, but they will be undermined. The American flag will fly over a country whose main characteristic is no longer hope but cynicism.

“The American Senate has surrendered to Donald Trump. The worst fears of the American founding fathers have become reality: A Caesar sits in the White House and Congress has abdicated before him.”

By contrast, a former Editor of The Times in the UK was sanguine that the turbulence of the Trump epoch was a mere moment in US political history…

+++
United Kingdom: the Guardian, Simon Jenkins — “Trump will be ousted by a perfectly healthy democracy in 2020 or 2024. In either case, there is no bar to the Democratic party finding a plausible candidate to succeed him, and repair whatever damage he is perceived as causing. His disruptive term of office will be a warning to all hubristic governments. Otherwise, he will probably be a mere blip in the history of America. When he goes, I imagine there will be a flurry of books on democracy’s glorious rebirth.”

Meanwhile, Trump may have won the battle of impeachment but the Democrats were still well-positioned to emerge victorious in November, believed some commentators…

+++
South Africa: Daily News, Shannon Ebrahim — “The Democrats in the US House of Representatives may have lost the impeachment battle, but they have won the political war. The impeachment trial exposed Trump for what he really is — a leader who treats America as his personal fiefdom and does not believe he has to account for his actions.

“While Trump may feel vindicated, today he is an emperor with no clothes, and the Democrats have a barrage of political ammunition to use against him in the upcoming election.” 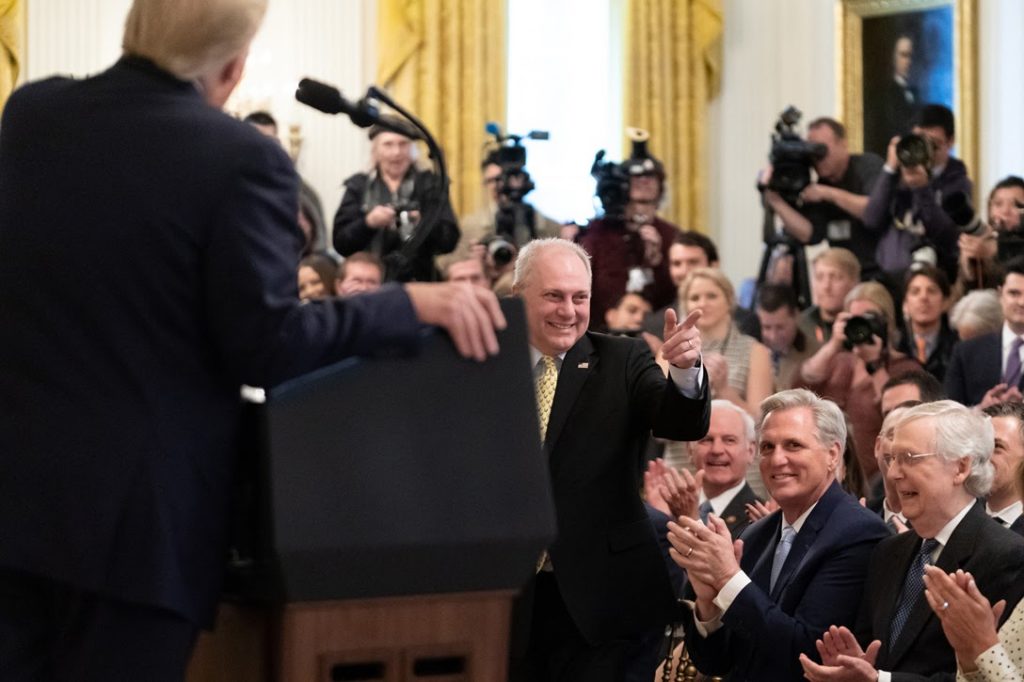 President Donald Trump recognizes US Rep. Steve Scalise (R-LA) on February 6, 2020 in the East Room of the White House, during Trump’s response to being acquitted in the Senate impeachment trial. Photo credit: The White House / Flickr

+++
But in New Zealand’s alt-media, there was fear that left identity politics would fragment the anti-Trump opposition…

New Zealand: the Daily Blog, Martyn Bradbury — “Tell white men they are the problem long enough, and they will become the problem.

“The delineation of power in a capitalist society is NOT identity, it is class. It is the 1% + their 9% enablers vs the 90% rest of us. If we refuse to engage in politics beyond our skin colour, genitalia and sexual orientation we will never find the solidarity to build the better unified future all human beings yearn for.

“If as a woke activist your starting point is that all men are rapists, all white people racist and anyone standing up for free speech a Nazi, you might want to consider if you are simply providing hate merchants like Trump the ammunition he uses.

“Trump shows us he will utilise resentment for personal advantage in a way that makes micro aggression policing look like the alienating middle class fad it is.

“Be afraid Brothers and Sisters, be very afraid.”

In Nigeria, the impeachment accusations regarding Trump’s attempt to blackmail a weaker nation, were a reminder of the Obama’s administration’s intervention in its 2015 presidential elections…

Nigeria: Opinion Nigeria — “The Democrats resolve to impeach Trump is perhaps comeuppance, but certainly an insult to Nigerians. The same legislators rebuking Trump supported Obama’s interference in Nigeria’s 2015 presidential election. The poll, as Obama desired, resulted in the first-in-history defeat of the incumbent president, Goodluck Jonathan. It is at best surprising, and at worst annoying that the same Democrats who backed Obama’s action on Nigeria are scolding Trump for trying to aid his win through foreign interference. How miserable for them to live with their own nemesis!”

However, from a Nigerian perspective, the impeachment process was a powerful advertisement  for the democracy that still needs to take root in Africa’s most populous nation…

“US democracy is not perfect, but Nigeria has a lot to learn from it. The latter must adopt the former’s positive deeds and embrace attitudinal change. One may blame the large efficiency gap between US and Nigeria’s democracy on the year of adoption. US democracy is over 230 years old, while Nigeria’s current democratic experiment is only 20 years old. But then, if Nigeria’s systemic failure is anything to go by, it will take us over a thousand years to achieve the progress US made in 230 years. The reason is not far-fetched. US has what Nigeria lacks: Transparency, accountability and leadership commitment to growth and development.”

One response to “Trump, 2020 Election and Impeachment Fallout — What the World Thinks”