Democratic presidential candidates have traveled the country to make their cases and discuss their agenda, but they have largely been silent on an issue that may deprive the eventual nominee of winning the general election: attacks from within and abroad on fair and free elections. One notable exception is Amy Klobuchar.

While the Minnesota senator is not the only Democratic candidate to present a plan on election integrity, she is the one who is talking about this issue the most.

The first primary is only three months away, and yet it wasn’t until the fourth Democratic presidential debate that moderators raised the issue. Klobuchar sparred with entrepreneur Andrew Yang in a quick exchange, and the debate pivoted to a new topic immediately after:

Yang: We have to let Russia know, look: We get it. We’ve tampered with other elections, you’ve tampered with our elections. And now it has to stop. And if it does not stop, we will take this as an act of hostility against the American people. I believe most Americans would support me on this … But Russian hacking of our democracy is an illustration of the 21st century threats.

Klobuchar: I want to respond to Mr. Yang. I don’t see a moral equivalency between our country and Russia. Vladimir Putin is someone who has shot down planes over Ukraine, who has poisoned his opponent, and we have not talked about what we need to do to protect ourselves from Russia invading our election. This wasn’t meddling. That’s what I do when I call my daughter on a Saturday night and ask her what she’s doing. Sorry.

Klobuchar also took the opportunity to explain the alleged campaign violations that spurred an impeachment inquiry into President Donald Trump:

When [Trump] made that call to the head of Ukraine, he’s digging up dirt on an opponent. That’s illegal. That’s what he was doing. [Trump] didn’t talk to him about the Russian invasion [of Ukraine], he talked to him about that. So, I’m still waiting to find out from him how making that call to the head of Ukraine and trying to get him involved in interfering in our election makes America great again.

In a summary of the July 25 call between Trump and Ukrainian President Volodymyr Zelensky, the alleged violation took place when Trump said that “I need you to do us a favor, though,” after Zelensky expressed intentions to purchase US anti-tank missiles. That sentence triggered a whistleblower to come forward and a watchdog group to file an FEC complaint.

“It is important that we not lose sight of the election-law violations that spurred the impeachment inquiry in the first place,” Corey Goldstone, communications manager at Campaign Legal Center, told WhoWhatWhy this month.

Election integrity experts warn that Congress’s failure to secure the 2020 election could open the door to foreign interference and make what happened in 2016 look like a test drive. Most, if not all, of the Democratic candidates for president have gone on record to emphasize this point or introduce a plan to drastically change how Americans vote. Among the frontrunners, both Sens. Bernie Sanders (I-VT) and Elizabeth Warren (D-MA) have presented plans to protect US democracy.

“We have these laws for a reason,” Goldstone said. “When Trump solicited damaging information on a political opponent from Ukraine, he abused his power and violated campaign finance law.”

Making It Easier to Vote

Minnesota voters pride themselves as the country’s most politically engaged citizens. In fact, turnout in Minnesota is almost always higher than the national level in most elections — at least 60 to 70 percent of eligible voters actually cast a ballot, according to Jim Cottrill, a political science professor at St. Cloud State University.

“A lot of it is just political culture,” Cottrill told WhoWhatWhy. “People feel like it’s a sense of duty, a responsibility of citizenship.” 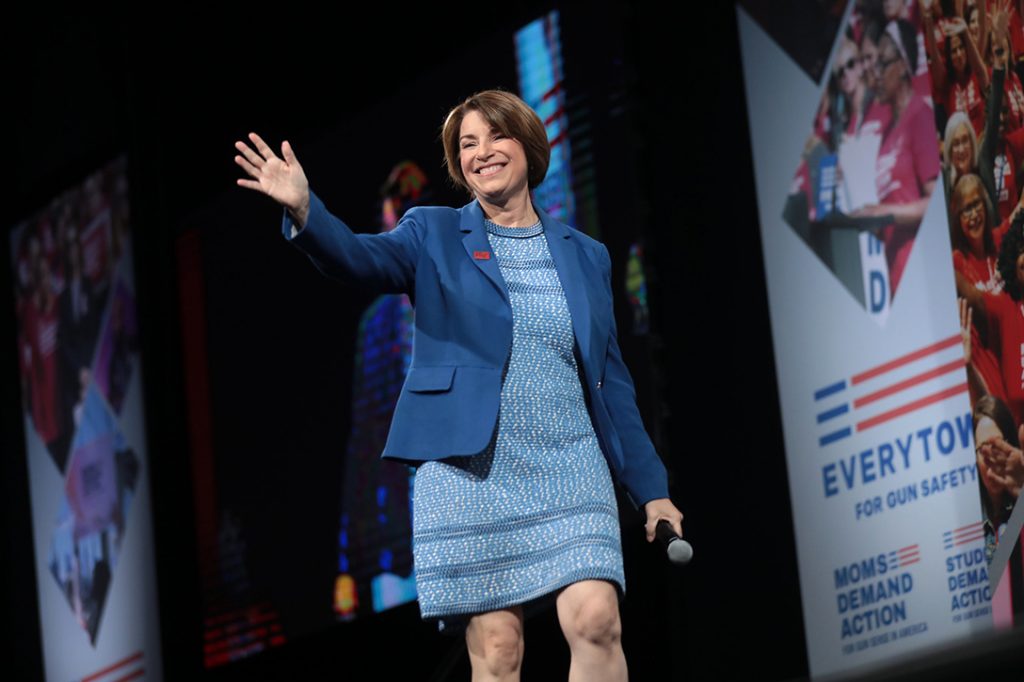 In June of this year, the Minnesota senator offered more insight as to why she has made election integrity a key issue when she spoke to voters at MoveOn’s Big Ideas Forum — where Democratic presidential candidates shared their boldest ideas:

Well, we’re not going to be able to do any of [the ideas brought up by other candidates] until we take back our democracy, right? There is just no way. And you look at what has been happening in this country, right? Just this week, the secretary of the state of Texas had to resign because he had to admit that he was part of a fraudulent scheme to push voters off the rolls.

Klobuchar explained circumstances in North Carolina, where a court ruled that the state discriminated against voters with “surgical precision,” and Georgia, where then–Secretary of State Brian Kemp (R) declared 53,000 voters ineligible under the state’s “exact-match” ID laws.

“And if he hadn’t done that, Stacey Abrams would have been governor,” Klobuchar told the crowd.

Georgia, which came under intense scrutiny during the 2018 midterm elections due to allegations of voter suppression and sudden voter-roll purges, will be the location for the Democratic presidential primary debates late November. Just this week, the secretary of state’s office announced a second mass voter-roll purge that could impact 300,000 Georgians.

Klobuchar’s “big idea,” as she describes it, is a requirement that every state automatically register eligible voters once they turn 18 years old. She also supports restoring voting rights to individuals with past convictions, citing “what they did in Florida, which is when [felons] get out, they get to vote.”

Her argument is that issues most salient with voters can be addressed only if the voting is made easier. She told students at the historically black Benedict College during a forum on criminal justice reform that “[all] of these things would allow people to be a part of our democracy instead of shutting them out.”

Klobuchar wants to ban the practice of “use it or lose it,” where a state can purge voter rolls based on voter inactivity, and pass same-day voter registration. She has also expressed support for a constitutional amendment to overturn the 2010 Citizens United ruling, as well as publicly funded campaigns.

In Washington, Klobuchar has made numerous pleas on the Senate floor urging colleagues to pass legislation that would require back-up paper ballots in every state and mandate that campaigns notify the FBI if a foreign government contacts them.

One bill that Klobuchar mentioned during the last debate was the Honest Ads Act, which would require political advertisements on social media to include a disclosure that lists who paid for them.

Any bill that passes in the House, however, joins dozens of others in a Senate legislative graveyard, tended to by the self-proclaimed “grim reaper,” Majority Leader Mitch McConnell (R-KY). And, in an August interview on MSNBC, Klobuchar called the GOP’s stonewalling on election security bills a “national security risk.”

Klobuchar went to the Senate floor again October 22 and urged that Congress pass the Honest Ads Act after intelligence officials sounded the alarm about foreign actors using social media to undermine the 2020 election.

Senate Republicans, however, objected to her unanimous-consent request.

Not only did Senate Republicans block her efforts, they also blocked Sen. Dick Durbin’s (D-IL) unanimous-consent request to pass the Secure Elections Act — which Klobuchar introduced in May and which would invest $1 billion in election infrastructure — just minutes later.

Intelligence officials are once again sounding the alarm that adversaries are using social media to undermine the upcoming elections. Just yesterday, @Facebook announced that it removed a network of Russian backed accounts posing as locals in swing states. It never ends.-AK pic.twitter.com/HzLbptWKKy

Even before the recent admission by acting White House Chief of Staff Mick Mulvaney that Ukraine’s military aid was withheld in order to encourage an investigation into former Vice President Joe Biden and his son Hunter, election integrity experts have warned that the 2020 election is just as, if not more, vulnerable to attacks by foreign actors than 2016.

Election Security on the National Stage

In states around the country, lawmakers and voting-machine vendors have used that phrase to promote the use of ballot-marking devices — which keep votes on a barcode that voters cannot read.

Dear media & election-security experts. Pls do not ever again use the phrases "voter marked paper ballots" or “voter verified paper ballots”–or even "paper ballots"–w/o disclosing that vendors & other election insiders now construe these phrases to include dangerous BMDs. 1/ pic.twitter.com/iHduQ7tJxk

Warren, who introduced the most comprehensive plan to address this the day before the MSNBC Democratic presidential primary debate last June, would require “hand-marked, voter-verified paper ballot machines” as part of any election reforms.

Nevertheless, she and moderators passed on the opportunity to discuss it that night. Sen. Michael Bennet (D-CO), who has yet to make the debate stage since the CNN debate in July, briefly brought up the Supreme Court’s failure to take on partisan gerrymandering that morning. He also called for passing a constitutional amendment to overturn Citizens United, which allowed unlimited spending by dark money groups before an election.

Still, Cottrill argued, securing the 2020 election from foreign interference will remain a key issue and continued point of emphasis by the candidates after the Russian interference in 2016.

“I think it will be a salient issue for a lot of Americans, particularly as this impeachment inquiry continues to move forward,” Cottrill said. “Certainly for people in Minnesota, it’s on their minds.”

As Klobuchar herself said on the Senate floor this month in response to Facebook announcing that it removed a network of Russian accounts posing as local residents in swing states: “It never ends.”