Native American voters could tip the scales in several key races across the country next year, but as Democratic presidential hopefuls work to increase turnout in Indian Country, Republican-led state legislatures have passed measures to suppress those votes.

In states such as Arizona, Wisconsin, and North Carolina, a higher turnout among Native American voters could help Democratic candidates — but restrictions placed on reservation communities could significantly lower turnout. The far-reaching consequences of more discriminatory voting laws have indirectly, and in some cases directly, suppressed the electoral power of reservation communities.

A Long Way to Vote

“I find it embarrassing that almost half this House doesn’t seem equally as disturbed by Native Americans voting in chicken coops, driving 98 miles one way to register. I’d like you to focus on that for a while,” Landreth told the committee.

After North Dakota lawmakers passed a voter ID law that prevented members of the Turtle Mountain Band of Chippewa tribe from voting, NARF filed a lawsuit just before the 2016 presidential election.

US District Court Judge Daniel Hovland ruled in NARF’s favor, but the battle was far from over.

On April 24, 2017, Governor Doug Burgum (R) signed a bill that was similar to the overturned law. NARF filed a new lawsuit, but after Hovland ruled in their favor again, a divided panel of judges from the Eighth Circuit US Court of Appeals reversed the ruling in July.

For the past two years, one of NARF’s main initiatives was to conduct a series of field hearings across Indian Country to learn why Native Americans aren’t voting. The answers that they received had a lot to do with institutional barriers that were keeping them from accessing the ballot box.

According to Jacqueline De León, staff attorney with NARF, many Native Americans lack a residential street address or documentation of that address. That makes registration difficult because these communities are often in rural areas, and those homes are typically unmarked.

Far-flung polling stations are another serious impediment to Native Americans exercising their democratic rights. Most states and counties have discretion on where they place polling locations. That means, according to De León, that Native Americans aren’t getting polling locations — even if the reservation community is larger than the community where the polling place is.

“One of the big barriers is just how far polling locations are,” said De León. “Often, they’re not located on the reservation, they’re located at an adjacent county. That can be 20 to 40 miles, and as far as 160 miles in Nevada to vote, which is obviously unreasonably far.”

Combine that with poor road conditions in November and lack of transportation due to poverty, she added, and therein lies the perfect storm for voter disenfranchisement.

“On top of the fact that Native populations are disproportionately homeless, what we have is a severe housing crisis in Indian Country, where people are rotating from home to home,” De León said. 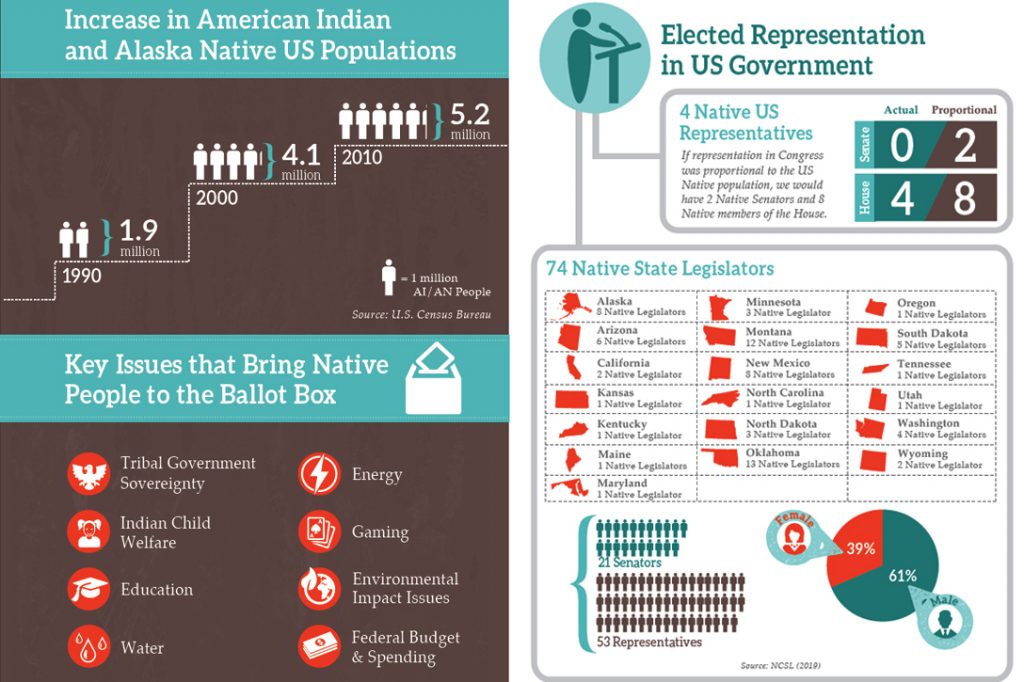 It also makes vote-by-mail practically impossible in a lot of instances, De León suggested. Few Native Americans get mail service directly to their door. Rather, they get their mail at the post office — if they get it at all.

It is not uncommon to find reservation communities opening their homes to friends and relatives, with anywhere from 12 to 20 people living in one home at a time. In these instances, only one or two adults have their name on the lease and receive bills. The rest of the individuals in the household do not have the necessary documents, like utility bills, to prove that they live on a reservation so that they can register to vote.

In Washington state, Democratic Gov. Jay Inslee recently signed the Native American Voting Rights Act. The new law aims to increase access to the polls; a tribe can now designate a building as a polling place, or have a person pick up and drop off ballots.

New Mexico Secretary of State Maggie Toulouse Oliver (D) created the Native American Voting Task Force to increase registration rates, and Colorado passed a bill this year that requires — if a tribe requests it — automatic approval of a polling location by the state.

The NAVRA is personal for Udall, whose grandfather served as chief justice of the Arizona Supreme Court in 1948 and authored the opinion that extended voting rights to Native Americans living on reservations.

“From eliminating polling and registration locations, to passing strict voter ID laws that target Native Americans living on reservations, these undemocratic barriers have blocked many Native Americans from exercising their basic civil right to vote,” Udall said in a statement after the bill was introduced.

In August, 2020 Democratic presidential hopeful Sen. Elizabeth Warren (MA) announced her platform for increasing voter participation around the country. Her plan would do much to enfranchise Native American voters, for example by providing access to vote-by-mail and early voting, as well as making Election Day a federal holiday. She later expanded her platform to include support for the NAVRA, calling voter suppression in Indian Country a “host of festering discriminatory practices.”

“On top of the fact that the irony of proving yourself as a Native American in order to vote is pretty high, the idea that Native Americans wouldn’t belong here, that you have to prove that they rightfully exist on their traditional homeland, is a little bit insulting,” De León said.