Chennai, India’s sixth-largest city, is running out of water. The parched Chembarambakkam reservoir, plus three others supplying the city, are all nearly empty. Currently, water is being trucked into the city’s neighborhoods; and standing in line is becoming part of each resident’s daily routine. In some areas, the queues of the thirsty start to form at 4 AM.

Still, this effort does not meet half of the city’s basic water requirements. The drought is affecting local businesses, schools, and hospitals in the city of 9 million people. There is no air-conditioning in most parts of the city, where summer temperatures can reach 41° Celsius (106 Farenheit). In many offices, toilets can only be flushed if there happens to be enough water in the designated buckets. Some Chennai residents are forced to drink contaminated, muddy water from broken water pipes, and desperate individuals have resorted to ambushing water trucks.

While drought is an annual occurrence in India, its frequency and severity are increasing, as temperatures continue to rise.

“Groundwater wells are drying faster and faster every year,” said Jyoti Sharma, president and founder of FORCE, an Indian NGO working on water management. Currently 65 percent of India’s water reservoirs are drying out. Out of India’s 91 reservoirs, 11 are already fully dried out, according to a recent study conducted by the Central Water Commission (CWC).

Chennai’s scramble for water is not an India-specific issue. South Africa faced similar battles in  the Cape Town water crisis from  2017 to 2018. Due to the unexpected, severe drought during the period, Cape Town became the first major city in the world to nearly run out of water.

In 2015, Brazil’s financial center of Sao Paolo temporarily cut water supply to homes as the city faced its biggest drought in a century; scientists attributed the incident to deforestation and climate change. Last year, Bolivia suffered its most intense drought in the last 25 years; the city of La Paz declared a state of emergency.

Western countries are similarly facing potential water crises. Melbourne, Australia, will likely begin running out of water by 2028 if average temperatures continue to rise, and California recently experienced one of its most intense droughts in history.

As Geraldo Alckmin, former governor of Sao Paolo, stated during the 2015 water crisis: “When it rains, it rains too much, and when there’s drought, it’s way too dry.”

Indeed, water seems to have become a key issue of climate change. According to a recent study by the World Bank, climate change affects water supplies in a variety of ways. Due to a continuing increase in average temperatures, dry regions will see more and more droughts, while rising sea levels and melting glaciers will cause devastating floods in coastal areas.

These climate-driven upheavals will have drastic effects on economic growth and migration, and will likely cause civil unrest. Regions in Central and East Asia, as well as Africa and the Middle East, could lose up to 6 percent of their GDP, due to “water-related impacts on agriculture, health, and incomes.” 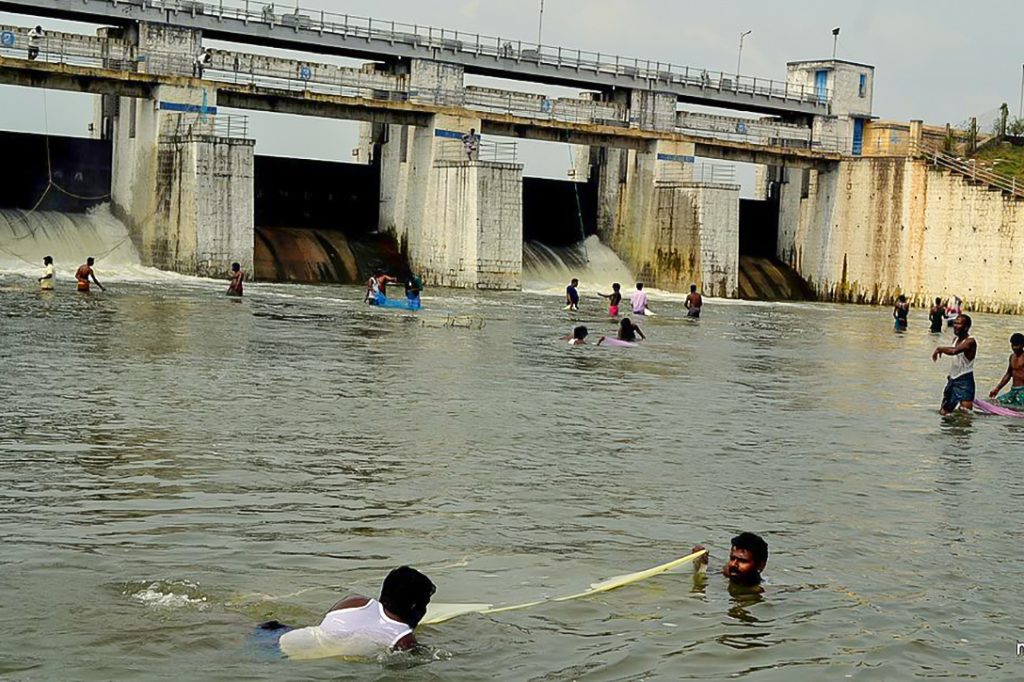 Since the 1970s, scientists have argued that the global increase in temperature relative to pre-industrial levels has to be kept below a 2°C threshold by reducing greenhouse gases, such as CO2 emissions. This goal was adopted as official UN policy in 2010.

However, research has shown that even with the 2°C target, islands and low-lying countries are in danger of flooding, among other devastating global changes. According to the most recent IPCC Summary for Policymakers, a 1.5°C increase would be more realistic if the world is to avoid an apocalyptic future.

What difference does a mere 0.5 percent make? As a recent New York Times article put it: it is the difference between 37 percent as opposed to “just” 14 percent of the world’s population exposed to extreme heat waves. Even if we manage to reach this goal, we will be exposed to extreme temperatures likely to cause food insecurity and migration. Given the best case scenario of a 1.5°C increase, 2050 will see some of the following changes: the climate of London will be most similar to current-day Melbourne, with maximum temperatures increasing by 5.9°C; Milan will become comparable to Dallas, with a 7.2°C rise in maximum temperatures; and Seattle will match San Francisco, with a 6.1°C rise.

In order to keep the 1.5°C target, CO2 emissions have to be reduced by 45 percent by 2030. However, to even begin to achieve this goal, global policy changes have to be made in the next eighteen months.

What is being done? A recent statement by Philip Alston, UN special rapporteur on extreme poverty and human rights, sums it up best. Criticizing policymakers, governments, and international organizations for their mostly ineffective, bureaucratic haggling in relation to climate change, Alston writes: “States have marched past every scientific warning and threshold, and what was once considered catastrophic warming now seems like a best-case scenario … Most human-rights bodies have barely begun to grapple with what climate change portends for human rights, and it remains one on a long laundry list of ‘issues,’ despite the extraordinarily short time to avoid catastrophic consequences.”

The UN will hold a Climate Change summit on these issues next week, leading up to its annual Climate Change conference in November, with the goal to “raise ambition and increase climate action.” However, most of these climate conferences have yet to lead to meaningful action, as states have not even met their past commitments to reduce emissions. While Secretary-General António Guterres cites the recent 2015 Paris Agreement as a landmark in the fight against climate change, there is no enforcement mechanism to ensure that the signing countries adhere to the goals of the agreement, even though those goals were actually set by the nations themselves.

According to a recent report published by a German think tank, only three out of 21 leaders of right-wing populist parties represented in the EU Parliament accept the reality of climate change. And because these parties have increased their representation within the parliament, the European commitment to combating climate change could be diminished further. Meanwhile, Brazilian President Jair Bolsano has notoriously given a green light to increased deforestation in Amazonia, and Indian Prime Minister Narendra Modi cut in half government funding for sustainability projects while abolishing environmental regulations that might interfere with industrial activity.

Should We Just Give Up?

What can be done to tame the increasing climate anxiety in the face of these issues? A recent BBC article cites as a hopeful sign the UK government’s intent to “legislate for a net zero emissions target at an appropriate point in the future.” However, in light of the mounting scientific evidence of an impending global catastrophe, such statements seem underwhelming.

Time is running out for impactful legislation. Could a youthquake be the answer? The possibility of avoiding a climate disaster rests with a new generation of voters demanding that policymakers act without any further delay. In contrast to the grandiose, empty PR statements of politicians and international organizations, new and creative activist groups, such as Extinction Rebellion, and the likes of 16-year-old Swedish environmentalist Greta Thunberg, are galvanizing climate awareness among young people.

Hopefully, this new wave of climate activism won’t just limit itself to “recycle or die” tote bags. Rather, it will incentivize voters to support leaders who prioritize the most critical issue of our times: sustaining a planet we can all live on.