Election integrity advocates have hailed a string of decisions this year that overturned gerrymandered state maps — most of them drawn up following a Republican wave in 2010. What no one is talking about is the agenda these illegally constituted majorities have enacted while in power.

The unconstitutional maps may have been overturned — but these laws remain.

We looked at North Carolina, which is among the most egregious offenders when it comes to gerrymandered maps and voter suppression measures, to determine what can happen when one party cares more about staying in power than about the will of voters.

Related: A Case Study in How the GOP Hijacks Democracy

The year 2018 began with a hard-hitting decision by a federal court, which found district maps drawn by the state’s General Assembly to be unconstitutionally gerrymandered.

Even if the map is redrawn, the laws passed by the unconstitutionally obtained majority will stay on the books.

The elections held under the aegis of that redrawn map gave Republicans an edge that they used to pass, among other things, voter suppression laws, as well as the controversial “bathroom bill” that ended up costing the state a lot of money.

“It is an odd routine to which we’ve become accustomed in North Carolina,” said Gene Nichol, a University of North Carolina law professor, in response to the ruling. “We learn that, in our name, our leaders have given us the largest, most blatant and indefensible political gerrymander in American history. We’re unsurprised. They’re unashamed. They more likely jet off to an American Legislative Exchange Council meeting to brag about it.”

Though the maps were deemed unconstitutional, the lawmakers elected on the basis of these maps were allowed to push their agendas forward. The very point of gerrymanders is to give one party disproportionate representation, which means that the lawmakers who benefit from it, by definition, do not accurately reflect the views of the population.

And even if the map is redrawn, the laws passed by the unconstitutionally obtained majority will stay on the books.

In the case of North Carolina, this meant, for example, passing a piece of legislation that would further consolidate the power of the GOP. Dubbed the “Monster Bill” by Democracy North Carolina, the legislation added many barriers to voting that targeted “African Americans with almost surgical precision,” as a court later found, and gave big donors new ways to covertly influence elections.

The 56-page bill, which attorney Keesha Gaskins of NYU’s Law School called “the strictest in the nation,” was passed in 2013.

“Four of the last five election cycles have been based on illegally drawn legislative districts. It thoroughly raises significant questions about what is this democracy all about.”

The law created many restrictions for North Carolina voters — including a photo ID requirement and reduced poll hours — while allowing increased numbers of political-party poll “observers” (who may influence or even intimidate voters). It also fully eliminated all of the following: teenage pre-registration, same-day registration, out-of-precinct voting, the first week of early voting, and straight-ticket voting.

Some of the provisions of the bill have been overturned, such as the photo ID requirement, and the elimination of out-of-precinct voting, same-day registration during the early voting period, and teenage pre-registration. Many of them remain, however: candidates are still required to rely entirely on private donors and are not required to appear in their ads saying “I approve this message.”

“They very early on went after voting rights, the voting issues and what we call voter protection,” Mary Klenz, a longtime member of the nonpartisan League of Women Voters, told WhoWhatWhy. “The Voting Rights Act was repealed. This whole atmosphere comes to a lot of power in the hands of people to subvert, undermine, [and] disenfranchise all the voting protection that had basically been passed over the previous 15 years.”

Klenz added that the League of Women and Democracy North Carolina fought tooth-and-nail in the previous decade for the voting rights that were later stripped.

Despite much fighting by nonpartisan parties to undo the Monster Law’s voter suppression, the GOP has used stalling tactics to drag out the court battles for years. “With each victory, the court delayed the League of Women’s progress in the redistricting progress,” Klenz argued. 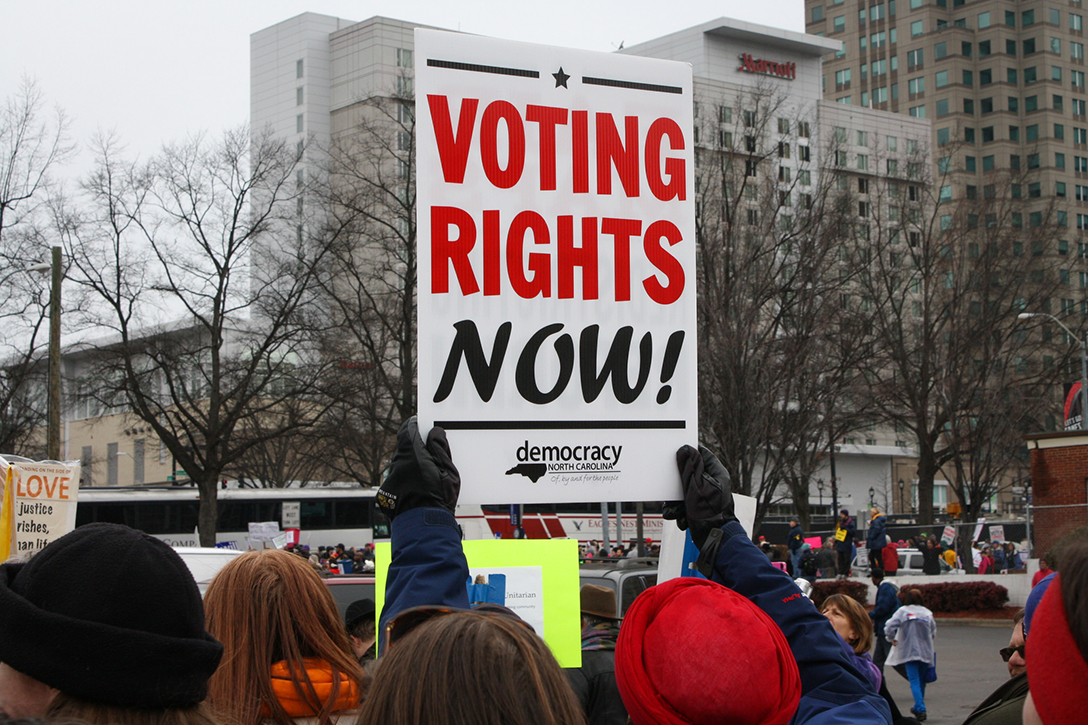 “It just keeps going back and forth and back and forth,” she added. “Our side, our issues keep winning but then they are subverted by the legislature deliberately.”

North Carolina’s NAACP has also been active in the the fight against the effects of gerrymandering.

“The North Carolina NAACP, with the approval of the national office, has vigorously challenged all of these illegal enactments about the legislature from the Monster suppression law to the redistricting decisions that the legislature has made,” Irving Joyner, professor of law at North Carolina Central University, told WhoWhatWhy. Joyner also serves as legal counsel and chairperson of the Legal Redress Committee for the state NAACP.

He pointed out that the group has been successful in challenging the redrawn maps on the grounds that they were racially discriminatory.

Joyner believes that an act committed by an illegally constituted legislative body should also be illegal.

“The weight of the illegal authority … has made some terrible legislative decisions in the last ten years. Four of the last five election cycles have been based on illegally drawn legislative districts. It thoroughly raises significant questions about what is this democracy all about.”

In addition to voter suppression, education in North Carolina has been a massive victim of gerrymandered elections and voter suppression laws. Budget cuts have been made through legislative decisions that drain public school money in favor of private, state, and corporate-run schools, Joyner said.

Other laws were passed that would not have been in other circumstances, such as the infamous bathroom bill that targeted the transgender community. The fallout from this legislation cost the state $3.76 billion, according to CNBC, after some large corporations and entities such as the NCAA refused to do business in the state.

Joyner added that the state legislature also passed a tax bill that benefited corporations and the rich “at the expense of poor people in the state.”

And then there are changes that might have passed if North Carolina’s map reflected the way the voting population actually leans politically, for example a Medicaid expansion under Obamacare.

“The decision for us not to expand Medicaid, to cover half a million people in North Carolina who were and are in need of ongoing medical insurance to help them deal with medical issues […] was really egregious and very significant, especially to those individuals and their families who have now had to labor through medical problems that they should have been able to find adequate medical services for,” Joyner said.

Klenz agrees, saying she feels confident that the Medicaid expansion would have happened had it not been for the gerrymandered maps and the Monster Law.

“I would bet my retirement plan on that, that that would have passed under different circumstances,” she said.

Klenz added that GOP leaders applied pressure down the line and told rank-and-file lawmakers: “Stay in your own lane. Don’t get into this stuff. We’ll tell you what to do.”

North Carolina is not the only state facing gerrymandering and redistricting. Pennsylvania had its congressional district map redrawn by the state’s Supreme Court in February after GOP lawmakers refused to comply with a court order to redraw it themselves. The US Supreme Court denied a plea by Republicans to block the new map a few weeks later. Meanwhile, Texas faces its own battle. The US Supreme Court heard oral arguments in April to examine whether a lower court’s ruling that the current map discriminated against minority voters. A ruling is expected in June.

What ties the three states together is that the maps in question were all drawn overwhelmingly in favor of the Republican party.

“We moved here in 1973, right in Charlotte in the middle of the school integration,” said the League of Women Voters’ Klenz. “I always felt from the day we moved in and the day that we were doing that [integration], we were moving forward. There was a little bit here, a little bit there. Big bits here, big bits there since 1973.

“Since this takeover has happened, we have gone so far in the opposite direction.”

Related: A Win for Democracy in Pennsylvania

One response to “Public Pays a High Price for Extreme Gerrymandering”