Democracy in the US is facing a relentless assault from state governments intent on staying in power by redrawing districts and suppressing the vote. In many cases, the only thing that stands in their way are federal courts fairly applying the law. But that could soon change.

President Donald Trump, with an assist from the GOP-controlled Senate, has been highly effective in stacking federal courts with conservative judges. This could turn out to be the most enduring part of his legacy.

This came about because of an unusually large number of openings on the federal bench — a direct result of the Republican-led Senate blocking many of President Barack Obama’s nominees — and Trump seems poised to fill as many as possible with young, conservative judges whose impact will be felt for decades to come.

A key area in which they will be asked to rule is voter rights, a long-standing political battleground in the US.

“Battles about voting rights have happened throughout history. … We think of voting rights as a progressive, whiggish climb, always advancing forward and upward. And nothing could be farther from the truth,” says Luis Fuentes-Rohwer, a law professor at Indiana University, who specializes in civil rights and legal history.

The ongoing battles over voter ID and gerrymandering in states like North Carolina, Ohio, Texas, and Georgia, Fuentes-Rohwer notes, are reminiscent of the purge of black voters after the Reconstruction and the racial turbulence of the 1950s and 60s that spurred the implementation of the Voting Rights Act in the first place.

“This is just history repeating itself,” says Fuentes-Rohwer. “This is not the first time this has happened, and there’s no reason it wouldn’t happen again.”

Many voter suppression and gerrymandering cases are now making their way through the system, and Trump’s nominees will play a big role in how they are decided.

Unfortunately, several of those nominees have troubling records in this area.

Take Thomas A. Farr, who is Trump’s pick for a spot on a US district court in North Carolina. WhoWhatWhy has written extensively about the many efforts of Tarheel State Republicans to disenfranchise African American voters and subvert democracy in other ways. Usually, Farr was not far from the action in those cases. 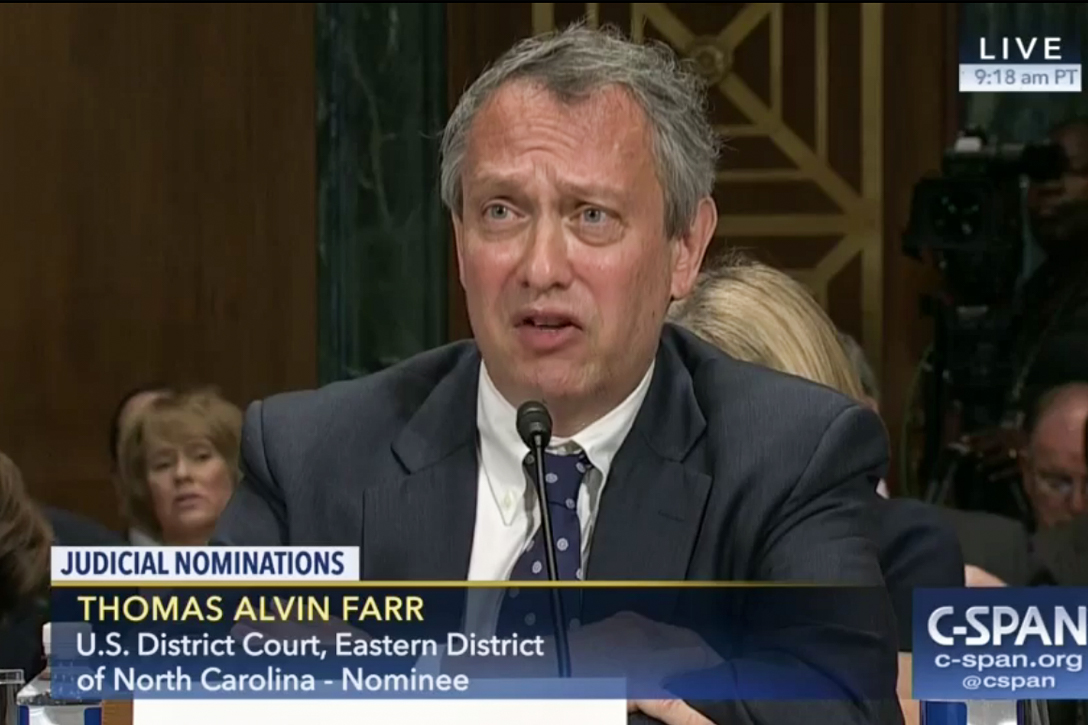 Dubbed “the legal architect of North Carolina voter suppression” by the Center for American Progress, Farr was “instrumental in creating and defending” the North Carolina voter ID law that was struck down after an appeals court determined the legislature had “targeted African Americans with almost surgical precision.”

The Raleigh-based attorney also defended the state’s Republican legislature in a recent US Supreme Court case that resulted in the state being reprimanded for having engaged in an unconstitutional racial gerrymander.

Going back even further, Farr defended Sen. Jesse Helms from charges that his 1990 re-election campaign tried to intimidate voters — after it mailed postcards to more than 100,000 African Americans, falsely informing them they were ineligible to vote and would face jail time if they attempted to do so.

Related: GOP Plan to Suppress the Rising Millennial Vote: How Will They Do It?

This is the third time Farr has been nominated for this seat — which encompasses 44 counties and includes the city of Raleigh. His first two nominations under George W. Bush, in 2006 and 2007, failed to come to fruition (neither nomination made it to a committee vote). And despite adamant opposition from the Congressional Black Caucus, the Senate Judiciary Committee has approved Farr’s re-nomination by a narrow margin (11-10), advancing it to a full Senate vote.

If approved, Farr will take over a seat that’s been kept vacant since 2005 by Republicans, who obstructed two separate Obama appointees.

Then there is Kyle Duncan, whom Trump nominated to sit on the 5th Circuit Court. Viewed as one of the most conservative appellate courts in the country, it actually delivered a recent voting rights victory by striking down a Texas voter ID law due to its discriminatory impact on black and Latino voters.

Duncan was on the other side of the issue. He wrote an amicus brief defending the law on behalf of state Republicans. It would be troubling if he were now to get a seat at the table, Allegra Chapman of the voting rights watchdog group Common Cause told WhoWhatWhy. 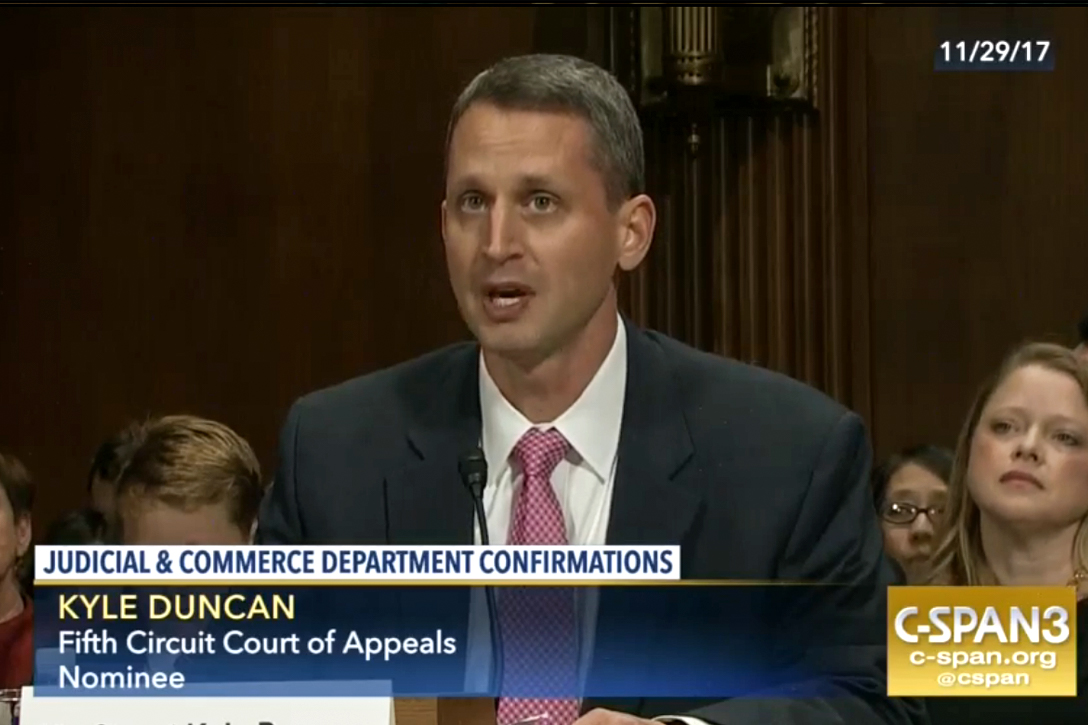 The progressive Alliance for Justice (AFJ) notes that Duncan, who had teamed up with Farr to uphold the racially discriminatory North Carolina voter ID law, “has spent his career … defending discriminatory voting laws.”

Another troubling choice is Mark Norris, who is awaiting confirmation to join a district court in Tennessee.

“Mark Norris has one of the most frightening and offensive records we’ve seen thus far among Trump judicial nominees, and that is saying a lot,” said AFJ President Nan Aron.

Norris, the Republican Tennessee Senate Majority Leader, who prior to his nomination was considering a gubernatorial run, was “an ardent supporter of a strict voter ID law” that the US Government Accountability Office estimates reduced voter turnout by as much as 3.2 percent — or 88,000 citizens. Hardest hit were African Americans, young registrants “between the ages of 18 and 23,” and new voters “who had been registered less than one year.”

Related: Voter Suppression May Be the Most Important Issue of 2018

Norris awaits full Senate confirmation after being approved in committee 11-10.

Then there is David Stras, nominated to fill a vacancy on the 8th Circuit Court of Appeals. The Minnesota State Supreme Court justice refused to intervene against a voter ID ballot measure that one fellow justice, in his dissent, said was “phrased to actively deceive and mislead.” 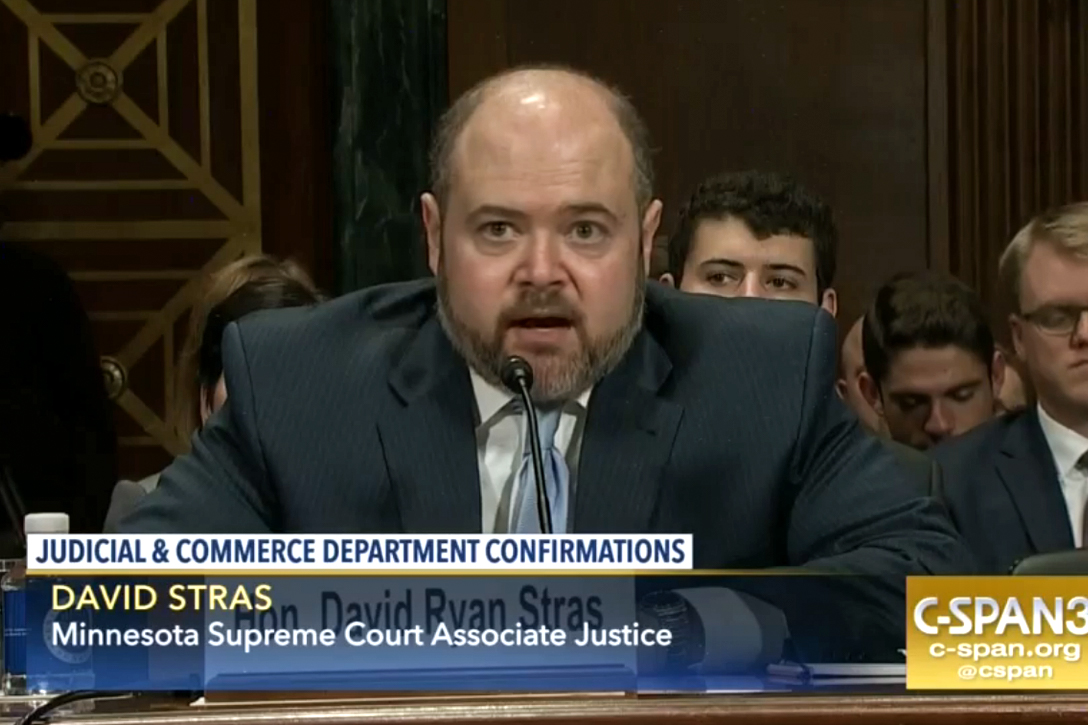 Like other Trump nominees, he did well to keep his positions to himself during Senate confirmation hearings, a strategy he called a “smart play” and “the smart political move” in the past.

The move apparently paid off, as his nomination was reported by the Judiciary Committee to the full Senate for a final vote.

Another Trump nominee with a less-than-inspiring history is Allison Eid. Eid was the only dissenting voice on the Colorado Supreme Court when it affirmed a lower court decision to create new districts in order to “maximize fair and effective representation for all citizens” and empower the Hispanic population by “allowing its voting bloc to carry significant weight in elections.” Her dissent, according to the Leadership Conference on Civil and Human Rights, “constitutes a misreading of constitutional principles.” 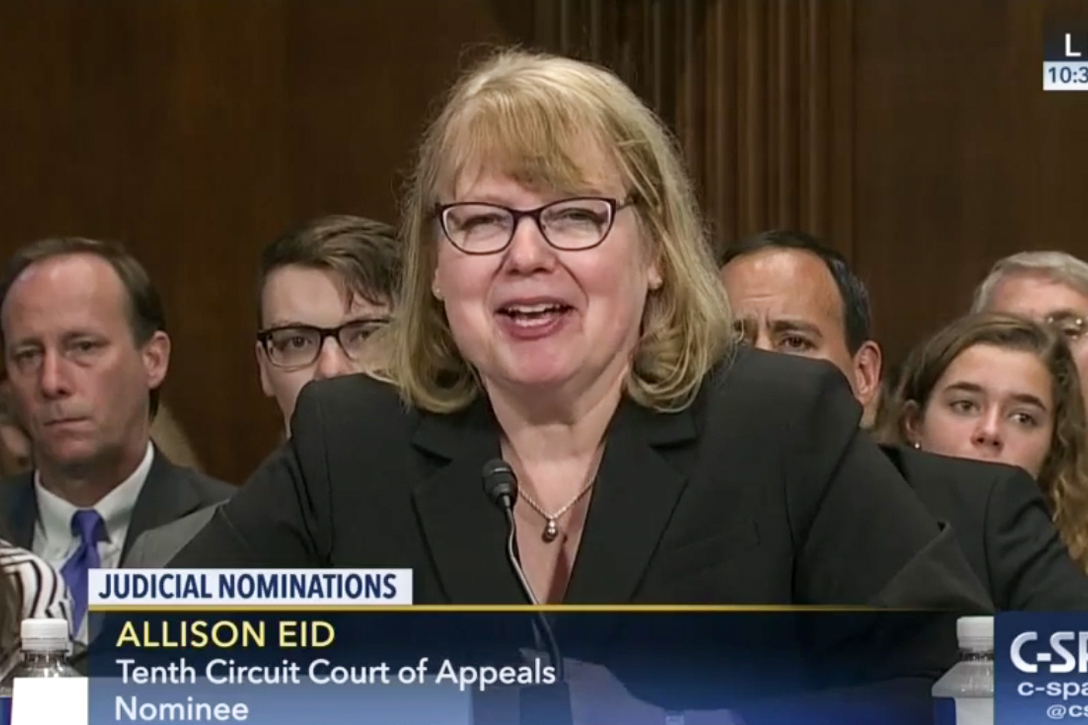 In addition, during her confirmation hearing, when asked to declare in writing whether or not she agreed with Trump’s baseless assertion that more than 3 million illegal votes were cast during the 2016 presidential election, she refused to condemn the patently untrue statement, saying, “any answer [she] could provide would be mere speculation.”

The confirmed Eid will take over the 10th Circuit seat left vacant by Neil Gorsuch’s promotion to the US Supreme Court.

And consider Don Willett — who has bragged “There is no ideological daylight to the right of me,” and crowned himself the “most conservative justice” on the Texas Supreme Court. While he was working under the state Attorney General, Willett helped defend Texas redistricting plans on two separate occasions against charges of Voting Rights Act violations. 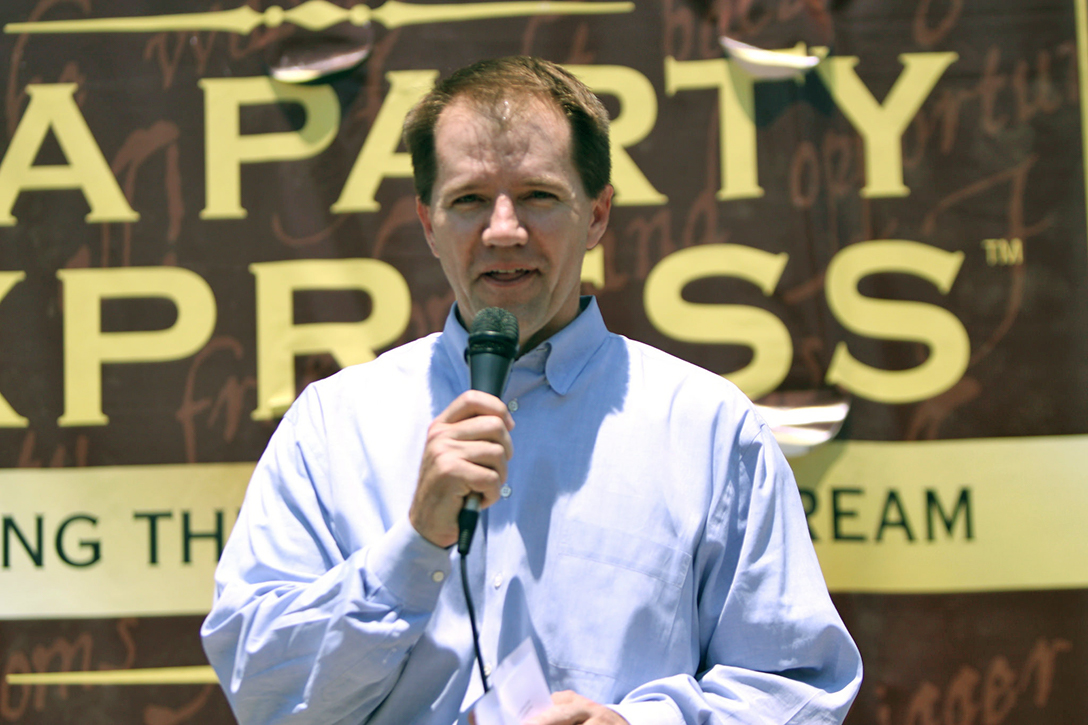 On the first occasion, Willett drafted a brief for the US Supreme Court calling for the case to be dismissed (eventually, it was). Willett assisted with trial preparation for another similar case, but by the time the Supreme Court finally got around to striking down the gerrymander for the violation and for effectively weakening Latino voting power, Willett had left office.

Willett has been confirmed for a seat on the 5th Circuit Court of Appeals.

Then, of course, there’s the most visible of Trump’s appointments: Neil Gorsuch.

It may be too early in his Supreme Court tenure to know what’s to come, but that hasn’t immunized the latest appointee to the highest court in the land from criticism. 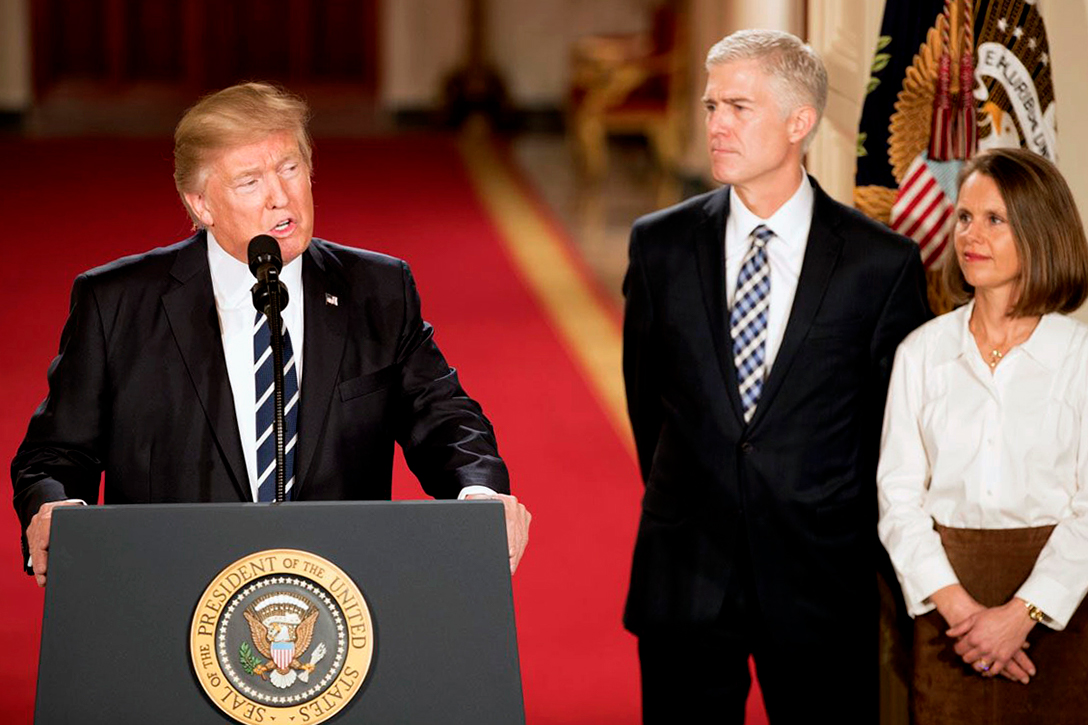 President Donald Trump introduces Gorsuch, accompanied by his wife, as his nominee for the Supreme Court at the White House on January 31, 2017. Photo credit: The White House / Wikimedia

“In Gill v. Whitford, Gorsuch’s conservative views on voting rights were evident,” AFJ spokesperson Laurie Kinney told WhoWhatWhy. “He openly questioned whether the federal government had the constitutional authority to protect voting rights in states whose legislatures have egregiously gerrymandered.”

“Luckily,” Kinney wrote via email, “Justice Ginsburg was there to rebuke him.”

In a pointed retort, Ginsburg asked Gorsuch, “Where did ‘one person, one vote’ come from?” In doing so, she meant to remind him that the Court had interpreted the First and Fourteenth Amendments to allow just this sort of intervention decades ago.

One response to “Will Trump’s Judges Set Back Voting Rights?”