The FBI says it can’t crack the iPhone.

FBI Director James Comey is no fan of the latest iPhones.

In fact, where millions around the world are drooling over Apple’s latest mobile phone, Comey sees a “black hole” where criminals can hide beyond the reach of the FBI. Public safety, of course, is at risk from this phenomenon that Comey dubbed “Going Dark” in the very same speech in which he proclaimed that he is no scaremonger.

The newest hobgoblin we’re being asked to fear is the advanced encryption in the iPhone and Google’s Android devices. It is so strong that the FBI can’t break it and the companies themselves can’t get in, so it’s like a closet that can’t be unlocked, Comey said. And the FBI needs to be able to break it when it has a court order, or else criminals and terrorists might get away.

Apple and Google are reacting to market demand for greater privacy caused by Edward Snowden’s revelations of NSA snooping. But “the place they are leading us is one we shouldn’t go to without careful thought and debate as a country,” he said.

That’s a statement hermetically sealed off from history, since we have been down this road before. And privacy won. It’s also out of touch with the present state of encryption technology, and the FBI’s own prior public stance toward data protection.

Start with this fact—encryption tools exist in myriad forms, free to anyone with an Internet connection. And the FBI is on the record encouraging people and businesses to use it to protect their personal and business data from foreign hackers and governments. As well it should be, since there have been three major data breaches this year including one into the faux Fort Knox cybervaults of J.P. Morgan.

So why target Apple and Google? To make life easier for FBI agents who are stuck with what Comey called inefficient and costly legal means of investigation. If companies build encryption with no means of interception, it would leave “the government at a dead end—all in the name of privacy and network security,” Comey said. 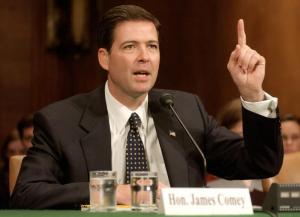 It’s notable that Comey made this assertion the centerpiece of his first law-enforcement policy speech, delivered today at the Brookings Institution and perfunctorily leaked in advance to the New York Times.

The speech is part of a growing drumbeat from the national security machinery that claims that encryption is, like any threat the government decides to describe as the new Godzilla, a mortal one. Comey is preparing to ask Congress to change the wiretap laws to reflect modern technology, so his motive is abundantly clear.

You’ve got to give Comey credit—he employed the phrase “FOMO,” or fear of missing out, to make his case:

With Going Dark, those of us in law enforcement and public safety have a major fear of missing out—missing out on predators who exploit the most vulnerable among us…missing out on violent criminals who target our communities…missing out on a terrorist cell using social media to recruit, plan, and execute an attack.

Then he described a series of cases where encryption could have prevented arrests. Among the crimes he mentioned were two involving children: a beating death of a two-year-old girl and the murder of a 12-year-old by a known sex offender.

To be sure that never happens, the FBI needs a front door—not a back door—that Google, Apple and others should provide, Comey said.

The notion that the marketplace could create something that would prevent that closet from ever being opened, even with a properly obtained court order, makes no sense to me.

It does make sense, however, to the companies in Silicon Valley, which went through a similar debate two decades ago. Back then, the government proposed the “Clipper chip” backdoor and lost the battle resoundingly. Now, federal law explicitly protects the right of companies to create encryption without a backdoor.

“We have, as a country, decided that people should be able to encrypt their information and should be able to control it,” Jeremy Gillula, a staff technologist with the Electronic Freedom Foundation, told WhoWhatWhy. Comey’s attempt to reopen the debate is unfortunate, he said.

The EFF in the 1990s litigated the landmark case which established that encryption programs are protected speech under the First Amendment. Prior to that, encryption technology was classified a munition subject to government regulation.

Nothing to Fear But FOMO Itself

The stakes for Silicon Valley are higher this time around, because of the impact of the Snowden leaks. The loss of confidence in American companies as a result may cost them as much as $35 billion in the next two years.

And as others have pointed out, if American companies buckle to U.S. government demands to weaken privacy protection, countries with no privacy protections will demand similar access. That would in turn cause an even greater erosion of consumer trust.

That didn’t stop Comey from arguing that the citizenry has nothing to fear from U.S. government privacy intrusions, because they will be lawful and only done with a court order—unlike in the past. The public is now too distrusting of government to have a debate about privacy versus security, he said.

Perhaps it’s time to suggest that the post-Snowden pendulum has swung too far in one direction—in a direction of fear and mistrust.

But what about the government’s role in carrying out wholesale surveillance? Did Comey mention that? No.

Comey closed in asking: “Are we so mistrustful of government—and of law enforcement—that we are willing to let bad guys walk away…willing to leave victims in search of justice?”

It’s a perfect ad hominem argument to deflect blame away from the goverment: is the public willing to give up more privacy to ensure no baby-killers and terrorists get away?

A better question is whether the FBI is willing to work harder to investigate with the ample surveillance arsenal it has, instead of asking for another dilution of privacy in the name of safety.