Russia’s Ukraine Maneuvers May Be a Push Toward … Peace - WhoWhatWhy
Reading Time: 6 minutes 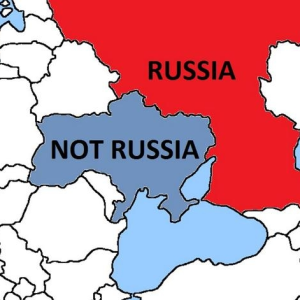 Ukraine: Up for Debate.

Russian President Vladimir Putin is waging peace his own way in Ukraine, despite a chorus of accusations from the West that he is acting aggressively.

Make no mistake, Russia is still backing Ukraine’s separatist rebels. And fighting, though subdued, still continues in eastern Ukraine between the rebels and government troops. That’s even after Putin and Ukraine President Petro Poroshenko formalized a ceasefire.

But there are concrete steps toward an agreement that will give Russia some of what it wants. For example, Ukraine’s parliament voted to give a three-year period of limited autonomy to the breakaway eastern regions. If the ceasefire holds, Russia may find itself freed from new EU sanctions, which have sent its currency tumbling to a record low.

The worst-case scenario of renewed large-scale violence is receding as a possibility. Yet the danger of a frozen conflict that could turn hot at any point remains. Besides, an energy and trade war with unpredictable results looms unless a comprehensive solution to the crisis is crafted.

This last part may be the key to understanding why Moscow is swinging a big stick while speaking softly about the need for negotiation and the preservation of Ukraine’s territorial integrity. It has everything to do with the difference between the Russian idea of making peace and the Western conception of it.

The fact that Russia translated the concept of “peacekeeping forces” into its language as “peacemaking forces” is still something of a dark joke in Eastern Europe. There, people not-so-fondly remember how Russian tanks rolled in to “pacify” Hungary in 1956 and then-Czechoslovakia in 1968.

The muscular Russian manner of making peace is on full display now in Ukraine. Despite his denials, Russian President Vladimir Putin appears to be pushing brinkmanship to the limit, ultimately in the pursuit of an agenda to stake out some of Russia’s old turf.

But Putin’s maneuvers have been matched by the more hawkish elements of Ukraine’s coalition government and their allies in the military forces.

It’s easy for Russia to point an accusing finger at a series of actions that are hard to defend in the name of peace and democracy. Those include the indiscriminate artillery shelling of one’s own cities and the unleashing of heavily armed neo-Nazi gangs on one’s own population, or the trampling of press freedoms.

In this context, the “slow-motion invasion” of Ukraine of which Putin has been accused may well be his best attempt to force Kiev into a lasting ceasefire and an agreement to keep natural gas flowing. That plan has the apparent backing of Germany and possibly others. 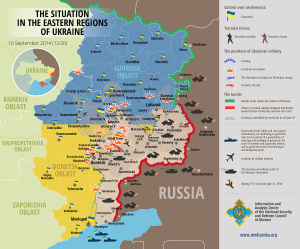 That a bigger deal than the ceasefire is in the works is evident from the muted responses of the U.S. and the EU to elements of the Ukraine conflict that could easily be manipulated into a casus belli. Both have been cool to the Ukrainian government’s pleas for support and allegations that at least 1,000 Russian troops invaded Ukraine, leading to a rebel counter-offensive that forced the Ukrainian army into  chaotic retreat.

There are many signs from the U.S. and EU demonstrating that negotiation is afoot, in spite of the tough talk about Russian aggression.

You couldn’t be blamed for thinking otherwise, though, if you listened to NATO’s pronouncements. The latest is the urging of U.S. Air Force Gen. Philip Breedlove, NATO’s Supreme Allied Commander in Europe, to reverse a planned reduction of NATO forces in Europe.

On the other side, Moscow has denied every Western allegation about military involvement on Ukrainian soil. That’s despite NATO-provided evidence of Russian artillery emplacements, Russian soldiers returning home in coffins and the presence of at least one T-72 tank variant that’s never been exported. The closest Russia has come to an admission of involvement—since Crimea—is acknowledging that 10 of its paratroopers may have gotten lost and crossed into Ukraine.

Of course, any allegation by an interested party, be it Russia or a Western government, should be treated with proper skepticism. And that’s all the more important in a situation that reeks of propaganda and disinformation.

So it pays to read between the lines very carefully.

Western officials have carefully avoided calling the event an invasion, but rather an incursion. That designation carries lesser weight in international law, and frees Europe from having to act more forcefully. Still, the EU imposed a new round of sanctions on Russia after the ceasefire. At the same time, it offered the possibility of cancelation in October if the truce holds.

The delicacy of the diplomatic efforts also explains why Ukraine failed in its quest for NATO membership at the alliance’s summit this month.

Parts of the agreement that Russia and Germany worked out are materializing. Those include the truce and some form of autonomy for the eastern regions, which is being dubbed decentralization. (There has been a debate about the precise term to use among Germany’s leadership.)

What’s left is a comprehensive gas deal that would help stabilize the devastated Ukrainian economy and allay European fears of disruptions in their supply from Russia, a source about a third of it. (For an analysis of the gas politics behind the conflict, please click here)

Though a compromise, the deal would be a considerable accomplishment for Russia and Putin. It would allow him to claim victory (federalization of Ukraine was the original demand of the rebels). And it would spell the end of sanctions, relieving economic pressure at home.

It could also go a long way toward causing a split between Germany and the U.S. Prying those allies apart has been a long-standing Russian strategic objective. Germany was trying to massage the reluctant Ukrainian government into accepting the draft agreement since before the ceasefire. At the same time, the U.S. ramped up its rhetoric for a more robust NATO and was considering granting Ukraine the status of a major non-NATO ally.

The European Union, for its part, seems to be primarily concerned about money. Estimates of the EU’s cost for the sanctions are in the tens of billions. Several Eastern European countries have already started campaigning against them.

Then there is the approximately $19 billion that it will cost to prop up Ukraine’s economy for a couple of years. Russia, eager to preserve its traditional influence in Ukraine and faced with far greater financial losses should Western sanctions continue or worsen, could well be forthcoming with financial aid.

So a peace deal with Russia is proving to be more and more essential to Europe.

That’s why the Ukraine and the EU ratified a free trade deal but allowed Kiev to delay its reciprocal tariff reductions for a year. Russia, fearing that its markets would be flooded with cheap European goods, had threatened to retaliate.

Tellingly, a joint statement from the EU, Ukraine and Russia said the trade deal “needs to be part and parcel of a comprehensive peace process in Ukraine, respecting the right of Ukraine to decide on its destiny as well as its territorial integrity.”

Putin has undoubtedly gambled by apparently sending troops into Ukraine. There is still a chance that he bet wrong, and will end up with a protracted ground war with international repercussions and considerable financial pain to both Russia and the EU.

The situation could still spiral out of control. Two possible aggravating factors: if the extreme right in Ukraine makes significant gains in parliamentary elections next month, or if the trade war escalates. Britain, for example, has called for blocking Russia from the SWIFT interbank system, something that experts have dubbed a “financial nuclear option.”

Russia meanwhile has warned that the recent round of sanctions could endanger the fragile peace between the unruly militias on both sides in eastern Ukraine.

Still, Putin has no shortage of levers to push forward his muscular brand of peacemaking. As the winter approaches—a time when gas demand in Ukraine and the EU soars—he is likely to gain even more.

“The goal of the rebels is to hold out for just two more months,” said Vesselin Avraamov, an independent analyst in Bulgaria who focuses closely on Russia. “Once winter approaches, Ukraine will be dead without Russian oil and gas.”