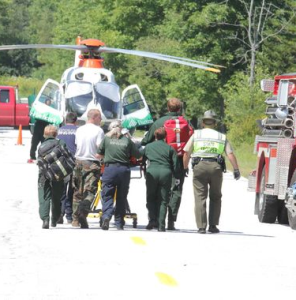 But we think that journalistic rigor warrants a close look at misfortune befalling people in sensitive positions, even when there is a reasonable possibility that there is nothing more to learn. You can read our first article here.

Now, we’d like to update you on two key points, and then on some other curiosities.

First: local Vermont media are reporting that, just prior to his crash along a relatively straight and flat portion of a rural stretch of Vermont Highway 12, Freeh, 64, nearly took out three motorists, whose evasive actions saved themselves.

Second: a still unidentified FBI agent quickly materialized at the scene of the crash.

Vermont’s largest newspaper, the Burlington Free Press, provided the following coverage, citing one of the drivers whose quick action saved their lives:

The driver, Van Coleman, gave a written statement to a Windsor County deputy sheriff, who was the first police officer on the scene of the Aug. 25 crash of Freeh’s vehicle. Deputy Sheriff Justin Hoyt said he gave the eyewitness report to state police.

A motorcyclist and two cars needed to swerve into the left lane when Freeh’s vehicle crossed the center line on Vermont 12 in Barnard and headed at the trio at a high rate of speed, Coleman told the Burlington Free Press.

Freeh “was doing about 60 to 65 miles per hour and was on the left side of the road,” Coleman said. The speed limit was 50 mph.

Coleman said the northbound motorcyclist, who was first in line, moved to the left to avoid the SUV coming in the wrong lane. Another car also swerved left before Coleman followed suit in his Honda, he said.

None of this information about Freeh’s behavior has been provided to the public by the government—so we have the local media to thank for its diligence.

The Free Press provides claims by various Vermont officials that they themselves did not have the information to release.

State police were criticized for trying to keep the crash under wraps for 24 hours. A video crew for Fox44/ABC 22 in Colchester and a photographer from a local weekly newspaper in Woodstock were at the scene, but they were told a news release would be issued the following day.

Instead, FBI sources in Washington told NBC News that Freeh had been in a Vermont crash. The Vermont State Police issued a news release more than eight hours after the wreck and only after multiple calls by local and national media.

A still unidentified FBI agent was one of the first people to arrive at the accident scene, according to police. He was apparently from out of state. What he was doing there is still not clear. Police believed him to be off-duty, but could not say with certainty.

Students of history will note the many instances in which FBI have shown up at sensitive accident/crash scenes with great haste—sometimes seemingly surmounting formidable obstacles, and sometimes arriving in force that would seem impossible based on actual local staffing.

One of many examples where FBI swarmed a crash scene was the 1972 Chicago plane crash that killed Dorothy Hunt, a former CIA officer and wife of the embattled CIA officer and Watergate burglar E. Howard Hunt, while she was cooperating with a journalist on inquiries into Watergate. The FBI took over the investigation, prompting complaints from the National Transportation Safety Board, which has statutory responsibility for such air disaster probes. (A detailed review of the incident can be found in Carl Oglesby’s Yankee and Cowboy War.)

Freeh himself was involved in a similar accident scene takeover, following the downing/crash of TWA flight 800 over Long Island. Freeh commandeered the investigation from the National Transportation Safety Board right after the incident in July 1996. Once the FBI took over, the NTSB was denied access to witnesses (see Aviation Week, Dec. 15, 1997; paywall).  That August, chemists at the FBI crime lab found traces of PETN, a component of bombs and surface-to-air missiles.  Yet, in November 1997, the FBI closed the investigation for good, claiming no evidence of a criminal act had been found.  There has never been a follow-up investigation of this case. (For more, see the documentary by WhoWhatWhy contributor Kristina Borjesson.)

“His Head Was Down”

What happened to Freeh on August 25 when his 2010 SUV left the highway, and hit a tree? Here’s the Free Press again:

“His head was down, so I thought he had fallen asleep,” Coleman, the witness, said as he reflected on what he saw before Freeh crashed.

“I think he was totally out. He made no attempt to stop,” said Coleman, who spoke initially to the News & Citizen newspaper, a weekly in Morristown.

It’s important to remember that this happened shortly after noon, and not terribly far from Freeh’s vacation home, not typical circumstances for a driver to have fallen asleep.

Freeh and his staff have been mum on the whole thing; the FBI has provided no details or explanation. And law enforcement has not appeared to be especially zealous in figuring out what happened. As the Free Press reported on Sept 3:

Earlier state police had said there was no evidence that drugs or alcohol were a factor in the Aug. 25 crash.  That was based on personal observation, no probable cause and a lack of suspicion,” Keefe said in explaining why no test was administered.

And AP reported on Sept 4:

State Police Capt. Ray Keefe said police did not consider if Freeh was using a cellphone before the crash, and did not examine his phone, because the accident was not consistent with one of a distracted driver; no brake or swerve marks were left on the road.

The Vermont State Police said they found no sign that his car had been tampered with. That is also what police said about the one-car crash of national security journalist Michael Hastings. Of course, police see more accidents than most people and rarely say a car has been tampered with. That’s mainly because most cars are not involved in accidents because of tampering.

Freeh is, or was, under armed guard at Dartmouth-Hitchcock Medical Center, a hospital in neighboring New Hampshire that is considered among the top hospitals. It routinely has very tight security, so the reason for the extra precautions is not clear.

There is the possibility that the law enforcement agencies involved with Freeh’s car crash are treating it with kid gloves because Freeh was one of their own. Although it happens less and less nowadays, there is ample history of fellow law officers giving special treatment to cases involving someone else who carries a badge. The fact that Freeh once held the biggest badge in the land could also be playing a factor.

Freeh, with his knowledge of details concerning controversial major security events that have not been, in many people’s minds, satisfactorily explained—including 9/11, TWA Flight 800, Oklahoma City, Ruby Ridge, Waco, investigations of the Clintons and more—is in a sensitive position. If his accident was, in the opinion of the FBI, not an accident, then they would conceivably have a reason to be concerned for his safety.

Ultimately, however, Freeh, a man who headed an agency famous for being tight-lipped, is unlikely to share his thoughts.