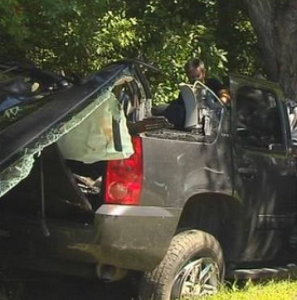 Any serious student of history is on alert for “interesting accidents.” Because sometimes they are accidents. Sometimes, they’re not.

We have no opinion at the moment on the one-car-wreck that left former FBI director Louis Freeh badly injured around noon on August 25, other than to note some curious facts: the police were hours late informing the office of the governor of Vermont; Freeh was flown by helicopter to the Dartmouth-Hitchcock Hospital in New Hampshire under armed guard, and has remained under armed guard; the hospital has refused to confirm that he is a patient, even after reports of two surgeries; at least for the first few days no one has answered the phones at his company, Freeh Group International.

was headed south on Vermont 12 in his 2010 GMC Yukon when he drove off the east side of the road. The vehicle struck a mailbox and a row of shrubs, then came to rest against the side of a tree, police said…

Louis Freeh epitomizes the risks attendant in a president’s decision to demonstrate bipartisanship by appointing or re-appointing figures associated with the opposing political party and/or prior regime. He also embodies the troubled legacy of the Bureau from its earliest days. (For a look at how the U.S. media cooperated with the Bureau to misleadingly burnish its image, see this)

Louis Freeh was appointed by George H.W. Bush to the federal bench in 1991. In the first year of Bill Clinton’s presidency, Clinton named Freeh head of the FBI.

Right from the start, the Freeh FBI was drenched in controversy. The “screw-ups” were legion—from the exposure of fraudulent FBI crime lab results to the wrongful blaming of an innocent man for the bombings at the Atlanta Olympics—to the bloody standoff and shootout at Ruby Ridge.

Freeh vs the Clintons

In order to move the heat off himself and his agency, Freeh made political peace with Newt Gingrich and his firebrand GOP Congressional operation, deflecting the political pressure back onto the White House. He did this via a Campaign Finance Task Force under the auspices of his parent agency, the Justice Department, established in December of 1996 after Clinton’s re-election. This became, prior to 9/11, what some say was the largest federal investigation in U.S. history.

Over 300 FBI agents were assigned to the investigation, which targeted both Clinton and Gore. No one was ever indicted but a steady drip of leaked stories pounded Gore particularly—feeding the damaging story line that he was a captive of the China Lobby and possibly even compromised by certain foreign intelligence services. This long-simmering PR crisis did serious damage to Al Gore’s prospects in 2000, and thereby aided the campaign of George W. Bush, son of Freeh’s original sponsor.

Freeh, the Saudis and Terrorism

Even more fraught was Freeh’s behavior during the investigation of the massive bombing of U.S. military facilities at the Khobar Towers development in Saudi Arabia. According to the former counterintelligence officials Daniel Benjamin and Steven Simon in the book The Age of Sacred Terror, Clinton foreign policy officials felt that Freeh was deeply influenced by the Saudi power structure.

Eventually, Freeh, according to the authors, called the elder Bush and asked him to intervene with Crown Prince Abdullah to allow FBI agents to watch through a one-way mirror while Saudi agents questioned Khobar bombing suspects. They allege that he ignored the chain of command and Clinton’s National Security Council in bringing Bush Sr. into these sensitive negotiations.

In his memoirs, Freeh claimed that Clinton suspected the Saudis, while suggesting that he himself was convinced that Iranian operatives had executed the bombing. (It’s important here to note the Bush family’s long and close ties to the Saudi royal family and the political agenda at work in shifting blame to the hated Iranians.)

Freeh also curtailed FBI agent John P. O’Neill’s investigation into a possible Al Qaeda role in the Khobar bombing and the later attacks on the USS Cole in Yemen. Freeh even pulled O’Neill out of Yemen during the Cole investigation. By transferring O’Neill to New York City, Freeh sided with U.S. Ambassador Barbara Bodine, a Clinton holdover in the new Bush administration, and with Saudi officials who wanted O’Neill out of their way. The aim, it appears, was to shield certain suspects (and any possible sponsors) from over-zealous American investigators. Later, Freeh thwarted O’Neill’s efforts to become head of the FBI NYC field office.

In an extraordinary turn of events, John O’Neill died in the destruction of the Twin Towers—which were allegedly brought down by a group of hijackers dominated by Saudi nationals.

If he dared, Louis Freeh could shed a great deal of light on two decades of frequent security emergencies that have led to the greatest buildup of state power in the history of the United States—and limited Americans’ freedom and privacy as never before. Freeh’s strange crash—like most such incidents (see the bizarre one-car crash that killed national security reporter Michael Hastings) – will almost certainly be explained as a flukish accident.

And Freeh, the lucky survivor, is unlikely to volunteer to spread truth about the crash, or any of the other curious events in which he has been involved as the consummate intelligence-establishment insider.

[box] WhoWhatWhy plans to continue doing this kind of groundbreaking original reporting. You can count on us. Can we count on you? What we do is only possible with your support. Please click here to donate; it’s tax deductible. And it packs a punch.[/box]

38 responses to “Curious Car Crashes: Louis Freeh, The Man With The Secrets”