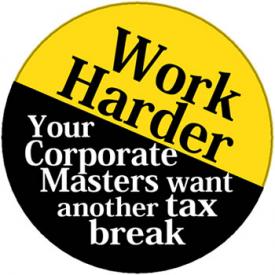 Whew! We’ve managed to pull ourselves back up the fiscal cliff and to crawl a few inches away from that terrifying ledge. As we take a short breather from the serial drama, let’s see if we can get a little perspective on this made-for-media spectacle.

One little-noticed and little-reported, though hugely significant aspect, brought out by Timothy Carney, a columnist for the conservative Washington Examiner website, is the extent to which the White House and like-minded individuals of both parties pushed to include a bunch of tax breaks for the big guys.

The “fiscal cliff” legislation passed this week included $76 billion in special-interest tax credits for the likes of General Electric, Hollywood and even Captain Morgan. But these subsidies weren’t the fruit of eleventh-hour lobbying conducted on the cliff’s edge — they were crafted back in August in a Senate committee, and they sat dormant until the White House reportedly insisted on them this week.

Now, while Carney deserves credit for pointing out this hidden dimension of what was presented as the White House doing the honorable thing, it’s actually a little more complicated. Many of the interests who back Carney-style reporting are less bothered by big breaks for big corporations than animated by the opportunity to undercut other subsidies that might actually benefit the public—especially if those subsidies can be tagged with easily ridiculed labels.

We find a hint of this in his phrasing:

The Family and Business Tax Cut Certainty Act of 2012, which passed through the Senate Finance Committee in August, was copied and pasted into the fiscal cliff legislation, yielding a victory for biotech companies, wind-turbine-makers, biodiesel producers, film studios — and their lobbyists. So, if you’re wondering how algae subsidies became part of a must-pass package to avert the dreaded fiscal cliff, credit the Biotechnology Industry Organization’s lobbying last summer.

And in this brief mention:

…Meanwhile, House Republicans signaled resistance to some of the extensions — especially for green energy.

It is easy enough to mock windmills and algae to the ill-informed. But let’s not be so hasty. There’s a very good reason to subsidize research and early production work on algae as a fuel. In fact, another conservative entity, the free-market Heartland Institute, ran a column that emphasized the possible benefits from helping develop algae’s potential.

A 2010 report from the Department of Energy, cited in that column, noted that

“several aspects of algal biofuel production that have combined to capture the interest of researchers and entrepreneurs around the world.  These include: (1) high per-acre productivity, (2) non-food-based feedstock resources, (3) use of otherwise non-productive, non-arable land, (4) utilization of a wide variety of water sources (fresh, brackish, saline, marine, produced, wastewater), (5) production of both biofuels and valuable co-products, and (6) potential recycling of CO2 and other nutrient waste streams.”

The DOE report, taken seriously by Heartland’s columnist, warns that, despite this great promise, “many years of both basic and applied science and engineering will likely be needed to achieve affordable, scalable, and sustainable algal-based fuels.” Oh, and corn and plenty of other, more mainstream crops, have long been propped up by Washington.

The Luxuries of Cliffside Living

Much more problematical—and much more costly—than the subsidies for funny-sounding but potentially important research projects are the benefits scored by outfits like General Electric.  Its chief, Jeffrey Immelt, has arranged a particularly charmed life for himself and his company, thanks in part to his very close relationship with President Obama. He’s managed the neat trick of sending jobs overseas at breakneck pace whilecollecting lucrative US tax breaks. Obama cheekily named Immelt chairman of the President’s Council on Jobs and Competitiveness. Hope we don’t need to place an exclamation mark on that one. Or on the fact that the council has not met for a full year. (For a bit more on GE and its good citizenship record, see this and this.)

As if the GE chairman’s status as good friend to the president of the United States isn’t enough, GE went bipartisan by hiring two former senators, John Breaux (D-LA) and Trent Lott (R-MS), to lobby for the extension of tax provisions that keep Immelt and his biggest shareholders in yachts and other perks of the 1% life-style.

General Electric and Citigroup, for instance, hired Breaux and Lott to extend a tax provision that allows multinational corporations to defer U.S. taxes by moving profits into offshore financial subsidiaries. This provision — known as the “active financing exception” — is the main tool GE uses to avoid nearly all U.S. corporate income tax.

One thing you can count on with those reports from conservative sites—they will generally mention examples that appeal to their funders and constituency. But it isn’t just environmental causes and friends of Obama who benefited from the political deal-making. If you read Matt Stoller of the liberal Roosevelt Institute, writing on the site Naked Capitalism, you would learn something quite different. You’d find out that, closer to the looming fiscal cliff deadline, i.e., in November and December, a bunch of other interests got into the act, landing $205 billion in tax breaks. Stoller lists various tax subsidies that benefited corporations and banks in general—many of whom preferred Romney to Obama. Among those he mentions, besides the universally loathed Goldman Sachs, are railroads, mining companies, and the Red State favorite, NASCAR.

So, if we’re going to pick on liberal-sounding culprits like the algae-to-fuel industry, “Hollywood”, and some sinister drink like Captain Morgan’s (with the eponymous pirate on the label!), we ought to point out the broad range of traditional business interests pushing us all closer to that cliff we hear so much about but understand so poorly.