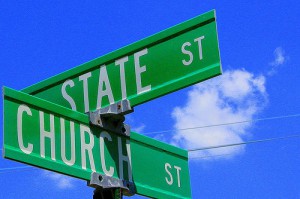 The GOP candidates’ struggle to outdo each other in appealing to Christian fundamentalists continues. Rick Santorum, the current favorite of this constituency, topped his previous plays with his remark that John F. Kennedy’s famed 1960 speech on the importance of a separation between religion and government “makes me throw up.”

The separation of church and state is not some abstract notion, nor is it a means of oppressing people. It very reasonably keeps people from imposing their religious beliefs on other people. These are not beliefs that can be objectively measured or empirically tested—like, say, the hypothesis that public spending can affect employment levels. Religious beliefs may be comforting or helpful to some people, but no matter how deeply felt, they can have no place in a rational, shared system of managing outcomes for all Americans.

Yet because of the current political climate in this country, we’re not supposed to talk about any of that. The other day, the New York Times op-ed columnist Charles Blow got in a little trouble. He tweeted an admittedly rude and rather inappropriate remark about an eccentric element of Mitt Romney’s faith—the belief that wearing special underwear literally protects the person from harm.

Blow was hit with a barrage of criticism, and quickly apologized—which makes sense given the contextual irrelevancy and vulgarity of the comment. As a proud single parent, he was responding to a remark of Romney’s implying that single-parenting is per se bad for kids, and he should have stuck to that point in his rejoinder.

But that doesn’t mean that Romney’s avowed Mormon faith is incidental to his view on single-parenting or that a candidate’s religion is always out of bounds in political discourse.  There are a number of valid questions that can be asked about practices of the Mormon Church, and their potential impact on policy decisions of a political leader of that persuasion.

One question would be about the effect of Mormon missionary work around the world, at a time when people of other faiths may strongly resent the presence of people trying to convert their children to a faith so clearly identified with American interests.

Another would concern the repeated, pernicious practice of posthumously baptizing Holocaust victims—obviously without their permission and presumably against what would be their wishes. Stephen Colbert made this point when he tweeted: If Mormons Posthumously Baptize Holocaust Victims, I’ll Posthumously Circumcise Mormons

Making fun of religious beliefs is intellectually pointless since such beliefs by definition are beyond rational argument. (“Faith” is what you proclaim when you have no objective evidence for a particular belief.) Yet there’s an inherent double standard in the way we chuckle about Scientologists and “Xenu” or various cults that bubble up before quickly disappearing, when one could argue that, empirically, all beliefs about miracles, supernatural interventions in the natural course of events, etc. are delusions designed to comfort us in times of trouble—or distract us from the recognition that if we act in concert we can make life better by and for ourselves.

At the same time, questioning religious belief systems in terms of how they affect other people is certainly legitimate—a lot more legitimate than the subtly racist rhetoric aimed at Barack Obama. Clearly, we don’t choose what race we are born into, or what nationality, or even what religion. However, we certainly do decide, as adults, the values and beliefs we live by—whether or not they match what we were taught as children.

The fact is, we shouldn’t ridicule or question people for attributes or circumstances that are beyond their control, and that certainly includes their ethnicity. For example, an ESPN writer was rightly fired recently for the mobile headline “Chink in the Armor,” about the Chinese-American basketball player Jeremy Lin.

But when someone consciously embraces a particular religion and set of tenets, then asks to be selected to run this country, those beliefs could be seen as relevant—for praise or criticism, or even humor. That’s part of a vigorous discussion, and central to freedom of speech. Also, those who seek public office in a country where declared religious beliefs are at or near the center of the discussion of values can, and should, expect scrutiny and even criticism of those beliefs.

Now, Stephen Colbert is a humorist, so he has special license, but, really, isn’t the practice of posthumously baptizing those who would not have wished to be baptized something that can be discussed? And, given that Romney allots a substantial portion of his income to the Church of Latter Day Saints, why is it not okay to examine this practice and wonder what it says about prospective President Romney? If a leading candidate was a Muslim of any stripe, or, say, a Hasidic Jew, we would expect close scrutiny of what those beliefs entailed and what they might say about the values and likely actions of a future president (concerning, for example, the reproductive rights of women). Because if one’s religious beliefs have nothing to do with practical matters—well, why have them? And why tell others about them? And why reference them, explicitly or implicitly, when one seeks votes?

And what of the practice of other public figures—athletes, entertainers, etc.—choosing to openly draw attention to their beliefs? These figures inject their faith into the public arena as part of their brand. Does that make them fair game for criticism of those very beliefs? If so, should only those who explicitly draw attention to their beliefs face scrutiny? What about people who proclaim belief in religions that explicitly discriminate against other citizens – as official policy of the Church of Latter Day Saints did against blacks until 1978 and as the Catholic Church and other religious institutions do today against gay people? If a person’s faith has consequences that impact other people, why should that faith be out of bounds for public discussion?

Some of the online criticism of Charles Blow, an African-American, came from those who couched their protests in an overtly racist manner. Why do those critics think that skepticism toward religious beliefs is somehow worse than racism—or than the kinds of comments routinely directed at those from other backgrounds and countries that don’t fit into an America-centric, Christian-centric world view? What about the ways in which at least some of the Republican candidates implicitly but very obviously take swipes at those who are different through constant references to “American values” and “Christian values”?

Is the idea of special non-armored undergarments providing protection more or less credible than believing that one goes to heaven and is provided with sensual pleasures, including 72 virgins? Or the attitude toward the deity that prescribes the yarmulkes and tzitzit worn by religious Jews? Or ostentatiously displayed crosses, or anything else of this nature? Can someone’s belief in anthropogenic Climate Change more legitimately be attacked or ridiculed than faith in a God—who believers insist— would never let environmental harm come to his chosen flock (unless and until he deemed such punishment appropriate)?

In fact, isn’t the battle over religious beliefs and the secular practices they influence a central part of our political debate today? Isn’t evidence of anti-scientific, superstitious views a legitimate consideration when we choose whom we want to administer scientific funds, set broad educational policy, or consider whether to go to war with people who have different cultures, values and ideas?

If so, how can we not talk openly—even critically—about religious beliefs in choosing our leaders?