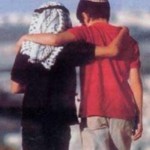 With news reports mostly emphasizing the Israeli government’s wariness about events in Egypt, here’s an interesting development: It took the Arab-run news outlet, Al Jazeera, to run a piece about Jews being supportive of the Egyptian people’s self-determination.

Ever since the victory over the dictator of Tunisia and the subsequent uprising in Egypt, my email has been flooded with messages from Jews around the world hoping and praying for the victory of the Egyptian people over their cruel Mubarak regime.

Though a small segment of Jews have responded to right-wing voices from Israel that lament the change and fear that a democratic government would bring to power fundamentalist extremists who wish to destroy Israel and who would abrogate the hard-earned treaty that has kept the peace between Egypt and Israel for the last 30 years, the majority of Jews are more excited and hopeful than worried……

We hope that Egyptians will hear the news that they have strong support from many in the Jewish world. We are not waffling like Obama – we want the overthrow of Mubarak, the freeing of all political prisoners, the redistribution of wealth in a fair way, trials for those who perpetrated torture and other forms of injustice, and the democratisation of all aspects of Egyptian life….

Again, this appeared on the website of Al Jazeera. If that’s not an intriguing development, I don’t know what is. And wouldn’t it be helpful to hear more voices that don’t perpetuate stereotypes, or the unnecessary simplification of “one group against another” that defines so much coverage?