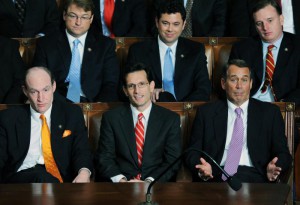 During the president’s speech, I kept my eyes and ears peeled for anything that a journalist might want to pursue. Here are some random thoughts:

Obama and Congress paid tribute to Gabby Giffords, on the mend from the massacre in Tucson—but Obama said not a word about the explosion of guns into nearly every corner of the land. As for the Republican response, Rep. Paul Ryan said, “there are no words that can lift the sorrow that now engulfs the families and friends of the fallen.” Actually, there certainly could be some words—and they’d have to do with beginning a frank conversation about guns. The situation has gotten so bad that sales of Glock semiautomatic pistols actually surged in Arizona after the shootings. Meanwhile, journalists in Texas, believe it or not, apply for gun permits because it gets them into the state capitol faster than without a gun. No joke. Go here for more on this.

If you want to know how the Republican Party has evolved, just watch House Speaker John Boehner sitting behind Obama. What does he and does he not applaud? I took some notes, and here’s what I recall: Anything in the interest of poor people: no applause. Anything that hints at penalizing the interests of big money: no applause. Stop subsidizing oil companies: no applause. Create high speed rail to reduce carbon footprints and other pollution: no applause. Get rid of rules that unnecessarily burden business, but keep safeguards that protect the public: no applause. Cheaper prescriptions under Medicare, and let students stay under their parents medical coverage: no applause. Cut tens of billions in military spending—at the advice of the Pentagon, but not make cuts on the backs of the most vulnerable: no applause. End tax cut extensions for the wealthiest two percent: no applause. Celebrate the independence of the horrifically suffering people of South Sudan: no applause. US stands with the people of Tunisia, trying to get their own democracy, and supports the aspirations of all people: no applause (I think—the camera I was watching turned away about then). General statements about the value of teachers, farmers, and especially honoring soldiers—applause.

Obama mentioned that every day American families sacrifice to live within their means, and that it is reasonable to expect government to do the same. What about those who benefit the most from the ways in which the system functions, and don’t have to worry about “living within their means” because their means are so incredibly, obscenely unlimited? What is their obligation?

Obama talked about medical malpractice reform. There’s that “reform” word again, always telling us that the change is by definition a good one. But of course, we’re not talking about reducing malpractice itself, just the ability of ordinary people to use the courts when alleged malpractice takes place. Also, while we’re on the subject of misusing the courts, what about the litigation that chokes up so much of the capacity—initiated by corporations to intimidate critics, force less well-heeled opponents to capitulate, and generally use lawyers as a sort of surrogate army on a battlefield of daily life? Any reform there?

Obama offered the usual paean to college education for everyone. But I’ve seen statistics on the appalling end product of so many college educations. People who were never interested in what they were taught, didn’t want to be there, forgot whatever they might have memorized almost immediately, never read a book again after graduation. In Europe, by comparison, high school is where everyone gets the basics they need to be a good and functioning citizen and worker. Many don’t go to college, but rather straight into a trade or into vocational training. And there’s no appreciable difference in their literacy or worldliness as compared to most American college grads. So, college is good in general, but let’s have a more intelligent discussion about what really is, to be fair, an industry in this country.

That statement mocking the waste inherent in one government agency regulating freshwater salmon and another regulating saltwater salmon – and joke about who regulates smoked salmon, just encourages a kind of no-nothing attitude. After all, government departments are not generally built around species of fish. If a fish is brought to school, would Obama like a single department to still be tracking it?

Iraq: absolutely no mention of the elephant in the room. Obama, to be sure, got stuck with somebody else’s mess, but why, oh why, were we really there in the first place?

Opening colleges to military recruiting. I didn’t see much immediate controversy around that, but why not? Should our educational institutions, already, as noted above, a kind of factory, be providing cannon fodder for wars that, as noted above, we don’t understand?

Finally, the main thing that struck me about the GOP response was use of the terms “limited government” and “self government.” These sorts of notions, not properly examined, are pretty useless. With ongoing consolidation in so many industries, we’re really not choosing between big government and self government, but between trying to get someone in a government office to listen to us and trying to get some outsourced person in India to listen to us. Seems like we need a whole new way of talking about, and thinking about, the real choices we have.

That’s about it. Thanks for listening. [Applause] [Or not]