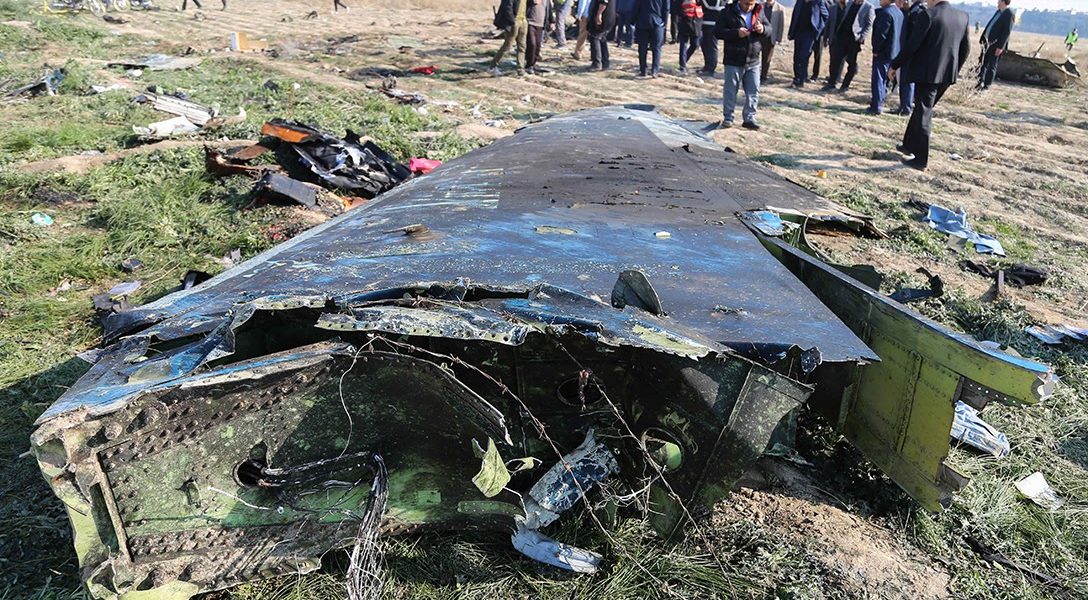 Update: Iran admitted on Saturday that it accidentally shot down Ukrainian International Airlines Flight 752. It initially denied involvement, as reflected in this article, published on Friday.

There is something odd about the New York Times‘s video of what is apparently the missile strike that brought down a Ukrainian airliner near Tehran on Wednesday. The video, posted Thursday afternoon US time, comes from what appears to be a handheld camera, not some mounted security camera that just happened to be pointed the right way at the right time.

People don’t normally point a camera toward a black sky for no reason. Did the photographer know what was about to happen? If so, does that cast doubt on the official explanation that the strike was an accident? (The Times said someone named Nariman Gharib “provided” the video, though not that this person filmed it.)

The clip is one of two posted on the Times site showing the last moments of the doomed Ukrainian International Airlines flight 752, which had just departed Tehran’s Imam Khomeini International Airport at 6:12 AM local time, bound for Kyev. One clip shows what appears to be the fiery streak of a missile just as it strikes the airliner, and the other shows a plane in flames as it dives toward the ground, then a bright flash as it crashes.

A third video of the event turned up on YouTube Friday afternoon. It appears to have been taken from a moving vehicle driving parallel to the plane’s flight path, and follows it as it explodes in midair and plummets to the ground, igniting a huge fireball. It’s not clear who took the video or what attracted the person’s attention to the plane in the first place. The plane could have been on fire when the photographer noticed it, though it’s hard to tell given the distance to the plane.

It’s not clear why anyone would be videotaping planes at 6 AM, though there are several possibilities. The photographer who caught the strike could have been on the lookout for an Iranian missile, given the conflict of the previous few days, and thought the plane might be one. The video could be the work of a plane-watching group that had no idea what was about to happen — though it seems unlikely that even an ardent plane fan would film from such a distance so early in the morning.

Another possibility is that two missiles were fired at the plane and that the video caught only the second. The Times story cited an unnamed and unquoted US intelligence official as indicating that “a Russian-made Iranian air-defense system fired two surface-to-air missiles at the plane.” The first might have alerted the photographer, who could have responded in time to capture the second. According to the investigative website Bellingcat, “The New York Times reported that the person filming started doing so after hearing ‘some sort of shot fired,’” though there was no such quote in the Times’s online story as of Friday morning.

Officials have not been definitive on how many missiles were involved. The Wall Street Journal notes that Canada and the UK contend that one missile was fired, while US officials say two were used.

The website Aviation Geek Club quotes military-aviation expert Tom Cooper as writing that there were two missiles, citing “the poster of the video” as his source.

The Journal quotes unnamed US officials as saying that Washington has a “high level of confidence” that an Iranian missile struck the plane, likely by mistake. One official told the paper that the plane was being tracked just before it went down by an Iranian radar system used to aim missiles, and identified the fatal weapon as a Russian-made SA-15 surface-to-air missile. Tehran denies that it was an Iranian missile.

Bellingcat posted photos of what appear to be parts of a Russian-made Tor M-1 missile lying on the ground in what it said was “likely” Parand, a residential area roughly 10 miles from the reported crash site. Parand is the point from which the strike video was filmed, according to the Times, citing evidence provided by Maxar Technologies, a space technology firm, and FlightRadar24, a flight-tracking company.

Photographers have caught unexpected events on video by accident. At least two handheld cameras caught the first plane flying into the World Trade Center on September 11, 2001. But those were taken during daylight and involved landmarks far more likely to attract routine attention than the ascent path of an Iranian airport at 6 AM.