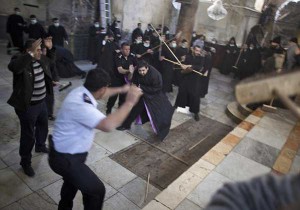 Priests have at it in Bethlehem on Christmas

The Church was designed for this kind of thing. This is how the power elites keep power. Ever hear of the Amalekites? Canaanites? Philistines? This stuff is encoded in those books and into whatever they do to the synapses in peoples’ brains!

Nice play on words, points to a more enlightening level of analysis.  But you have to be able to rise above APA-style reductivism to see it.

IOW, there’s more to being human than is plotted in APA’s journals.  Back in the late 1950s, depsite Robert Oppenheimer’s warning: not to base psychology on Newton’s outdated mechanics; APA went and reduced us all to the same fundamental unit: an imaginary point in an imaginary vacuum.  Why?  The better to weaponize psychology into PSYOP.

By now, we’re all painfully aware of how APA and DOD have weaponized psych into PSYOP, right?  They don’t see us as humans being aware of our own role in our own becoming.  We’re just automata, mechanisms fully amenable to being jacked around by the application of just the right external stimuli.

A similar invalid reduction has reduced comparative mythology to nonsense.  That’s my beef with the dismissive term, “crackpots.”  We’d be wise not to so underestimate our adversaries.

By what power does reality, so called, come into being?  By sheer kinesis alone?  Hardly.  There’s also its dance partner: kenosis, the power of translucent leaves of grass bursting through thick layers of asphalt.

That primordial power has a name: the power of myth.  Most people, however, have learned to use the term ‘myth’ as merely an intellectual’s synonym for ‘lie.’  A myth most certainly is not a lie, it’s a metaphor for a way of being properly human in the world.

The power of myth powers “dog whistle” politics.  The power of myth speaks for the unspoken, to which words like these can only refer.  It’s the power that brings tears to our eyes, makes our hair stand on end, sends chills down our spine, etc.

So when “crackpots” say things like, “Saddam did 9/11,” they’re speaking on two levels.  As with any artful endeavor, it’s all about the subtext, right?

Getting back to my point, about APA and DOD first reducing us to Newtonian voodoo dolls, then weaponizing what is meant to heal and turning it against us: It would be more powerfully explicative to treat of these events as PSYOP assaults on the body politic.  The Pentagon has spent billions developing these secret weapons; they use them as weapons, for battlefield prep; we would be wise, IMO, to treat them as weapons.  Bluntly speaking, our own armed forces are attacking us right fucking now.  Yet we dismiss these attacks with the same kind of arrogance with which we dismiss the psychic wounds of veterans.  Before the wars come the PSYOP, get it?

Likewise, it would be far more powerfully explicative to see the acts of “crackpots”  in their proper context: weaponized comparative mythology, ie, MYTHOP.  Even the most cursory glance at US history reveals a zealous use of religions as weapons.  But there’s a lot of confusion about them, as indicated by the pun on religions (above).

So WTF is a religion, anyway?  A religion is to a mythos as an application is to an operating system.  Islam, Judaism, and Christianity are applications of the older Persian mythos of Zoroaster.  How’s that for an irony of mythic proportions?  All three believe in a cosmos that used to be pure good, but now has been corrupted by an evil-doer.  Broadly speaking, Life is believed to be a holy war of us good guys against them bad guys.  We can expect no lasting peace from people who believe Life as Holy War is the epitome of the Good Life, now can we?

All this would be cconjecture, were it not for this simple fact: Joseph Campbell, the power of myth-master himself, lectured for decades for State’s Foreign Service Institute, beginning in 1956.  Wrap your APA-style mind around that.  The State Department and the intel community, according to F. William Engdahl in a recent interview with Sibel Edmonds and Peter B. Collins, “weaponized democracy and human rights.”

So, while so many ever so modern Americans equate myths with lies and dismiss weapons-grade words of war as “spin,” the very primordial power that brings into being this world stage on which we’re playing our notorious parts has been weaponized and turned against us.

In that interview, Engdahl went on to say, the powers that be have a titanic flaw, an Achilles heel of mythic proportions: “they think they’re
gods.”  That’s why they think they can assert “full-spectrum dominance” over all earthly life, forever.  They’re fucking insane, driven mad by the weaponization of the power of myth.

My point?  PSYOP and MYTHOP are the state-of-the-art weapons in the manufacture of consent.  We would be wise to see them, and treat them, as such.