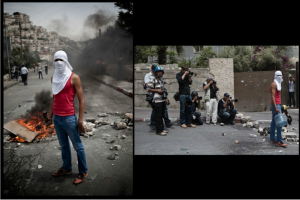 A photograph or video can be misleading. The adage that “the camera never lies” has itself never seemed more unreliable— in an age where visual documentation can present a warped or even entirely false picture of events for purposes of propaganda or sensationalism. The toppling of the statue of Saddam Hussein in Firdos Square is a famous example of how what’s reported does not necessarily reflect reality. On that occasion, what was portrayed in the western media as a spontaneous demonstration against a hated dictator by his former subjects was in fact an event orchestrated for cameras by American-led coalition forces. Recently, Italian photographer Ruben Salvadori has offered a new perspective on photojournalism within the context of conflict by turning his camera back onto his fellow journalists. His photo essay Photojournalism Behind the Scenes explores the process of conflict-image-production in an area of East Jerusalem where Palestinian riots against Israeli forces are a weekly occurrence. In the accompanying video Salvadori questions the role and influence of journalists in conflict situations by “breaking the taboo of the invisible photographer.”

This may be seen as the latest salvo in what has been variously dubbed ‘Pallywood’ and ‘Hezbollywood’ by pro-Israeli media watchdog advocates, terms used to describe the phenomenon of manufacturing documentation about the Israeli-Palestinian conflict. In 2005 Boston University professor Richard Landes produced the documentary Pallywood: According to Palestinian Sources, alleging specific instances of media manipulation designed to win the public relations war against Israel. It was a rebuttal in kind to the 2004 documentary Peace, Propaganda and the Promised Land, which accused the US media of distorted and pro-Israel coverage on most of the major news networks. Both documentaries presented specific examples of intentional misrepresentation or invention of reported events by the media.

Photojournalism Behind the Scenes sheds new light on how the situation in Israel and Palestine continues to be as much a war waged through means of PR and the media as it is a physical conflict. By drawing attention to this hidden dimension of the conflict, it offers a criticism of the media industry’s demands for dramatic photos – demands that have led some journalists to look for and create drama where there is none. Developing his project beyond this area, Salvadori now aims to investigate other conflict zones such as Afghanistan and Pakistan.

Photojournalism Behind the Scenes [ITA-ENG subs] from Ruben Salvadori on Vimeo.